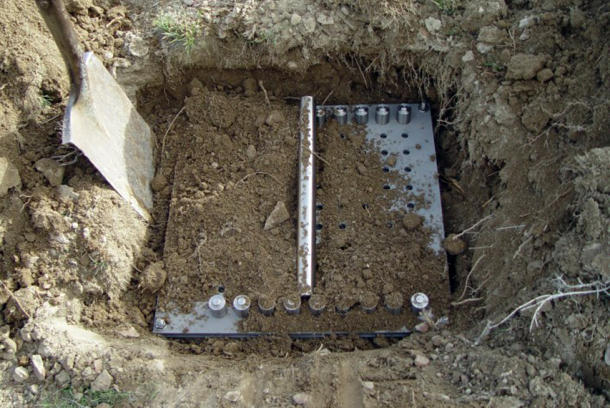 Have you heard of Jason Rohrer, fellow puzzlefiends? If you haven’t, he’s a game designer with style and a keen eye for long-term planning. Specifically, a few thousand years in the future.

He masterminded A Game for Someone, the winning entrant in the “Humanity’s Last Game” challenge at this year’s Game Design Challenge. It’s a game he designed and tested with computers, so it’s never actually been played by human beings. He had the game pieces and board constructed out of titanium, and used specially chosen paper to record the rules.

Then he buried the game somewhere in the Nevada Desert.

Here’s where the puzzle aspect comes in.

He distributed lists with hundreds of potential GPS coordinates to various GDC attendees — one million possible coordinates in all — and left it in the hands of his audience.

From an article on Polygon.com:

He estimates that if one person visits a GPS location each day with a metal detector, the game will be unearthed sometime within the next million days — a little over 2,700 years.

Somehow, given the Internet’s penchant for crowdsourcing, I suspect it’ll be found a little sooner than that.

Let’s put a puzzler’s mind to the challenge.

You combine all of the lists of possible coordinates, and run them through a computer, which can organize them on a map based on location. Not only will this allow you to hit multiple coordinates nearby in one fell swoop, but it will help eliminate unlikely or impossible options (like anywhere easy digging isn’t so easy).

Then distribute your coordinated maps to a team of dedicated diggers — these delightful pups come to mind! — and get to work. A small army of geocachers could probably knock this out in a month or two.

Heck, if I wasn’t too busy trying to decipher the cryptic poem behind this treasure hunt, I might take a crack at Rohrer’s challenge myself.

2 thoughts on “Finding the game IS the puzzle.”