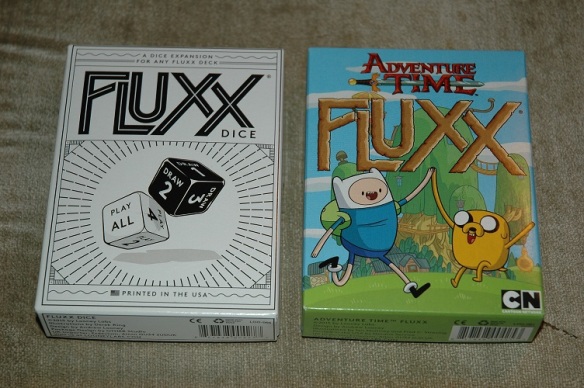 The flagship game of the Looney Labs brand, Fluxx, at its core, is a card game that mixes flexibility and strategy in gloriously chaotic fashion. The basic mechanics of Fluxx — collecting keeper cards in order to complete a certain goal — remain the same each time you play, but with constantly shifting rules and goals (as well as obstacles your fellow players employ), every time you play, it’s a brand new game.

And quite honestly, given how often the rules change during a game, I didn’t think Fluxx could get more chaotic.

Fluxx Dice adds five cards to your Fluxx deck, and they all concern using (or not using) the two Fluxx Dice to change how many cards you draw per turn and how many you play per turn.

The addition of dice-rolling randomness to an already hectic game offers a level of unpredictability that even a well-shuffled deck cannot. Especially since a sufficiently tactical Fluxx player can often overcome the game’s inherent instability with the proper strategy. But no one can prepare for a chance roll of the dice!

Although I’ve only tried Fluxx Dice with the standard game, Batman Fluxx, and today’s other review product so far, I can confidently say that you will not believe how big an impact five little cards and two dice will have on your gameplay. What a terrific way to add a touch more luck and consequence to a game that already employs both so deftly.

This brings us to Adventure Time Fluxx. 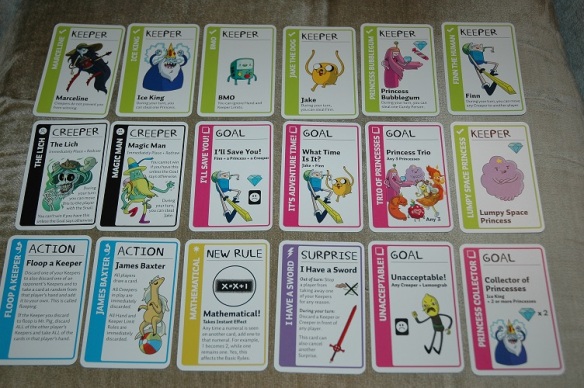 [A small sampling of cards given the Adventure Time touch.]

Adventure Time is a Dungeons and Dragons-inspired cartoon show about a boy named Finn and his best friend, a shape-shifting dog named Jake, as they have adventures in the Land of Ooo. In a world populated by talking sweets, numerous princesses, and monsters galore, Finn and Jake must deal with the return of magic to the world and the aftermath of the Great Mushroom War.

As you can see, the show’s fingerprints are all over this themed Fluxx deck, and given that the show itself has a very strong “anything can happen” vibe to it, this is clearly a match made in heaven.

[Two of my favorite characters become valuable Keeper cards in this edition of Fluxx.]

Although I hoped some of the cards would offer fans of the show gameplay incentives — akin to the Batman Fluxx card that rewarded players wearing something with the Batman symbol on it — my fellow players and I did come up with an appropriate Adventure Time-fueled variant.

Each time a keeper card was played, the person who played it had the opportunity to repeat a quote or popular line from that character. If they did so, they received either an additional card to be played immediately OR a roll of the Fluxx Dice to alter the current rules of the game.

For a show that rewards sharp-eyed attentive viewers with in-jokes and humor, this felt like a suitably Adventure Time-y wrinkle to add to the game.

The family of Fluxx games continues to grow, and although Adventure Time Fluxx didn’t really bring anything new to the table gameplay-wise, the immense charm of its themed cards and references to the show still make it a worthwhile addition to any Fluxx fan’s collection.

And as for Fluxx Dice, it may be a small set, but in terms of sheer gameplay impact, it packs one heck of a punch.