Welcome to a very special edition of 5 Questions!

Usually, 5 Questions is simply that: five individual questions answered by our guest. But this time around, we’ve ditched the 5 Q format in lieu of a more relaxed, conversational interview. I hope you enjoy!

Escape the Room games started as a video-game phenomenon, but have since moved into the real world with great success as teams are tasked with physically finding clues and solving puzzles in order to escape! 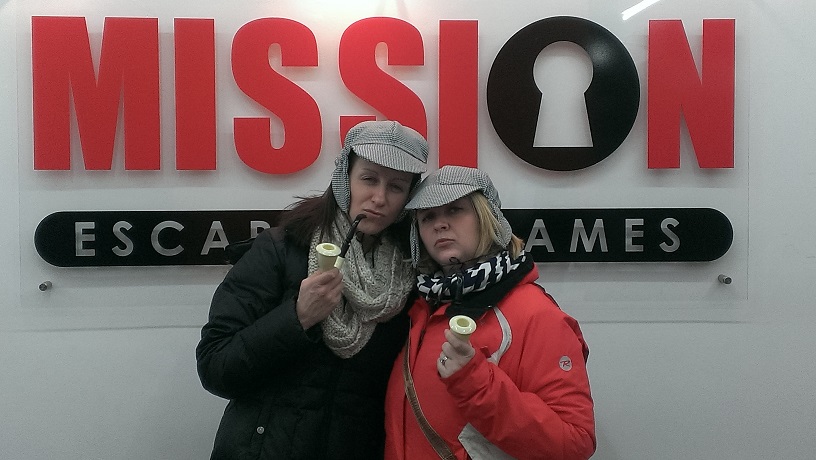 [Darcy, right, poses with another solver, complete with
deerstalker and Meerschaum pipe a la Sherlock Holmes.]

Penny Dell Puzzles social media coordinator (and friend of the blog) Darcy recently tackled the challenge posed by Mission Escape Games, and she was gracious enough to take the time out to answer some questions about this intriguing puzzle-solving experience.

So without further ado, let’s get to it in a very special edition of 5 Questions!

So, Darcy, correct me if I’m wrong, but your friend invited you to be locked in a room with her, with only your wits and cunning to help you both escape within a certain amount of time? How did this come about?

As unfavorable as it may seem, it was actually a birthday gift. My husband bought me tickets to Mission Escape Games in NYC, and we went with a group of friends.

Oh, so how many of you could be in a given escape room? (I’m assuming there is more than one.)

There are a few rooms. We had 9 people in our room. Our group was teamed up with another group to find out what happened to Dr. Jekyll before Mr. Hyde showed up.

All the other rooms have other themes, and the owners try to change up the challenges frequently. That’s so people can keep coming back and playing something fresh, but also so others who have played won’t give away the secrets of how to escape

So your group and another team are all in a room together. What does the room look like? Is there someone there to guide you and answer questions, or are you on your own?

You’re on your own! We were told that we had an hour to escape and to look everywhere — and they mean everywhere — for clues. We walked into a small Victorian-era room with a fireplace and other period props and just started searching. We upended tables, took out drawers, you name it.

Many clues didn’t make sense at first, but as the game progressed, we realized every clue was there for a reason. There was also a small TV screen in the corner of the room that very ominously counted down your time.

But as we found out, the TV screen served a dual purpose. We had someone watching us the entire time who would provide clues, if necessary, through the screen.

Can you give us an example of some of the clues you found, and how they made more sense as the game progressed?

Not to give too much away, but we found a key that seemed to have no relevance at first, since it didn’t open the only door in the room. We soon discovered our little room was not as small as it seemed. 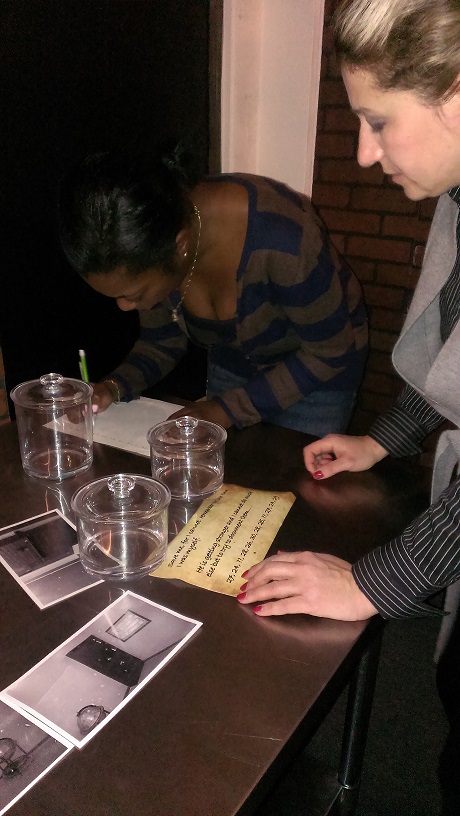 Most clues turned out to be more than they seemed at first. There were a lot of puzzles solved by trying to find out what was missing, rather than where something was hiding.

You said that the people running the game could give you clues through the television. Could you elaborate on that?

If we got stuck, we could ask for a hint. At one point, we were all standing over a chess board, befuddled because we knew it needed to come into play, we just didn’t know how. After discussing chess moves for a while, the TV screen showed us a poem using the words “King,” “Queen,” and “Knight.”

This reminded us that much earlier, we had found a deck of cards, so we knew that the deck of cards and the chess board were both necessary to solving that part of the puzzle.

How long did you have to escape?

Technically, no. But we came so close, our “handler” gave us an extra two minutes to finish. 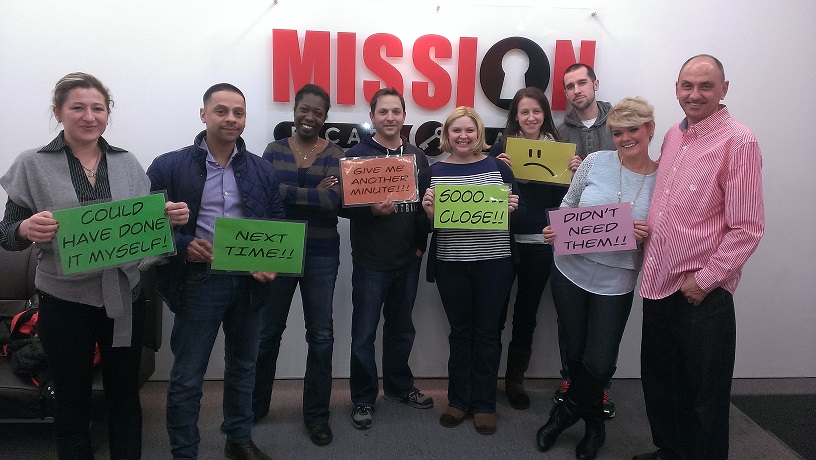 Do you feel like a bigger or smaller group would have helped more?

You know, at first I wasn’t so sure about working with complete strangers, but by the end of the mission, I felt that every single person contributed in some way.

In my case, the more people present, the more knowledge brought to the table. For instance, I’m terrible with numbers, but others in the group used their very strong math skills to keep us afloat. My strength is in brain teasers and optical illusions, so I could help identify some of the riddles and visual tricks.

So you would definitely go again?

Absolutely! We had such a good time! We made new friends and, despite not escaping in time, we still felt very proud of ourselves.

Many thanks to Darcy for her time and her story about Mission Escape Games! You can check out her social media skills on the Facebook and Twitter accounts for Penny Dell Puzzles!

3 thoughts on “(More Than) 5 Questions: Escape the Room edition!”