When it comes to games, chess is a certified classic, the benchmark against which many tactical games are still measured to this day.

We’ve discussed chess several times in the past here on the blog, whether we’re talking products inspired by chess, like All Queens Chess and Scrimish, or tackling puzzles using chess boards, like knight’s tours or other chess-based brain teasers.

In today’s post, we’ll be looking at a new variation on chess, one meant to dissuade players from careless gameplay by use of a historically appropriate method of enforcing the rule of law: the guillotine. 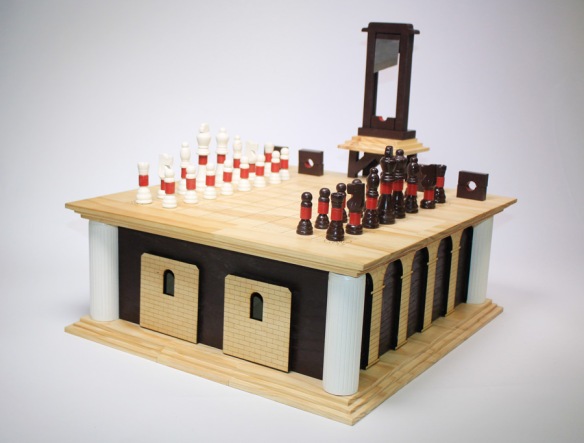 According to the creators:

Tour De Force chess entices the players to strategize and invest more thought into the game by introducing consequence in the form of a guillotine that beheads captured pieces. Based on early testing with a rough and ready model we confirmed that this game addition makes the prospect of losing a piece unsavory enough to motivate more careful strategy.

You see, in Tour De Force chess, a captured piece isn’t gone immediately. It goes into the stockade until another piece is captured. There are two stockades, which means that once your opponent captures a third piece, that first piece goes to the guillotine, loses its head, and is gone for good.

Not only is this meant to enhance the feeling of loss that comes with having a piece taken, but it introduces an interesting mechanic to the game: saving pieces from a nasty end. 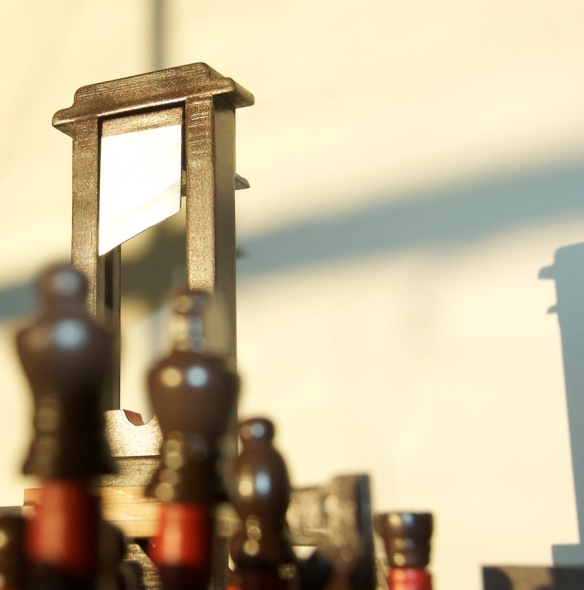 According to the official rules, “a player can save a captured piece that has not yet been beheaded by taking a higher value piece with a pawn. That pawn is then substituted with the piece closest to beheading.”

Although the higher-value rule means that there’s no saving your captured queen (unless you capture the king, which of course, ends the game anyway), it is an intriguing wrinkle to standard chess that could definitely alter your gameplay. Do you continue to play as you always would, immediately accepting the consequences when a piece is lost? Or do you try to rescue that piece, diverting temporarily from your primary goal of capturing your opponent’s king?

What do you think, PuzzleNationers? Is Tour De Force chess a welcome variation to the game, or an unnecessary twist on a classic? Sound off in the comments below!

2 thoughts on “This chess game will cut you to the quick!”