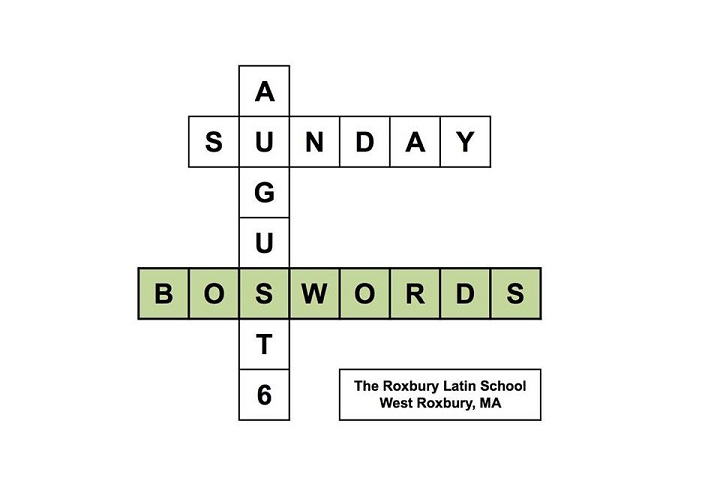 I finally had a chance to sit down and try my hands at the puzzles from the BosWords Crossword Tournament earlier this month. Given the talent involved, I had high expectations, and I was not disappointed.

So let’s put them under the microscope and see what’s what!

The unscored opening puzzle in this year’s tournament was a warm-up to get everyone in the mood to solve. Its theme was simple and accessible: The circled letters in each long answer — the first two letters and the last two letters — spelled a synonym for “friend” (DU and DE in DUAL ACTION BLADE).

Interesting grid entries included OLD ELI, TREVOR NOAH, LEMUR, and PONY UP, and my favorite clues were “One taken for a ride” for SAP and “Luke Skywalker saw two from Tatooine” for SUNS.

A very smooth, very fair solving experience, Puzzle 1 is exactly what the first scored puzzle of a tournament should be. It sets the tone, the difficulty, and whets your appetite for more. The clever use of SCHOOL’S OUT as a revealer for the game — phrases where SCHOOL has been swapped for OUT, as in SECONDARY OUT — even has the pleasant side effect of getting the song stuck in your head.

Interesting grid entries included TROTSKY, CAT SCAN, and X FACTOR, and my favorite clues were “‘Ghostbusters’ vehicle, before it was Ecto-1″ for HEARSE and “They might get smashed at parties” for PINATA.

I have no notes for Puzzle 2, because it wasn’t included in my Solve at Home packet. The puzzle, constructed by Andrew Kingsley and John Lieb, was used in the tournament with Will Shortz’s permission (as it was already earmarked for The New York Times).

The puzzle was published on Wednesday, August 16, if you’re interested.

It appears that Puzzle 3 will be BosWords’s version of the American Crossword Puzzle Tournament’s infamous Puzzle 5, as this was the toughest themed puzzle in the set. However, as you’d expect from a Quigley puzzle, there was lots of intriguing fill, and a diabolical theme: long phrases that included the name of a college, but the college was swapped with the name of another college in another themed entry.

For instance, the answer THIN WHITE RICE would normally read THIN WHITE DUKE, but Duke was transferred to another line, where instead of BROWN-EYED GIRL, the answer was DUKE-EYED GIRL. All four theme entries had the name of a different college substituted in for the college that would normally appear in that phrase.

I confess, it took me a while to unravel just how this theme worked. Factor in the longer fill entries crossing those themed entries, and you’ve got a tough, topnotch puzzle.

Interesting grid entries included MALFOYS, DAME EDNA, CASSINI, DEEP FRYER, and EPONYM, and my favorite clues were “Egg foo yung, essentially” for OMELET and “It may be used by Colonel Mustard” for ROPE.

Puzzle 4: Why You Failed English by Joon Pahk

This puzzle, which played on those books we were all required to read in school, was lighter than Puzzle 3, but still kept solvers on their toes with engaging fill. (Likening “Of Mice and Men” to “Stuart Little” is hilariously audacious.)

Interesting grid entries included MONSANTO, FAN MAIL, BANFF, and HOHOS, and my favorite clues were “Paper tigers, perhaps” for ORIGAMI and “Long line at a wedding reception?” for CONGA.

This themeless puzzle — intended to settle any ties going into the final — had some impressively long entries crossing at the corners, making for a great solve overall.

Interesting grid entries included CRAPSHOOT, RECHERCHE, PLOT TWIST, EVANESCE, POKEMON, and ARIGATO, and my favorite clues were “Paris was too much for him” for ACHILLES and “Set back?” for SCENERY.

A themeless challenging enough to rival Quigley’s themed Puzzle 3, this tournament closer was well constructed and engaging, really testing solvers’ creativity, wordplay, and vocabulary. I don’t think I would have completed it in the time allotted, let alone fast enough to do well against fellow solvers.

Interesting grid entries included BINGE WATCH, IN LALALAND, DADBOD, TRUMP U, and TEA CADDY, and my favorite clues were “Eventful activities?” for DECATHLONS, “Common note designee” for SELF, and “Floral drawing?” for NECTAR.

There was also a fun, themed bonus puzzle, You’ll Have to Be There by John Lieb, included for At Home solvers, which serves as either a nice closer to the day’s solving or a second warm-up puzzle.

Overall, I was fairly impressed by the puzzles offered at BosWords. They weren’t as freewheeling as the ones typically offered at The Indie 500 or Lollapuzzoola. But they were a little bit easier than the offerings at The American Crossword Puzzle Tournament, which makes this a wonderful intermediate-difficulty event to introduce new solvers to a timed, tournament environment.

It seems like the right mix of challenge and creativity for solvers accustomed to NYT-style solving, and I think the constructors and organizers did one heck of a job putting together the tournament.

Here’s hoping next year’s BosWords is an even greater success.

1 thought on “Delving into the BosWords puzzles!”