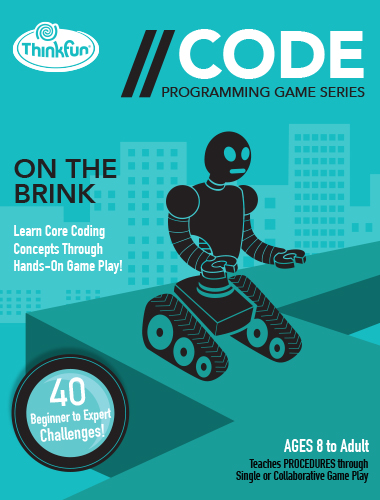 [Note: I received a free copy of this game in exchange for a fair, unbiased review. Due diligence, full disclosure, and all that. /end disclaimer]

There has been a tidal shift over the last few decades from the analog realm to digital. So much happens in cyberspace, by email, and in the liminal spaces between smartphones and computers, that it feels like we’re leaving behind physical media entirely. In the next decade, knowledge of programming will become an essential skill.

And it’s never too early to begin laying the foundation for that future. The folks at ThinkFun have been ahead of the curve there for a long time — their game Robot Turtles is a prime example — and they continue to push forward with their new //CODE Programming Game Series, a line of puzzly products designed to teach the basics of programming to young solvers. 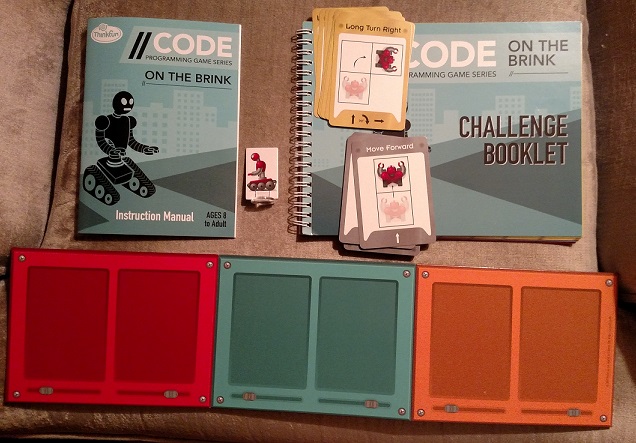 The first game in the series, On the Brink, serves as an excellent primer. The game is based around a simple concept: navigating a robot along a particular path. This path can twist, turn, and even cross itself. But it’s up to the solver to figure out how to use the available programming cards to control and determine the robot’s path.

Whereas Robot Turtles required players to be supervised by a Turtle Master who governed the setup, difficulty, and execution of commands, On the Brink can be played alone, as the solver tackles each puzzle in the challenge booklet, complete with starting cards, a given path to replicate, and colored boxes on the board that align with the three sections of the control panel. 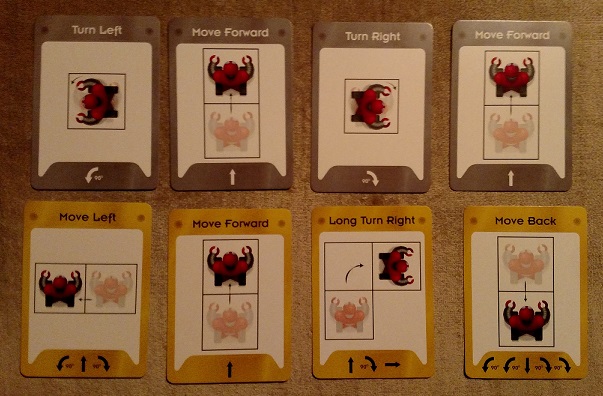 I was impressed by the amount of variety to be found in a relatively small deck of commands. A cagey programmer can navigate the robot through some unexpectedly thorny paths, reminding me a bit of the step-by-step deductive reasoning that made Lunar Landing such a delightful challenge.

One way that On the Brink improves upon Robot Turtles is with the concept of commands that continue to run once activated. In On the Brink, your robot will follow a command for as long as the programming cards and colored spaces on the challenge booklet page dictate. Just as a command in programming requires parameters in order to know when to stop, your robot needs similar commands. Otherwise, it’s liable to pass right over the finish square instead of landing there perfectly.

On the Brink invites players as young as 8 to tackle the various challenges in the booklet, either alone or in groups, and the steady ratcheting-up of difficulty teaches the young programmer as they advance, putting new wrinkles and obstacles in the player’s path. 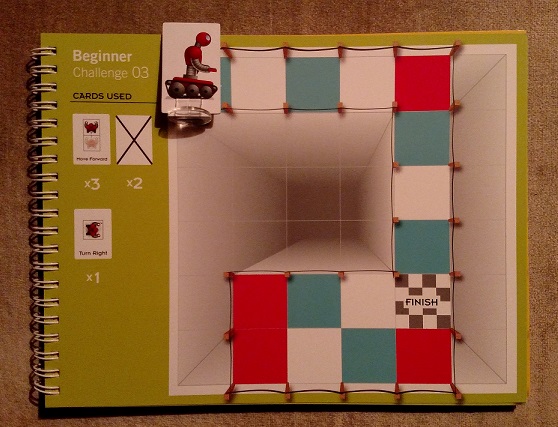 It’s the sort of patient, clever gameplay we’ve come to expect from ThinkFun, and they do not disappoint here. Figuring out how to utilize the available commands and complete the path given makes for an excellent puzzly challenge — especially the later scenarios! — but it never feels inaccessible or overwhelming.

You’re always in good hands with ThinkFun, and they’ve proven it again here with On the Brink.

On the Brink is available from ThinkFun and participating brick-and-mortar and online retailers for $14.99.

6 thoughts on “PuzzleNation Product Review: //CODE: On the Brink”