One of the Daily POP Crossword app’s best features is the level of involvement from topnotch constructors. We’ve assembled one heck of a team when it comes to creating terrific, exciting, fresh themed crosswords.

And over the next few weeks, we’d like to introduce you to some of them. Some names you may know, some you may not, but they’re all doing amazing work on these puzzles and deserve a little time in the limelight.

For our first installment, allow us to introduce you to constructor Mark McClain! 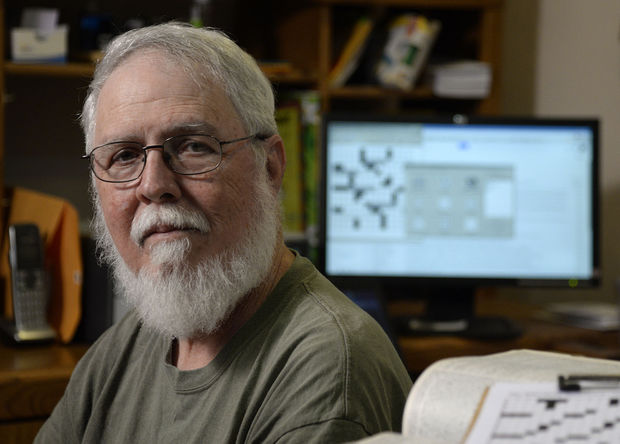 How did you get started in puzzles?

I’m a longtime fan of crosswords, but I only started constructing puzzles about four years ago. That probably makes me the newbie of the Daily POP Crosswords constructors. But I’m not a newbie otherwise, in fact I may be oldest of the crew (I was in college when the Beatles hit the music scene in the US).

My first published puzzle appeared in October 2014 in the Los Angeles Times, and since then I’ve sold nearly 200 puzzles to over a dozen venues, including a few in Penny Press magazines and The Crosswords Club.

Believe it or not, there are many crossword constructors who don’t really spend much time solving puzzles. I’m not one of them. I solve nearly every puzzle published by the venues that I regularly contribute to. It’s not only fun, but also keeps me up to date on what publishers are using both in terms of themes and vocabulary.

Patti Varol is a great editor and a lot of fun to work with. She published my very first “Sunday-size” puzzle in the Uptown Puzzle Club in February 2015 (it was a collaboration with Brad Wilber). I was thrilled when she invited me to work on this project.

It’s great that we have resolved to avoid using the crosswordese and obscure entries that still permeate some crossword outlets. This keeps the Daily POP Crosswords puzzles accessible to just about anyone who tries to tackle them. If there’s a word in there you don’t know, then I want it to be one you can actually use in real life once you’ve learned it.

I hate that some crossword constructors and editors seem to be stuck in the ’70s (or worse), and Daily POP Crosswords is the antithesis of that with the focus (mainly) on the current pop culture scene. Sure, there was a lot of great stuff way back when, but today there are so many talented musicians, actors, athletes and writers, and I’m glad to be involved in casting some light on their work in a fun puzzle format. Keeps me feeling young.

Having said that, I also appreciate that we have the “Remember When” category where we can reprise some of those great performers and events of yesteryear (I have one coming next month on the 50-year anniversary of one of my favorite movies of all time). 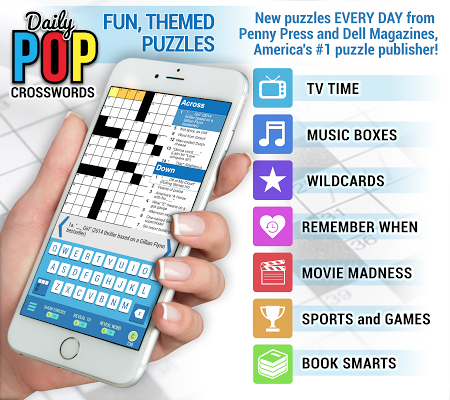 Is there a particular theme day that appeals to you most or that you enjoy working on?

I particularly appreciate the “Sports and Games” category, as I’m a big sports fan, and hate getting my wrist slapped for having too many sports references in puzzles (God forbid you’d actually submit a sports-themed puzzle).

I love trivia and lists (my partner Diana sometimes calls me List Man). It is really fun digging into the various resources to ferret out a good set of entries that will make a theme for a Daily POP Crosswords puzzle. I find it to be a lot more enjoyable than coming up with one of those tricky wordplay themes that many editors like to use these days.

The app is dynamite (does anyone still say that?). I already had the Penny Dell Crosswords app from PuzzleNation, which I use fairly often, so I was familiar with the basic design. I must admit that most of the time I am a paper solver, but I will definitly be on the Daily POP app on a regular basis.

A huge thank you to Mark for his time! Be sure to keep your eyes peeled for his puzzles in the Daily POP Crosswords app, free to download for both iOS and Android users!