When it comes to crosswords, every solver and constructor has their own ideas about what’s appropriate and what’s inappropriate.

And I don’t just mean the age-old debate of pen vs. pencil. Whether we’re talking about answer words, abbreviations, cluing styles, gimmicks like shared letters in one box, or even the number of black squares in a grid, the sheer variation and customization possible is bound to lead to differing opinions.

A recent New York Times Tuesday Mini puzzle was the source of some consternation for solvers when it turned out that the first three boxes across were intended to be filled with numbers, not letters. 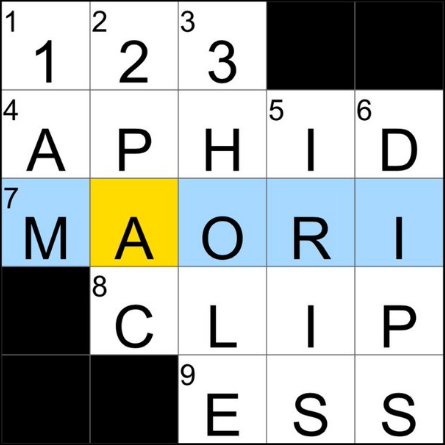 The clue? “Easy as ____,” which many solvers mistook, understandably, for PIE. When you factor in that many Times puzzle solvers value their solving speeds as well as their solving experience, the extra seconds (or minutes) “wasted” on a clue that feels misleading can be frustrating.

Some of those solvers took their concerns (and complaints) to Twitter, prompting a response from the official Wordplay Twitter account, which offered up the Easter egg that “123” referred to not only the answer to 1 Across, but also the date the puzzle appeared, 1/23.

That is a nice little bonus, but it wasn’t referenced at all in the clue, so it did little to appease those who were upset with what they consider a breach in crossword etiquette.

Although I absolutely sympathize with being unexpectedly flummoxed by a clue — it happens to me all the time as a solver — I must admit that this sort of thing doesn’t bother me. I don’t mind when multiple letters share a grid square, or if there’s a number there instead of a letter.

In fact, Alex Eaton-Salners employed the same thing in his “Read the Fine Print” Fireball Crosswords puzzle, and it made my favorite puzzles of 2017 list.

Clearly something like this is going to bother some solvers more than others. What do you think, fellow puzzlers? Does using numbers instead of letters in crosswords bother you or violate your idea of what a good crossword should be?

What about having multiple letters inside one grid square? Do you think that’s a cheat — a way to get around constructing something that actually fits the space — or a clever conceit allowing for more grid and theme flexibility? We’d love to hear your thoughts on the subject!