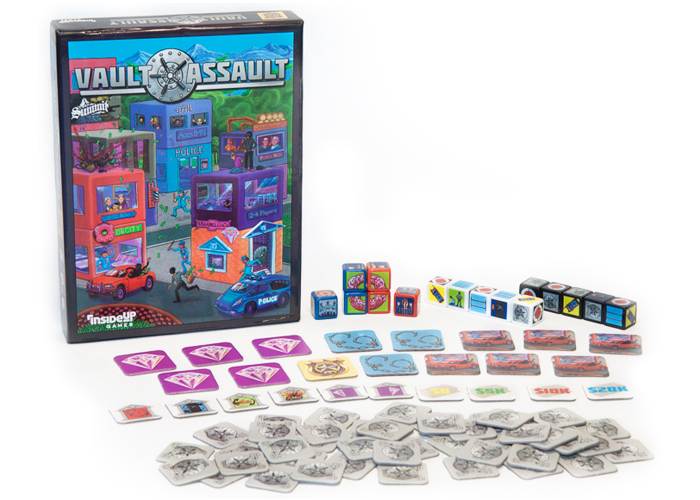 There is no rivalry in the world of make-believe more iconic than cops versus robbers, and rarely has that classic dynamic been as frenetic and as fast-paced as it is in the dice game we’re reviewing today, Vault Assault.

Each round, the players will portray both the cops and the robbers, allowing players opportunities to both rack up lots of ill-gotten gains and minimize the loot captured by the other players. 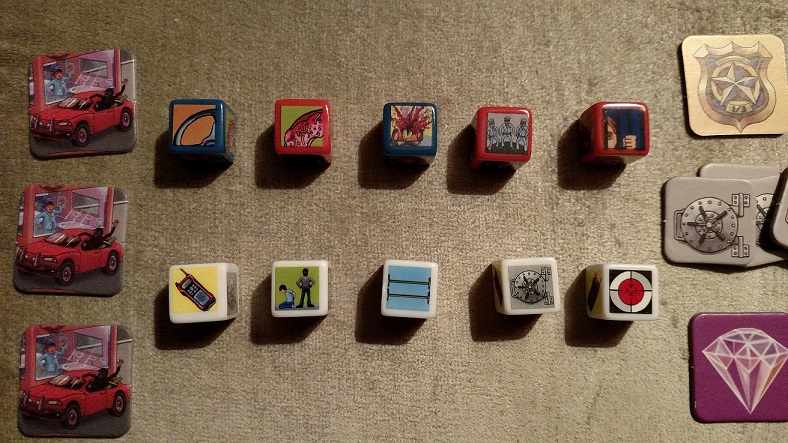 Each round consists of two phases: the Diamond Heist and the Vault Assault.

In the Diamond Heist phase, the cops and robbers each line up five of their dice. (The cops do so secretly, laying out an arrangement of three alarm symbols, one dye-pack symbol, and one diamond symbol in any order they choose.) The robbers lay out five wire symbols, and then choose one to flip, trying to match the one they flip to the diamond symbol the cops have secretly chosen.

Essentially, the Diamond Heist is part strategy, part luck as the robbers try to steal the diamond by cutting wires to the security system, while the cops lay dye-pack traps to ensnare the robbers. Either the cops will begin the Vault Assault with an advantage or the robbers capture a diamond tile as part of their loot. 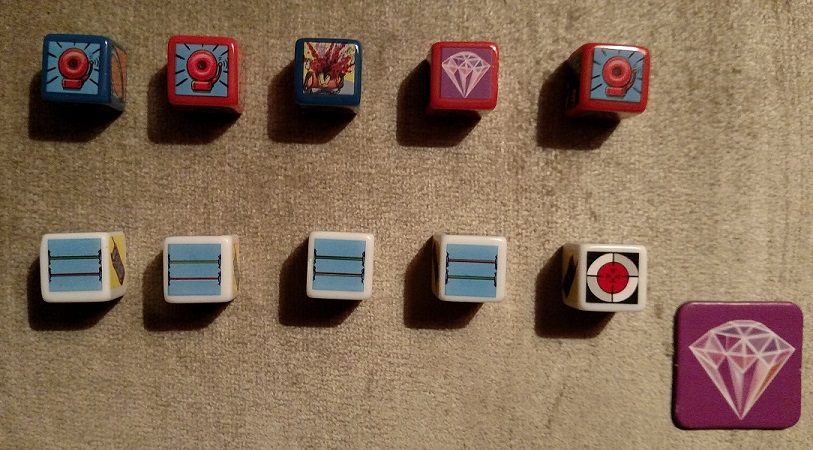 [In this scenario, the robbers chose poorly, and triggered the alarm, meaning that the cops will start with one die already rolled when the Vault Assault starts. The robbers could have opted to flip another die in the hopes of finding the diamond, but in the end, they opted not to risk giving the cops a greater advantage.]

Once the Diamond Heist phase is concluded, the Vault Assault begins, and the game kicks into another gear.

Tenzi- or Yahtzee-style dice rolling and quick decision-making become crucial as both cops and robbers try to roll specific patterns in order to complete tasks. As the robbers roll to steal from the vault (or each other), to interfere with the cops, or to escape, the cops are trying to complete rolls in order to fuel up, arrive at the crime scene, engage the robbers, and arrest them.

Both sides roll their dice at the same time, making for an incredibly chaotic and fun play experience that simulates the kind of stress you might be under if you were really robbing a bank and trying to get out before the cops arrived. Between robbers filling their coffers (and forcing the cops to reroll their dice) while the cops confiscate some of the stolen loot while trying to arrest the bad guys, it’s a very competitive and adrenaline-inducing sequence of events. 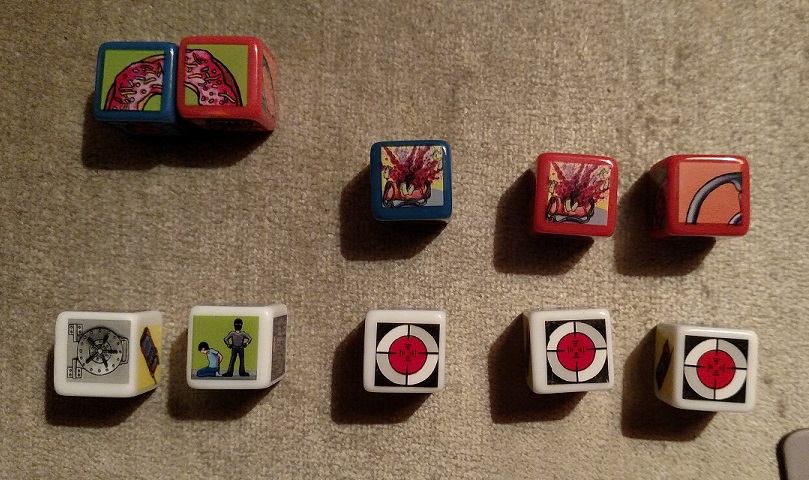 In this scenario, the cops have two out of the four doughnut symbols up (meaning they’re halfway to completing the first task en route to arresting the robbers). But they also have two dye-packs up, and two more dye-packs would allow them to remove several Vault Tiles from the robber’s stacks, meaning the robbers would have less loot. Would you choose to keep rolling for doughnuts or to hamper the robbers with dye-packs?

On the robber side, they have three targets, meaning they’re one away from stealing a Vault Tile from another player and adding to their loot. But they also have a green hostage symbol up, which they can put aside in order to make the cops immediately reroll all of their dice. Would you choose to go for the steal or to disrupt the cops’ efforts?

In addition to all that interplay, some of the vault tiles also trigger actions that can hamper your gameplay. A handcuffs symbol, for instance, means you have to roll your dice with your wrists together until the end of the turn (as if you’re handcuffed). These little roleplay-centric details add a playful edge to the game, injecting a bit of silliness into gameplay that could otherwise turn somewhat cutthroat.

One several rounds have elapsed, the players (both cops and robbers) total up the value of the loot in their getaway cars, and the player with the highest total wins. Oh, and those Diamond Heist tiles? They’re worth $40,000 apiece! 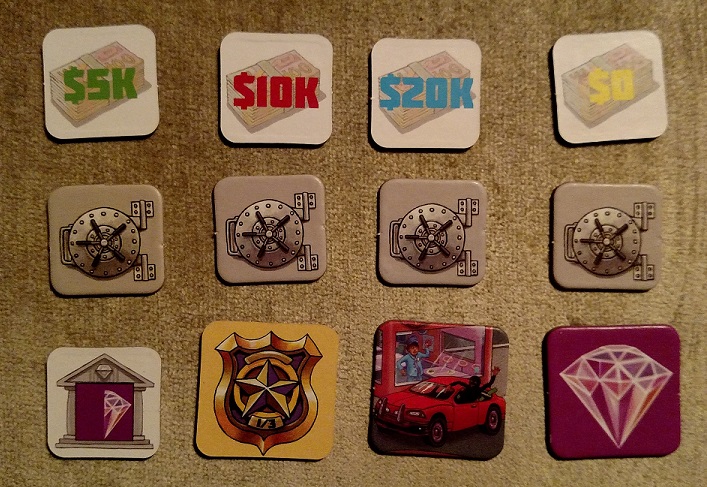 [With Vault Tiles ranging in value from 0 to $20,000, a diamond tile could be a real game-changer for your loot total at the end of the game.]

Vault Assault is less about long-term strategy and more about being able to make good decisions in the heat of the moment. If you’re able to put your puzzly mind to work making the most of the dice rolls in front of you — both to increase your profits and hamper your opponents, whether you’re a cop or a robber at the time — then you’ll probably come out ahead.

Of course, that’s more of a one-on-one mindset. And with three-player and four-player/team rules to allow for different combinations of players, you can implement some wider strategic gameplay. In three-player games (1 cop and 2 robbers), have one robber focus on hampering the cops while the other raids the vault (and then switching, so both robbers can cash in). In four-player/team games (two cops, two robbers), one cop can focus on recovering stolen goods while the other works on arresting players. There’s plenty of fun to be had with the format.

Can you cash in, hold the cops at bay, and make your escape, or will the cops nab you and all your ill-gotten goods before you make it out the door? And in the end, will you make a better cop or a robber?

[Vault Assault, published by Inside Up Games, is available through their website, as well as certain online retailers.]