If you’re looking to host a puzzly event, but a crossword tournament or puzzle hunt isn’t for you, then I highly recommend hosting a murder mystery party.

It’s an instant icebreaker if you have new people you’d like to introduce to an established group of friends, it’s a great activity that encourages communication and interaction, and it’s a fun opportunity to flex your puzzly chops in a fresh and exciting way.

Now, as you might expect, there are plenty of websites that not only offer tips for creating your own, but entire scenarios you can purchase and run right out of the box. A simple Google search (or looksy on Pinterest) will reveal a wealth of possibilities out there if you’d rather get a running start with the help of experienced hands.

Naturally, your friendly neighborhood PN Blogger has to start from scratch, because that’s just my nature. I like to tailor puzzly events specifically to the people attending, in the hopes of evoking a greater connection with the material and investing the players in the story and gameplay.

This past weekend, I ran a murder mystery by special request for a 30th birthday party, and I thought I’d share a few tips for any aspiring murder mystery party hosts out there.

Optimally, you’d like the solvers to put their deductive skills to the test, observing the scene of the crime as well as the behavior of any actors you’ve recruited in order to play characters/suspects and act out various scenarios.

But sometimes, you need to go beyond that. I highly recommend offering some sort of system that allows the solvers to gain more information, even info they might not normally be able to gather with their own senses.

In my games, I have what I call “Holmes Tickets.” They’re just pieces of paper with a silhouette of the iconic detective on them, and when cashed in, a solver can learn additional information about a piece of evidence.

For instance, a solver would probably be able to tell if an object has fingerprints on it. But by spending a Holmes ticket, they can notice something more — a smell, a distinct flaw, a connection to one of the characters — or they can ask me if a specific person’s fingerprints are on the item.

Always make sure that extra information feels worthwhile, because you don’t want them to feel like they’ve wasted a ticket. If they want to know something that someone could reasonably glean from the object, I just tell them without taking away one of those helpful little prompts.

If people are searching a crime scene for clues, it can be hard to know what’s important and what’s not. During the event I ran this weekend, one of the solvers found a pen that matched a suspicious note found near the body. Since the pen was found on a bookshelf, that solver fixated on the books nearby, looking for more clues.

That’s a natural reaction, but there were no more clues to be found there, and you don’t want solvers to waste their time on false paths (unless those are intentional red herrings). So I mark any item that’s part of the investigation with the little detective symbol above, meaning that it’s “in-game,” or part of the narrative.

Not only does that give the solvers something to look for, but it prevents them from wasting time on random objects they might otherwise assign value to.

In addition, I’ve found that laying out ground rules at the start of the event helps with this. Let solvers know which rooms of the house are off-limits or outside the game, and which could potentially contain clues. In my game, I didn’t want people rifling through kitchen cabinets or drawers or anything, so I made sure to note than everything important was in plain sight (even if camouflaged a bit).

This prevented people from pawing through the host’s personal items, as well as protecting items I didn’t want revealed until later. (For example, a key piece of evidence was hidden under a couch cushion, but I didn’t want that revealed until the third act, so I specifically said “you won’t need to open drawers or lift couch cushions or move furniture or anything like that.”) 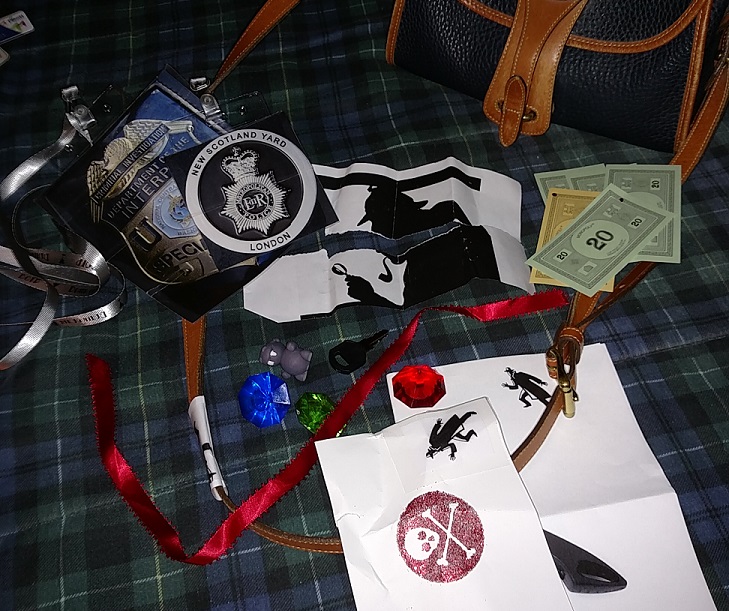 [Some of the trappings of a well-planned murder. Red ribbon for blood, a sparkly murder note, Monopoly money, fake jewels, fake badges, a torn-up Holmes Ticket, and a European miniature poisonous hippo. You know, the usual suspects.]

Without a doubt, the hardest part of planning a murder mystery party is trying to anticipate how solvers will interpret the evidence, what conclusions they will draw, and how quickly they will find certain key pieces of the story.

No matter how thoroughly you plan, no matter how meticulous your clues are laid out, solvers will invariably catch you off-guard at one point or another. That’s just the nature of the game. People make intuitive leaps, they find some clues and not others, and they stumble upon big revelations. You need to be able to adapt.

(Thankfully, as someone who has been running role-playing games for more than a decade, I’m accustomed to thinking on my feet.)

During the event this past weekend, there was a bag on the gift table with a card attached, and both card and gift were from one of the storyline characters. The card asked that the gift not be opened until this guest arrived at the party. That was intentional, so that we could put off that reveal until later in the event.

I figured the solvers would be curious, but honor that request. It never occurred to me that the solvers would instantly conspire to open the gift, search for clues, and then reset the bag as best they could before that character arrived! Yup, the solvers were more devious than I expected. One of the big revelations I’d planned for later in the game — some “precious gems” hidden at the bottom of a seemingly innocuous gift bag filled with packing peanuts (and an actual gift on top) — were about to be revealed much, much earlier than intended.

I went to plan B in my head as they opened up the gift — a red herring — and one of the solvers began digging through the packing peanuts. I readied myself to move to the second act earlier than planned, hoping to distract the solvers with a second murder.

And then… I got lucky. Despite being elbow-deep in this gift bag, the solver had somehow missed the five gemstones at the bottom of the bag. I breathed a quick sigh of relief as the players reset the gift bag and card back on the table, and went back to trying to solve the murder.

(At the end of the event, the players were astonished that the gems had been in the bag the whole time. We all shared a good laugh over it.) 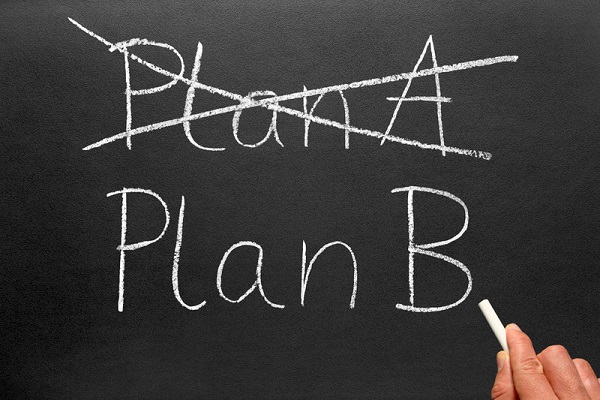 #4 Have a backup plan

I didn’t have to use mine, but it never hurts to be prepared. Always be ready to advance the plot forward if needed, to ignore plot elements that don’t engage the solvers (if they’re not crucial to the murder mystery itself), and to change your gameplan to fit the players.

It’s fine to let the players sit for a bit and chew on what they know, but never let them become bored or frustrated. Adapt the events to keep them invested.

For example, I purposely planned the second murder of the night to be slightly random. A package would arrive at the door, and the person who opened it would instantly be poisoned. There was a strong possibility that the host would open the package, so I planned for there to be an antidote nearby that would save them (it’s rude to kill the host at their own party, after all), making it an attempted murder.

But if one of the other players — out of protectiveness or out of zeal to find a new clue — opened the package first, they would be poisoned, and in all likelihood die, propelling the story forward.

Allowing for several scenarios helps the game feel more natural and spontaneous. Although there has to be some level of guidance to the storytelling, solvers don’t like to feel railroaded into making certain choices, so whenever possible, allow them to follow their instincts and pursue the investigation as they see fit.

The more that the solvers feel like detectives or contributing members of the group, the more likely they are to enjoy the solving experience.

There you go, folks. Just a few helpful tips for running your own murder mystery event. Do you have any advice for fellow puzzly party planners? Let us know in the comments section below! We’d love to hear from you!

2 thoughts on “Sometimes, Puzzles Can Be… MURDER”