I was looking over some of the crossword puzzles I’ve saved over the last year — in preparation for my yearly Favorite Puzzles of the Year post — and I noticed something.

Now, this is obviously not huge news to anyone. Although short clues offer plenty of opportunities to be clever and play with words, longer clues grant a constructor much more freedom.

After all, for every vague reference of “Wading bird,” you could have “Medium-sized wading bird with a long straight bill.” Details are a nice touch.

Sometimes, they present the opportunity to quote the clue’s subject directly: 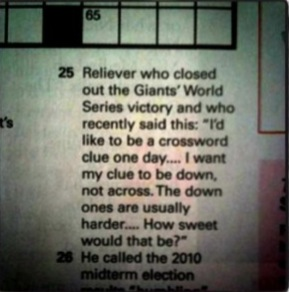 Other quotation clues simply allow the constructor to go outside the box in cluing a word commonly seen in crosswords.

June 11th’s NYT puzzle from this year is another fine example: “George Bernard Shaw wanted his to read ‘I knew if I stayed around long enough, something like this would happen'” 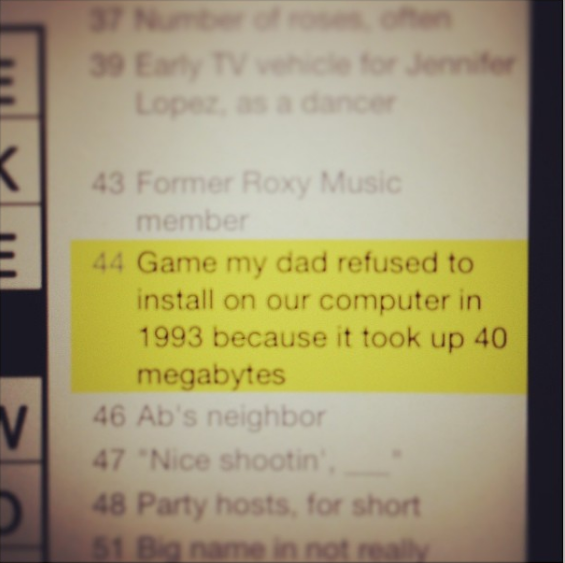 This year’s Lollapuzzoola tournament puzzles really made the most of some long clues, utilizing both humor and clever construction.

In the warm-up puzzle, several entries had the same long clue, carefully worded to apply in more than one situation: “One party in an after-school one-on-one encounter.”

In the first puzzle, we saw clues like “Movies, and some comics, but *definitely* not video games, according to some” for CANON, and “Axle attachments that always make me think of the world record holder for the 100-meter dash” for U-BOLTS.

In the final, A POST was clued “‘I have to write ____ on my blog tonight, mostly to complain about this atrocious partial in the Lollapuzzoola tiebreaker.’” (I also want to give a shout-out to the clue “Mother’s father’s daughter’s son’s daughter” for NIECE. Good lord.)

It seems like long clues are only growing longer and more creative. I wonder where this trend will take us. Will there be a puzzle where every single clue (save one) has to be short, because one massive clue will take up an entire column? Who knows.

What’s the longest clue you’ve encountered in the crossword wild, fellow puzzlers? Let us know in the comments below! We’d love to hear from you.

1 thought on “Brevity is Not Always the Soul of Wit”