One of the highlights of the puzzle year is the American Crossword Puzzle Tournament. The impressive, challenging, and well-constructed puzzles awaiting solvers there rank among the craftiest you’ll ever see.

So let’s put them under the microscope and see how I did!

Puzzle 1: And We’re Off! by Kathy Wienberg

The opening puzzle in this year’s tournament was a good smooth solve, easing solvers into the tournament experience. The theme of the word BATON being “passed” over a black square between longer entries was clever and accessible, easily cracked by tournament-puzzle standards, and the related phrases like FINISH LINE really sold the theme well.

Interesting grid entries included KOMBAT, ZAGAT, MAORI and AMOCO, and my favorite clues were “15 things in this puzzle” for ROWS and “Necessity for a farm team” for YOKE.

Joel’s contribution to to the tournament was a fun reinterpretation of a song by The Doors, BREAK ON THROUGH TO THE OTHER SIDE, splitting up the theme entries so that the second part of the answer was a food. (Example: CAPRICORN becomes CAPRI CORN.) It was surprising to have two puzzles in a row that involved answers spanning black-square breaks between entries, but the revealer with The Doors added an extra touch to this one.

Interesting grid entries included UNHANDY, MY OH MY, SCHTICK, RICOH, and APOGEE, and my favorite clue was “Inspiring halftime speech, for a sports movie” for TROPE.

The hook for Puzzle 3 was simple, but deftly executed, as the word AGE was added onto the end of established phrases like DOG POUND and CLASSIFIED AD to form new answers. But this was balanced by harder-than-expected fill, which definitely kept me guessing and ate up a great deal of the given time for solving. 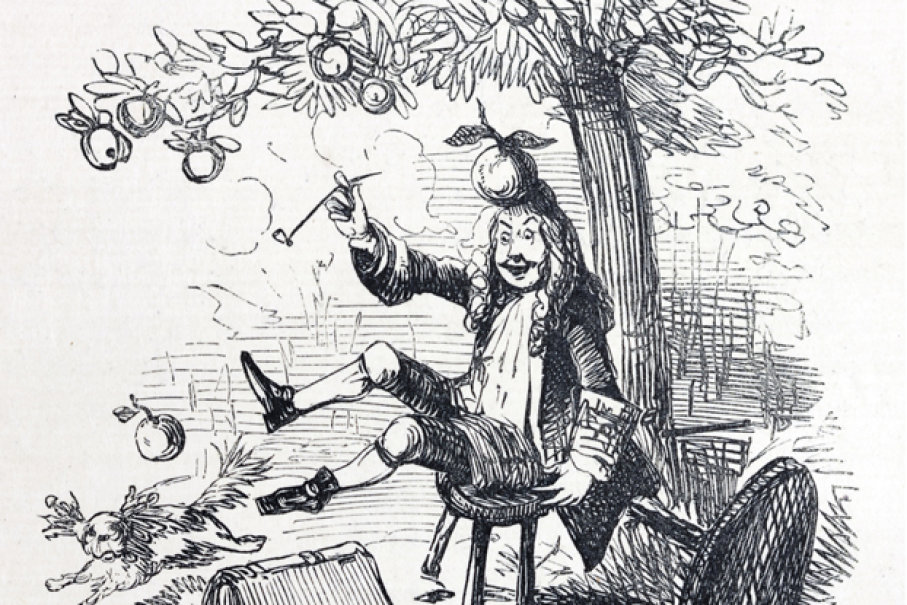 [Image courtesy of How Stuff Works.]

My favorite puzzle from the tournament, Puzzle 4 employed a brilliantly visual gimmick where two circles represented an apple and a head, with a series of I’s (and one V) forming an arrow between them. With themed entries ISAAC NEWTON, ROBERT HOOKE, and GRAVITATION, you’ve got all the ingredients for a science-themed puzzle with a very fun twist.

Interesting grid entries included GO BAG, PC GAME, TUBULAR, and ARTOO, and my favorite clue was “One who gets asked a lot of questions” for SIRI.

Puzzle 5 is infamously the most difficult of the tournament, and this year’s entry was no exception.

I figured out the gimmick pretty quick — themed entries in the same row would swap words that were also names, so the answers LANDMARK and GRANTING were actually LAND GRANT and MARKING — but the tough cluing and crafty fill entries made this a challenging solve. It was definitely the puzzle I struggled with the most. Puzzle 5, you’ve done it again.

Interesting grid entries included SPEEDO, ORVILLE, OFF NIGHT, and NOOGIE, and my favorite clue was “1986 #1 hit ‘On My Own,’ e.g., ironically” for DUET.

The first day of tournament puzzles wrapped up with this smooth, well-constructed closer loaded with delightful football puns. It was the perfect palate cleanser after the battle I had with Puzzle 5, and Lempel once again displayed her impressive skill mixing interesting fill words and balanced grid work to create puzzles with terrific flow. Blazing through this puzzle was a nice confidence boost after some tough earlier puzzles.

Interesting grid entries included CITIZENRY, ARAL SEA, MULAN, and DAUPHIN, and my favorite clues were “Adams who got the picture” for ANSEL and “Helpful feature of a crossword solver’s pencil?” for EXTRA POINT.

Day Two of the tournament kicked off with this diabolical entry where the letters PC were added to established phrases to form new entries. (For example, LOW RANKING became PLOW CRANKING, which was clued as “Starting up a farm machine by hand?”)

The theme entries made sense, but weren’t immediately intuitive, so I found them tough to come up with, even though I cottoned onto the hook pretty quickly. Combine that with creative fill entries and you’ve got a well-constructed obstacle before the tournament’s final puzzle. Devious Mr. Shenk strikes again. 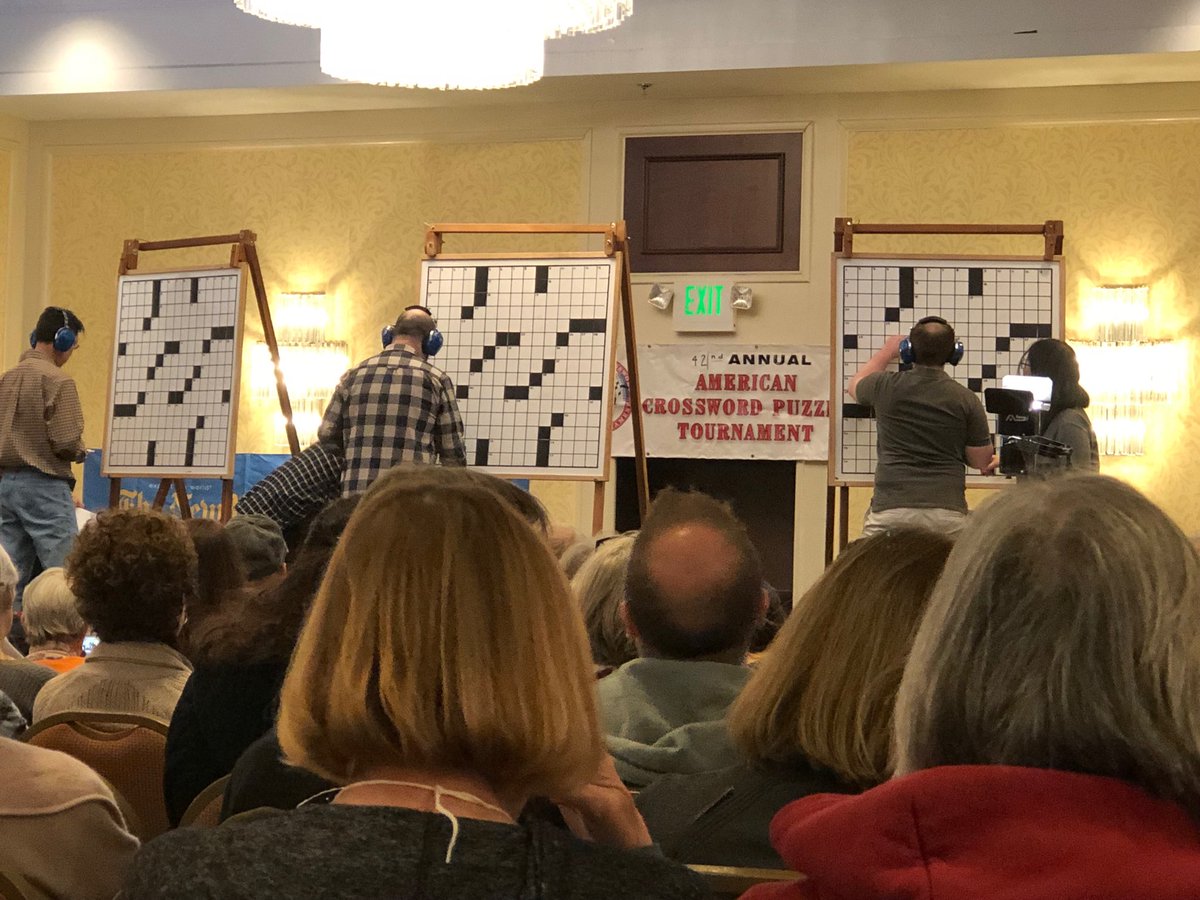 The finals puzzle for the tournament boasts a different set of clues for each of the three divisions — A, B, and C — where the competitors solve the puzzle live on stage, and Weintraub constructed a puzzle with loads of intriguing entries and personality to spare. When the puzzle both apologizes to you (2 Down was I AM SO SORRY) and checks up on you while you’re solving (50 Across: HOW DID IT GO), you’re in for a unique puzzling experience.

Confession: I attempted the A-level clues, but I struggled with some of them. I did successfully solve the puzzle with a mix of A- and B-level clues.

Interesting grid entries included CHANDELIERS, ICAHN, IT GIRL, and IN RETROSPECT, and the B-clues were undoubtedly my favorite, boasting gems like “Joins a union?” for WEDS, “Darn it!” for HOLE, and “One with a talent for hitting low pitches” for BASS.

Overall, I think this year’s tournament puzzles were not as consistently hard as in previous years, though a lot of individual fill entries were fairly obscure. I did get stuck on several puzzles, frequently outwitted by cleverly misleading clues or my own inability to come up with what would later feel like obvious answers. But, as always, I relish the challenge of trying my hand at these puzzles, even if it’s not under tournament conditions.

The ingenious and creative constructors once again brought their A-game to the table with this year’s puzzles, and I never cease to be amazed at how fast and how clever so many of my fellow puzzle solvers are, blasting through these crosswords at unbelievable speeds.

ACPT, I’ll see you next year.