I finally had a chance to sit down and try my hand at the puzzles from the BosWords Crossword Tournament last month. Given the talent involved amongst the organizers and constructors, I had high expectations, and I was not disappointed.

This unscored opening puzzle served as a fun and pleasant warm-up, getting everyone into the puzzly spirit and ready to solve. The theme entries were five films with female leads (like CLEOPATRA, FOXY BROWN, and CAT BALLOU), and the revealer TITLE NINE nicely tied the five films together through their nine-letter titles.

With good flow and an accessible theme, this is a great confidence booster and a solid puzzle to shake off any nerves going into the tournament.

Interesting grid entries included SAMOANS, ZOWIE, DEEP-SIXED, and LANDO, and my favorite clue was “Got to square 100 first in Chutes and Ladders, e.g.” for WON.

As you might expect from the first puzzle in the tournament proper, this puzzle was a fairly easy start, combining an accessible theme with interesting fill. Each of the three-letter words at the center of the theme entries spelled out a different degree one could earn, a la VET reading out in LONG LIVE THE KING.

The circles for the three middle letters in each themed entry are almost unnecessary, as between the title and the themed entries themselves, you could suss out the theme without much trouble.

(But then again, I’m a sucker for circles in a crossword grid, so I liked having them there.)

One of the theme entries was more obscure than the other three, but this was still a breezy solve to get the tournament going.

Interesting grid entries included THE UK, OBERON, SOIREE, and MASHUP, and my favorite clues were “Hacker’s problem?” for COUGH and “You don’t want to be under it” for ARREST.

Normally, you’d expect the difficulty to ratchet upward a bit for puzzle 2, but this one was pretty much on par with the first puzzle. The revealer NO FILTER explained the link between the theme entries (things like EMAIL SPAM and INSTANT COFFEE), but overall, I was a little underwhelmed by this one.

That’s not to say the puzzle wasn’t otherwise well-constructed, because it was. The longer down entries linking the themed entries were executed with finesse, and other than one tough entry (ILLINI), the fill was fair and the cluing solid.

Interesting grid entries included DOOMSDAY, TO THE MAX, IOLANI, AL EAST, and DALLIANCES, and my favorite clue was “Turns into a screenplay, perhaps” for ADAPTS.

Puzzle 3: Plus or Minus by Joon Pahk and Laura Braunstein

The increase of difficulty I was expecting in puzzle 2 arrived with gusto in puzzle 3, as the solver must figure out how to either add or remove a number from the theme entries. With the subtraction clues, it was easier, because you had the number spelled out in the entry (like STONE AGE DOOR, where the -1 in the clue indicates that the word ONE should be removed, making the more familiar STAGE DOOR).

With the addition entries, you had to get a little more creative. For instance, the entry PAT PENDING becomes PATENT PENDING when you add the +10 from the clue. It’s a clever hook, and certainly not the last time we’ll be seeing some puzzly math in this puzzle set.

Interesting grid entries included SEA MONKEYS, SQUEAK, UMAMI, and SAYSO, and my favorite clue was “Something that won’t stay hot” for FAD.

Puzzle 4: Spill the Tea by John Lieb and David Quarfoot

My favorite gimmick from the tournament puzzles appears in puzzle 4, which took me longer to figure out than it probably should have. In this puzzle, longer theme entries are shortened by having a brand of tea contained in the answer reading down instead of across. So, HOTEL CHAIN reads HOTELCN across, because CHAI is reading down from the C instead.

This sort of visual gag in a crossword is hard to pull off, but Lieb and Quarfoot do so nicely, having five “spills” in the grid. (Cluing each tea reading down as an “Oops” was a nice touch, as was the Boston Tea Party reference in the tagline at the top of the page.)

Puzzle 5: Get the Picture by Paolo Pasco

The regular tournament concluded with puzzle 5, and Pasco ably brought it home with this film-centric puzzle where the theme entries all ended with synonyms for part of a film (SHOT, SCENE, FOOTAGE, TAKE, and CLIP). The theme is quickly uncovered, but the puzzle is by no means a cakewalk, as solid, creative fill makes for a more challenging solve than you expect.

There’s very little crosswordese — the grid instead focused on unusual entries in a well-constructed grid. (Heck, if Pasco had included J and X, this puzzle would have been a pangram as well!)

Interesting grid entries included SATYRS, CYBER, KAPOW, ME DAY, and GUIDE DOG, and my favorite clue was “Write this answer as EER, say” for ERR. 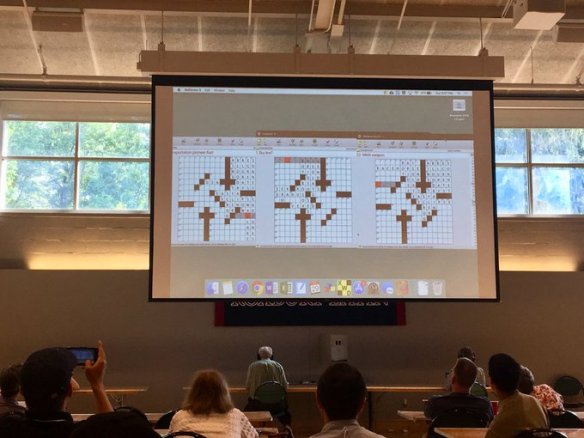 After two years of championship puzzles being shepherded by the ambitious grids of David Quarfoot, Finn Vigeland steps up to the plate with a very intimidating themeless grid loaded with lots of long entries. With 3 nine-letter words in each corner and 3 thirteen-letter entries stacked in the middle of the grid, this one would probably give any solver pause at the outset, let alone those solving on stage in front of an audience.

Those long entries were bolstered by a lot of terrific crossings that made use of the open grid, making for a mostly great solving experience, save one or two specious phrases (AREN’T I?, ick).

But the impressive ones far outweigh the occasional clunkers, and Vigeland’s first championship themeless for BosWords will most likely not be his last.

Interesting grid entries included PR FARM, FUTURAMA, I CAN’T EVEN, and ARMREST, and my favorite clue was “One of a breakfast trio” for SNAP.

Bonus puzzle: Do the Math by John Lieb

Although this wasn’t an official tournament puzzle, I have to mention it because this bonus grid was my favorite in the entire set. Treating common hyphenated phrases with numbers as if they were equations, the theme entries in this puzzle required a little outside-the-box thinking to come up with the correction solutions.

For instance, “Combo from Rocky Balboa” would normally be “ONE-TWO PUNCH,” but since we’re thinking mathematically, ONE minus TWO is NEGATIVE ONE, so our themed answer is actually NEGATIVE ONE PUNCH.

The revealer DIFFERENCE MAKERS was just the icing on the cake for a puzzle that took something in plain sight and turned it on its head in a clever way. It was the perfect conclusion to a day of enjoyable puzzling.

Interesting grid entries included ELIXIR, RELAXED FIT, YIKES, and K’NEX, and my favorite clues were “Pricey place for a fan” for SKYBOX and “Improvises musically” for VAMPS.

Overall, I was mostly impressed by the array of puzzles assembled for this year’s tournament. There were tricky themes, visual themes, and math themes, all of which made great use of both the cluing and the grids themselves. Yes, one or two puzzles didn’t connect with me as strongly as the others, but the entire gauntlet of puzzles were challenging and creative in their design without being off-putting or getting too esoteric.

BosWords is probably the tournament that is friendliest to new solvers in terms of puzzle difficulty — not nearly as challenging as those at Lollapuzzoola or The Indie 500, but increasingly just as experimental and inventive — while still remaining engaging.

1 thought on “Delving into the BosWords 2019 Crosswords!”