The holiday season is one of the few times in a given calendar year I play games with most of my family members.

The necessity of gathering for multiple events — it takes two or three days to see everyone around Christmastime, based on geography, family obligations, and such — creates opportunities for group gameplay that simply don’t exist other times of the year.

This got me thinking about house rules.

Every family has house rules for games and activities. Maybe it’s where you stand and throw in a round of cornhole, or what’s fair in a game of Horse, or how many do-overs younger kids get during a trivia game. It could be whether you call all shots during a pool game or only the 8-ball shot. That sort of thing.

I virtually guarantee that every household has some house rules for Monopoly, whether it’s doubling your $200 if you land directly on Go or collecting previously-paid fees when you land on Free Parking.

As it turns out, a lot of us have been playing Uno with house rules as well. 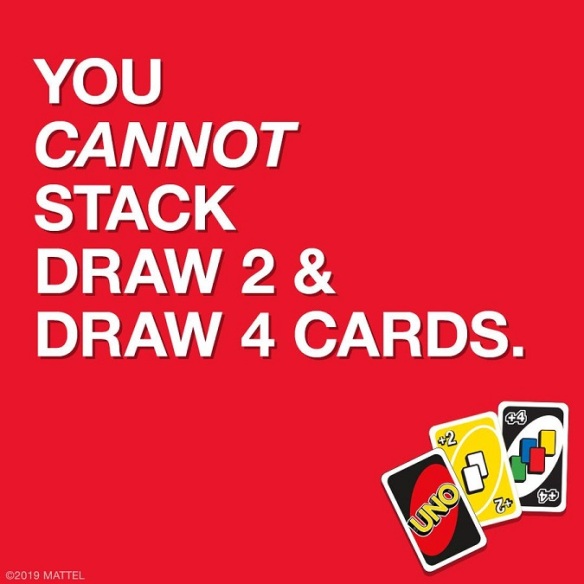 This was also a total surprise to me. Growing up, I learned that you can stack Draw 2 cards or Draw 4 cards. Apparently, in some households, you can add to Draw 2 with a Draw 4 or a Draw 4 with a Draw 2, making a Draw 6 for an opponent.

In any case, that sort of stacking has never been allowed in the official rules.

Gasp! That means many heartbreaking Uno moments from my childhood could have been avoided!

So, I decided to dig a little further. Were there other rules I didn’t know about?

As it turns out… there were.

In this Facebook post from January of 2018, an astonished Uno player discovered this little gem in the Uno rule book:

Did y’all know that you can only play the Draw 4 Wild card IF you have NO other cards of the same color that can be played??! AND if you suspect that someone has illegally played this card, they have to show you their hand. AND if they in fact played the card illegally they must draw 4, but if not, the person who challenged the play must DRAW 6?

How am I only learning about these rules now?! I, for one, never knew that you could force someone to show you their hand if they broke the honor system Go Fish-style.

Have these revelations changed the way you play Uno, fellow puzzlers? Or am I in the minority as part of a group that thought we knew the rules, but were very much mistaken?

Let us know in the comments section below! We’d love to hear from you.

1 thought on “Have You Been Playing Uno Wrong All Along?”