Sometimes we discuss puzzly world records here on the blog, and today, I’d like to share the story of a once-in-a-lifetime puzzly accomplishment.

On Tuesday, October 3rd, 2017, two women set a record by walking out of Sidequests Adventures, an escape room company in Edmonton, Alberta, Canada, in only three minutes.

How did they do so? With police assistance.

Allow me to elaborate.

Our story begins the night before, as police search for two inmates who jumped the east fence of the Edmonton Institution for Women.

The next day, around 8:30 PM, two women walk into Sidequests Adventures, claiming to be from out of town. They start asking about the escape rooms, apparently never having heard of the puzzly business. One of the employees, Rebecca, takes them down the hall to view one of the rooms.

Around the same time, police arrive in the area, tipped off by a citizen who recognized the women.

As Rebecca gives the inquisitive women the tour, a police officer walks into Sidequests Adventures and asks another employee, Jonathan, if two women without an appointment had come in.

At this point, only about 30 seconds have elapsed, and that’s when Rebecca looks up and notices the numerous police officers inside the business. She quickly realizes they’re not there to inquire about the escape rooms.

Either that or they think “escape rooms” are something quite different. 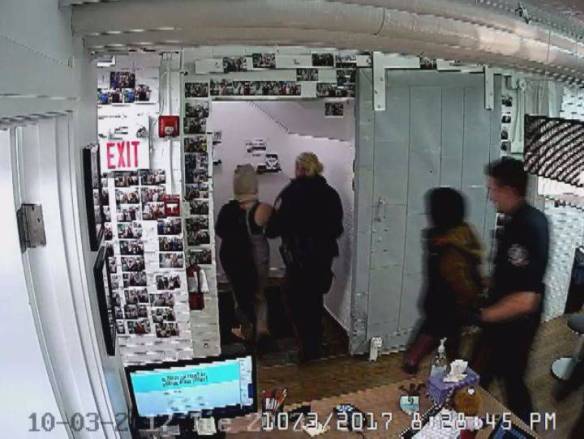 Kelsie and Samantha are quickly handcuffed and taken away.

By the time they’re led out the door, only three minutes have elapsed.

Oh, by the way, what was the motto on the wall of Sidequests Adventures?

So, yes, two escaped felons managed to flee to an escape room and be recaptured there. The gods are puzzly and have a wicked sense of humor.

Thanks for indulging me, PuzzleNationers. I scrapped my original idea for today’s post and went with this one late last night.

At a time when we’re all self-isolating and keeping our distance from one another for the greater good, it felt weirdly appropriate to share a funny, puzzly story about an escape gone wrong that ends in such a curiously perfect way.