The latest edition of the video game franchise Animal Crossing — New Horizons — has been out for a few months now. But recently, they ventured into the world of puzzles as a special promotion.

Thankfully, friend of the blog Jennifer Cunningham — puzzler, artist, musicologist, and former Tabletop Tournament Champion — has returned to the blog with the lowdown on the recent May Day event.

So, without further ado, let’s turn things over to Jen for her piece on Animal Crossing: New Horizons.

Possibly one of the most anticipated video game releases of the year, Animal Crossing: New Horizons arrived at just the right time, hitting Nintendo Switch consoles at the end of March.

The latest installment in the Animal Crossing series finds its players arriving at a beautiful island paradise. There are multiple goals in the game including expanding your home, gaining wealth, collecting insects and fish to donate to the local museum (or to sell for profit), and of course improving your island’s appeal so that popular singer/songwriter K.K. Slider will play a concert for you and the other residents.

Players across the world have gone wild for this game, making it their entertainment of choice while stuck at home at this uneasy time. The social aspect of the game, which allows players to virtually invite their friends to their islands, share gifts and resources, and even to chat, has helped many feel less isolated.

And the makers of Animal Crossing are doing their part to keep the game interesting and engaging for players who have likely been obsessively playing since the release date. As months change, so do your island’s insects and fish, and special events ensure players keep coming back. An Easter-themed event called Bunny Day saw players collecting eggs to build themed objects, and more recently an environmentally centered event called Nature Day encouraged activities related to planting trees and flowers.

May Day on May 1st was part of the Nature Day celebration. Starting on this day, everyone’s favorite raccoon/tanuki mogul Tom Nook gave players a special ticket for a May Day Tour on a special getaway island via Dodo Airlines. Unlike other island excursions that players may take, this particular tour package had an unusual surprise. Players were transported to an island with a puzzly secret: a maze!

Normally Animal Crossing doesn’t involve much in the way of problem solving — it’s a pretty straightforward collect-and-build-style game — so to challenge players with a puzzle was a surprise.

The entire May Day Tour island is composed of a hedge maze, blocked off in spots by boulders, trees, and shrubs. Using a simple shovel supplied at the maze entrance, players must collect resources such as fruit, wood, and iron ore to build more tools and make their way through the maze. 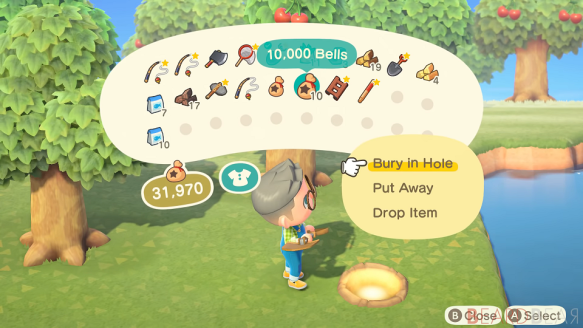 In addition, players could collect “Bell vouchers” which can be traded in for Bells (the game’s currency). At the end of the maze awaited the main prize as supplied by a mysterious returning character popular to fans of the game’s previous generations. (I admit as a new fan, this wasn’t a big draw for me, but for die-hard fans, this was a very big deal.)

The maze was intuitive, and it didn’t take long for me to figure out how to navigate it, although it does involve a lot of backtracking to meet the necessary steps in the correct order.

That said, the maze did offer some challenges. I completed my first attempt fairly quickly, but failed to maintain enough fruit in my stores to remove three boulders and access a group of bell vouchers. (For a bit of context, consuming fruit boosts players’ strength, allowing them to dig up whole trees or break boulders).

Thankfully the maze offered a reset option. It took me about three attempts to finally perform every necessary action in the correct order to collect all of the maze’s prizes. 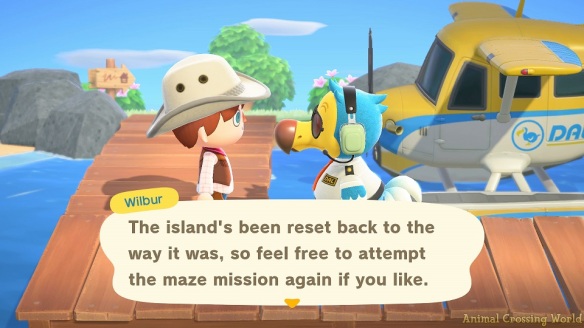 Overall, while not the most challenging of puzzles, it was refreshing to do some problem solving in a game that can admittedly get a little repetitive. There was a hint within the game’s dialog that there may be more islands of this sort, and I do hope that is true. Likely these will be included in future events to keep players coming back for more.

If you haven’t jumped on the Animal Crossing bandwagon yet and want to try your luck at the maze before it’s too late, the May Day event runs through May 7.

Thank you Jen for that marvelous report!

Will you be participating in the May Day Animal Crossing event, fellow puzzlers and PuzzleNationers? Let us know in the comments section below. We’d love to hear from you!