The farm is no longer the quiet, idyllic escape you pictured when learning the sounds barnyard animals make. Instead, it has fallen to factional fury and un-cooped combat between various groups of chickens vying for victory. Such is the setting for ThinkFun‘s latest brain-training game, the colorful and crafty tile game Chicken War. 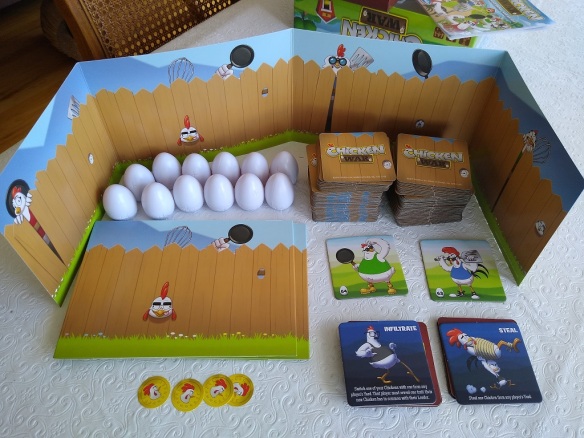 As you can see, Chicken War’s hybrid style of play combines the player observation of a game like Throw Throw Burrito or Scrimish with the deductive reasoning of a game like Clue.

Each player is trying to recruit chickens for their army, and must do so in full view of the other players. This means that you have to strategize not only your recruitment process, but how to do so without revealing too much to your opponents. Plus you have to do all that while keeping an eye on your opponents’ efforts to recruit!

First, you select your leader from the ten starting chickens in your yard. Optimally, you’ll pick a leader where many of the other starting chickens already share two traits, which gives you a leg up in building your army. 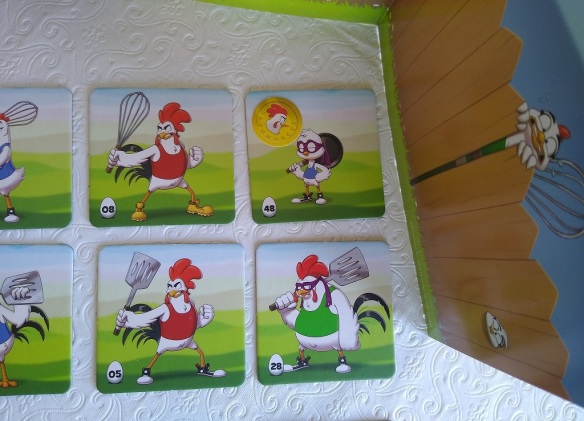 You’ll hide your leader token under that particular chicken to mark it, using your screen to do so away from the prying eyes of other players. 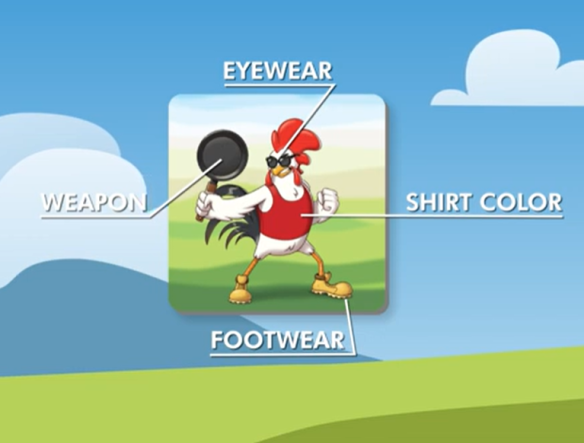 The four possible traits, as shown above, are weapon, shirt color, eyewear, and footwear. Each trait has three variations. For instance, shirt color can be blue, red, or green. Eyewear can be sunglasses, mask, or none.

(Keep those four traits in mind. Body type, pose, and style of tail are all irrelevant, but can be distracting.)

How do you recruit chickens? By drawing from the discard pile. You either keep the new chicken and discard one of the chickens from your yard, or you immediately discard the new chicken.

The only other ways to recruit chickens are to use the two special tiles: steal and infiltrate.

Steal lets you take a chicken from another player’s yard and discard one of your unwanted chickens into the discard pile. This not only gives you a new chicken, but leaves your opponent one chicken short. This can be a strategic advantage, because any player with fewer than 10 chickens can’t lob an egg and cannot win the game, even if their remaining chickens all match the leader.

Infiltrate allows you to swap one of your chickens with one of your opponents’ chickens. That player must then tell you one trait your chicken (the one placed in their yard) has with their leader. If there are no traits in common with the leader, they must tell you that instead. And if you accidentally trade for their leader, they must pick a new leader and start over. So in any case, you gain a new chicken and important knowledge about your opponent’s game.

If multiple players gang up on a single player, the Infiltrate card can prove very dangerous, eventually outing the player’s leader and making them easy pickings for an egg and elimination from the game. (This tactic is more likely to catch new players, as more experienced players would endeavor to repeat the same revealed trait over and over, whenever possible.)

So each turn, you must either draw a chicken from the discard pile or lob an egg.

Lobbing one of your three eggs means you place your egg on a chicken in another player’s yard that you suspect is their leader. If you’re correct, that player is out.

But if you’re wrong, you lose an egg and have to discard two chickens from your yard, leaving yourself two chickens short of victory. (Also, as we stated before, you can’t win the game or lob an egg with fewer than 10 chickens in your yard.) 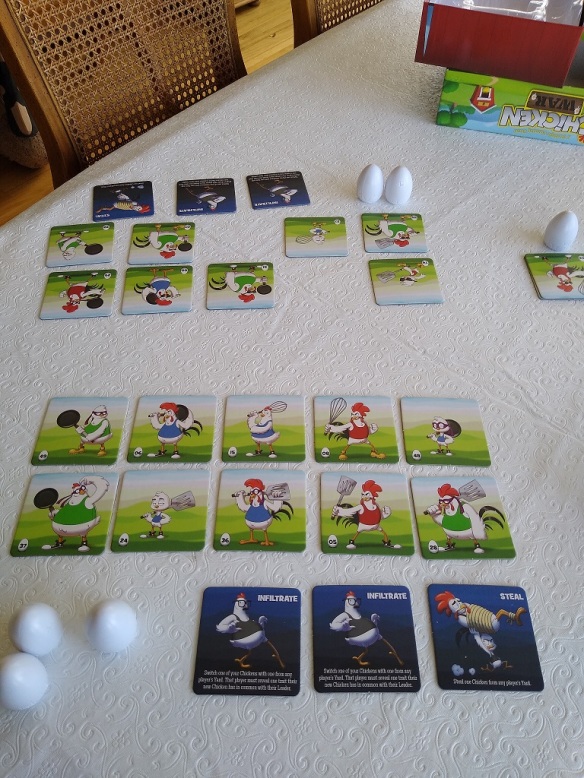 The two methods of winning can often lead to two different styles of gameplay. Either a player focuses on their recruitment, hoping to be the first to complete their army, or they focus on eliminating another player by sussing out who their leader chicken is.

This adds a lot of variety to the game, particularly when it comes to repeat playthroughs. Figuring out your opponents’ tactics can inform your own, and yet, you don’t want to tip your hand.

Once I had one or two playthroughs behind me, I really started getting invested in the gameplay and trying to get into my opponents’ heads. (Also, there’s something delightfully demented about these chickens all being armed with “weapons” we would use to make breakfast from their eggs. That’s a nice touch.)

Although it makes for a tense, enjoyable one-on-one game, the full potential of Chicken War comes alive with all four players involved. It forces to split your attention, retain a lot of information, and constantly adapt your strategy to an ever-shifting landscape.

As you can see, there’s a surprising amount of thought, strategy, and complexity behind this so-called guessing game, and it makes Chicken War a terrific gateway game to other board games in the same style, but with more complex rulesets or player choices. War is hell, but Chicken War is healthy brain-fueled fun.

[Chicken War is available from ThinkFun and other retail outlets.]