One of the flagship games under the Winning Moves UK umbrella is Top Trumps, a one-on-one game similar to War where you try to capture all of your opponent’s cards with your own. Superior value wins. But unlike War, Top Trumps cards have multiple attributes based on the theme of the set.

For instance, The Mummy — a card from Ancient Egypt Top Trumps — has an age of 3,330 but a beauty of 2. You’re pitting the attribute scores on your card against those on your opponent’s card. So if you want to capture the card in your opponent’s hand, you’ll probably want to ask their age and not their beauty ranking.

That’s all well and good — especially if you’d happily pit your top-notch dinosaur know-how against that of your friends and loved ones — but what if you’d like more variety in your trivia topics?

Well, Top Trumps has got you covered there as well with their latest spin on the brand: Top Trumps Pub Quiz.

Each team opens their drawer on the carrying case and removes five cards, each with a different topic. The teams then go back and forth with trivia questions, one at a time.

If both teams answer Question 1 correctly, they move on to Question 2, and so on until the card is complete or your results differ.

If both teams answer Question 1 incorrectly, they move on to Question 2, and so on until the card is complete or your results differ.

If one team answers correctly and the other doesn’t, then both cards are captured by the team with the correct answer. That’s one pair. You need three pairs to win.

And if both teams manage to make it through a card without one side or another capturing the pair, those cards sit on the table as an unclaimed pair, and will be captured by the team with the first correct. So it’s possible that a single correct answer could wildly swing the progression of the game from one team to the other, or even determine the victor entirely! 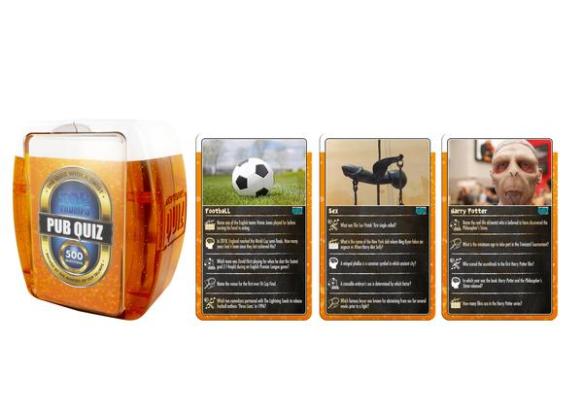 There’s also a memory-testing feature built into the game, if you so choose. You simply gather up the ten cards from this particular round, shuffle them, redistribute them, and quiz each other again. How well do you retain information you just learned? You’ll find out with the Memory Game Twist!

The trivia obviously ranges in difficulty depending on the subject, but for the most part, it’s a fair middle-of-the-road test of general knowledge across a vast array of categories. But a key thing to remember is… this game was developed in the UK. So American trivia hounds might be surprised by specific references to English geography, pop culture, and so on.

For instance, the football category isn’t American football, it’s soccer. (A serious weakness in my trivia game, as it turns out.) In another example, the first card our team drew referred to Battersea Power Station, which most of the opposing team had never heard of.

It might throw you off slightly, but it’s also an interesting challenge. How much do you really know about the world outside your bubble? And it’s the luck of the draw, after all. Someone on the other team might know European football inside and out, but struggle with a Star Wars question. You never know.

The cards are in full color, offering some eye-catching visuals to accompany the quintet of trivia questions on each card. And while we’re discussing aesthetics, I can’t talk about the game without mentioning the carrying case.

This container is one of my favorite game designs I’ve encountered recently. The carrying case feature two separate drawers to keep trivia cards separate. You can use this to maintain your distance from your opponents and prevent any accidental answer peeking, or leave the drawers open to keep score, or simply use them to organize your cards and prevent you from reusing trivia cards too soon.

But the visual aspect is what really sells it. With its amber casing with sparkly flecks that catch the light, plus the solid white top, the case resembles a freshly-poured glass of beer, the perfect accompaniment to a pub quiz atmosphere. The drawers snap open and tilt outward, as if you’re about to toss back some knowledge. It’s simple, yet utterly perfect, a clever twist on their standard Top Trumps Quiz with a Twist storage case design model.

All in all, Top Trumps Pub Quiz is portable, engaging, and nicely replicates the variety and spontaneity of a pub quiz. It’s quick to play, requires no game board, and will keep you coming back for more. What a treat.

[Top Trumps Pub Quiz is available from Winning Moves UK and certain online sellers, and is part of this year’s Holiday Puzzly Gift Guide, launching next week, so keep your eyes peeled for this game and more terrific puzzly products!]