There are an unbelievable number of chess variants out there.

You can play with narrower boards and fewer pieces (TrimChess), or wider boards and additional pieces (Capablanca Chess). You can play All Queens chess, 3-person chess, or that multi-level chess game from Star Trek. In previous posts, we’ve discussed variations like ChessPlus (with pieces that merge and can move like two different chess pieces) and Tour de Force chess (where pieces can be recovered after being captured, or beheaded by a guillotine).

After years of writing this blog, I felt fairly confident that I’d seen pretty much everything that could be done with chess.

And then Looney Labs introduced me to Martian Chess, and showed me that the iconic piece-capturing strategy game has plenty of gas still in the tank, especially where creative game designers are concerned.

Martian Chess only employs three types of game pieces — a large pyramid, a medium pyramid, and a small pyramid, based on Andrew Looney’s infinitely adaptable Looney Pyramids — and each piece moves a certain way. 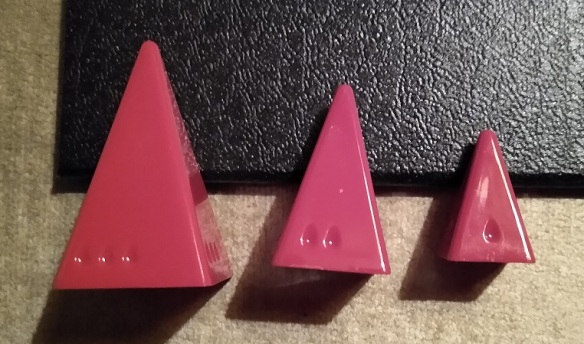 You maneuver your pieces in order to capture whichever of your opponent’s pieces you can, and that goes for any piece. Martian Chess does away with the concept of checkmate, since there is no king to capture here. No, Martian Chess is all about scoring points (1, 2, or 3, based on which piece you capture) and outmaneuvering your opponent. The player with the most points at the end of the game wins.

Oh, there’s one more important wrinkle here: you can only control pieces in your zone.

Each player in Martian Chess has a 4×4 game board in front of them. You can move pieces from your game board to your opponent’s board, but as soon as you do, that piece becomes theirs to control. 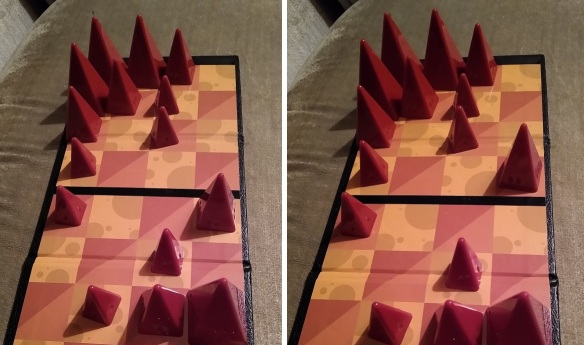 This absolutely changes the way you approach the game. In Earth chess, you’re encouraged to push forward and press your advantage. In Martian Chess, though, you have to be far more strategic, because as soon as your piece crosses the canal into the other player’s zone, they can use it however they like.

I confess, my brain melted during my first few games of Martian Chess, because I had to deprogram myself from years of previous chess playing. It completely changes how you look at attack and defense. Sure, if you’re going to cross the canal and lose control of a piece, you probably want to do so while capturing one of theirs for points. But sometimes, that sacrifice can serve to block one of their upcoming attacks, or provide a screen for one of your own.

[We’ve each captured one pyramid, but mine is valued 1
and hers is valued 2, so she’s ahead on points.]

The game ends when one player has no more pieces in their zone. This adds another fresh element to the game, because you’re managing both your resources in terms of game pieces in your zone and the number of points you’ve scored.

If you’re ahead in points, but low in game pieces, it might be strategically worth it to push those remaining few pieces over the canal and empty your board, cashing in your lead early.

Other times, you’ll want to play it slower, looking for opportunities to zoom ahead in points and then take advantage.

One of the things I like about Martian Chess is that it feels like you’ve immediately been pushed into the tense second-half of a chess game. In Earth chess, the early rounds can be a little drab as players start pushing pieces into position for bigger moves down the line, but all the action comes later. In Martian Chess, you’re immediately in the deep end. I really dig that.

Easy to learn but hard to master, Martian Chess is a sharp reimagination of a game we all know, but one that feels intriguingly unfamiliar each time you break out the box and give it another go. It really does feel like chess from another world.

[Martian Chess is available now from Looney Labs as part of their Pyramid Quartet, and will be part of this year’s Holiday Puzzly Gift Guide, launching next Tuesday, so keep your eyes peeled for all sorts of puzzle and game fun!]