Many board games are meticulously designed, every aspect playtested dozens if not hundreds of times to ensure the optimal play experience no matter what choices the players make, how the dice roll, or how the various game mechanics interact.

We call these modifications “house rules,” and virtually every household has them, for one game or another.

Did you grow up with the rule that all fees and fines collected go in the center of the board, and are then collected by the first player to land on Free Parking? I certainly did. (And interestingly, studies have shown that this house rule lengthens an already long game experience, rather than shortening it or evening the playing field, potentially making the game worse.)

Maybe you get a bonus if you land directly on Go. Maybe your assets are frozen when you’re in jail and you can’t collect any rent money you earn. Maybe you allow the utilities to collect 5% of any player-to-player transactions over $200. But certainly, there’s at least one variant rule that your family considers standard.

(Monopoly once held a contest where players submitted house rules and five of them were added to a special House Rules edition of the game.)

The best house rule for Monopoly I’ve encountered is called “the mugging rule.” If someone lands on a space that is currently occupied, that player can choose to mug the player already there. They take turns rolling the dice, and if the mugger rolls higher, they steal $100. If the person being mugged rolls higher, the mugger goes to jail.

Another game rife with house rules is Uno.

It turns out, one of the most famous rules in Uno is a house rule. An incredibly common one, to be sure, but not standard at all.

And there are a host of other house rules in Uno. Playing a Zero card rotates everyone’s hands in the direction of play. So if the game is going left, you hand your cards to the player on your left and receive the hand from the player on your right.

Playing a 7 allows you to swap hands with the player of your choice.

Instead of drawing a single card if you can’t play, some households require you to keep drawing until you can play a card. Which would cause your hand to balloon quickly!

The crew at No Rolls Barred tried out a classic rules Uno game versus an all-house rule game, and a single round of the house rules game lasted nearly an hour! 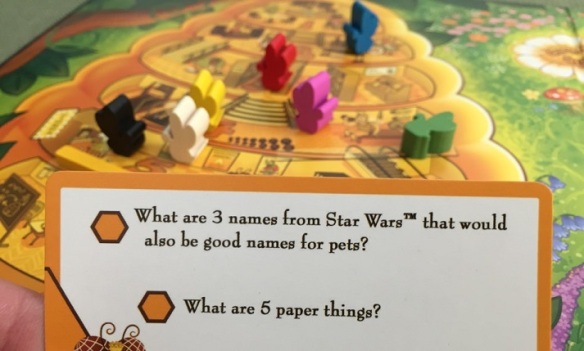 [Image courtesy of The Board Game Family.]

Naturally, our in-office game group has all sorts of house rules we’ve added to games we play frequently.

My favorite is probably the bonus rule we added to Hive Mind.

Hive Mind is kind of like Scattergories, where you have a given topic and you’re trying to write an answer down for it. But instead of being unique, your goal is to match as many other players as possible.

Unfortunately, sometimes that doesn’t work out, and if you have a knack for not matching players — like I do — then our house rule comes in handy.

Everyone votes on their favorite answer that didn’t match anyone, and that person gets bonus points. It’s rarely enough to tip the scales entirely, but it often ensures that players last longer, and in Hive Mind, that’s always a plus.

What are some of your favorite board game house rules, fellow puzzlers and PuzzleNationers?

Do you let the person who can make the longest word go first in Scrabble, ensuring lots of places to add letters? Do you try to chase the killer down in Clue after they’re revealed?

Let us know in the comments section below! We’d love to hear from you.