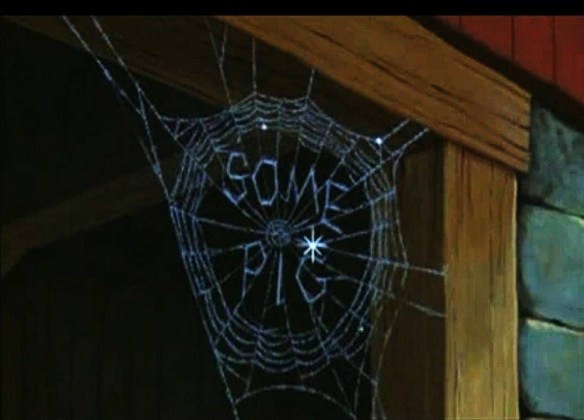 But PuzzleNation Blog has a fine long-standing tradition of celebrating the puzzly accomplishments of non-human puzzlers. In the past, we’ve discussed the puzzle skills evidenced by cats, dogs, crows, cockatoos, octopuses, and bees.

And it’s possible that, soon, we might be adding another species to that marvelous list of puzzle-cracking creatures.

According to a paper published on February 11th in the journal Frontiers in Psychology, pigs can learn to be gamers.

No, we haven’t seen them follow multiple steps like octopuses or cockatoos, but there is puzzly potential here, because they’ve proven they can accomplish abstract tasks and deal with unenviable circumstances. 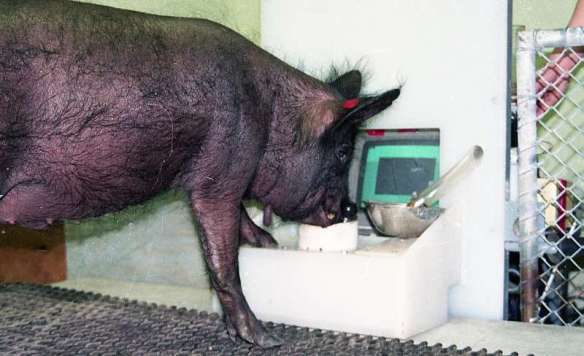 The initial task was for the four pigs — Omelet and Hamlet (Yorkshire pigs) and Ebony and Ivory (Panepinto micro pigs) — to manipulate a joystick so that they would move the cursor on the screen into a particular area.

Sure, it sounds simple, but if you’re an animal that doesn’t look at screens at all or is unfamiliar with the concept that one action here can cause one effect there, this is monumental.

According to The Guardian, the Purdue study focused on “the last 50 rounds of the video game played by each pig on each of the three levels, with one, two and three walls. The round was successful if the pig moved the cursor to the bright blue target with the first cursor movement.”

Their difficulties were described in detail:

It was an uphill battle for the swine. The joysticks were outfitted for trials with primates, so the hoofed pigs had to use their snouts and mouths to get the job done. All four pigs were found to be farsighted, so the screens had to be placed at an optimal distance for the pigs to see the targets. There were additional limitations on the Yorkshire pigs. Bred to grow fast, the heavier pigs couldn’t stay on their feet for too long.

Still, the pigs showed what is known as “self-agency,” the realization that one’s actions make a difference. The pigs recognized that by manipulating the joystick, they moved the cursor. That connection — similar to a cockatoo pulling a lever and opening a door — is the sort of step-by-step cognition that leads to puzzle solving.

The pigs were able to adapt to the joysticks and complete their simple, yet abstract goal.

“What they were able to do is perform well above chance at hitting these targets,” said Candace Croney, director of Purdue University’s Center for Animal Welfare Science and lead author of the paper. “And well enough above chance that it’s very clear they had some conceptual understanding of what they were being asked to do.”

I think the next step should be designing an Angry Birds analog for them where they throw something at the birds and their structures, and see how they do.

We’ll be keeping our eyes open for any other pig-related puzzling. It’s entirely possible we’ll be adding them to the puzzle-solving menagerie sooner rather than later.

And now, despite the cliche, there is truly only one way I can end this post. Say it with me now…