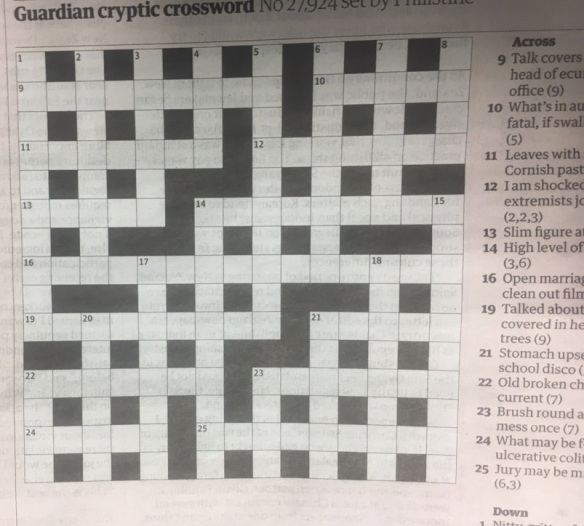 The hunt is always on for the next big puzzle idea.

Sometimes, it’s an old idea that gets repackaged and catches fire. That’s what happened with Sudoku, a puzzle that had been around since the late ’70s, but only rose to prominence decades later.

Other times, it’s a combination of different puzzle types that yields something special. Our friends at Penny Dell Puzzles, for instance, have a popular puzzle called Anagram Magic Square, which combines crossword-style cluing, anagrams, and the mathematical element of a magic square to create an engaging puzzle experience you can solve from several angles.

Whether a puzzle is destined for superstardom or not depends on a lot of factors: difficulty, the type of solving it involves, how intuitive the solving is (i.e. needing a lengthy explanation vs. getting the gist of the puzzle from a glance), visual aesthetics, and more.

As a puzzler, it’s always exciting to try out a new puzzle. Wholly original ideas are rare, to be sure, but even a single twist on an old classic can be enjoyable if executed well.

Today, we’re taking a look at a puzzle that combines Sudoku with cryptic crosswords (aka British-style crosswords). It’s called Cluedoku, and it was created by cryptic constructor Charlie Methven, better known in solving circles as Chameleon, a contributor to British puzzle outlets like The Guardian. 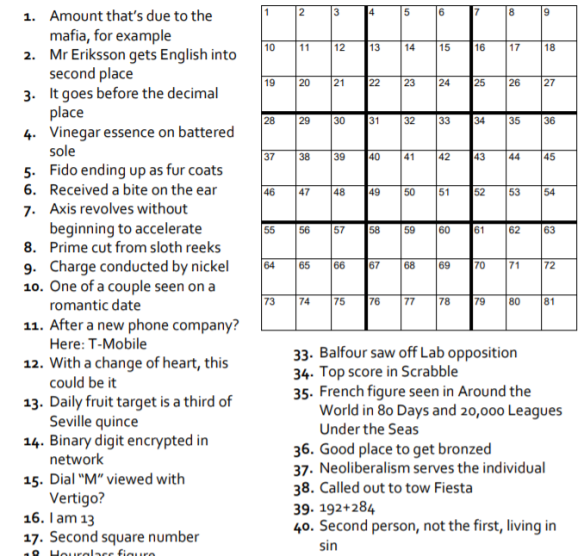 [Just a sample of the puzzle. Check out the entire puzzle here.]

Like Sudoku, Cluedoku involves placing the digits 1 through 9 into each row, column, and 3×3 square in the grid. But unlike Sudoku, there are no set letters.

Instead, you have 81 clues, one for every cell in the grid, utilizing cryptic-style cluing to hint toward which of the nine numbers goes in a given cell.

Once you’ve unraveled a clue and placed a number in the grid, standard Sudoku rules apply: that number will only appear once in a row, column, or 3×3 square.

But that’s easier said than done. These clues run the gamut of slyly clever to almost baffling. Even when you consider that there are only nine possible answers for each clue, it’s still a challenge. (Plus, not all of the clues adhere to the standard cryptic cluing mechanic of having both a definition AND a wordplay clue included.)

Now, we’re going to be discussing specific clues and answers from this puzzle, so this is your spoiler warning.

Last chance to solve without spoilers!

In clue 8 — Prime cut from sloth reeks — the answer hides in plain sight, as a prime number (three) reads out in sloTH REEks (and can be cut out of it).

But other clues would be familiar to crossword solvers in America.

Clue 29 — Number of Romans in the New Testament? — is simple wordplay for 6, since Romans is the SIXth book. (Similarly, clue 62 — Number of lines taken by bar staff — is a reference to the FIVE lines that make up a staff in sheet music.)

Clue 48 — Man’s arms’ legs’ digit — feels like a clue you’d see at the Indie 500 or Lollapuzzoola, because it’s initially baffling, but then reveals itself as merely clever and challenging. You see, there are THREE legs on the coat of arms for the Isle of Man. But that’s concealed by the wordplay involving three different words that don’t mean what you’d think.

This mix of American and British-style clues made for a fun solve that mixed and mingled two worlds of cluing nicely.

I think my favorite clue was Clue 39 — 192+284 — because it was built like one of those magazine word puzzles, the ones where “rockcaughthardplace” means “caught between a rock and a hard place.” In this case, you have “2+2” literally in 1984. And for anyone familiar with George Orwell’s famous novel, 2+2 in 1984 equalled FIVE.

Although obviously Cluedoku isn’t really sustainable as a recurring puzzle — you’d burn out your anagrams and homophones pretty quickly, as Chameleon himself stated in an interview — it is an impressive marriage of two different puzzles that rarely interact otherwise.

But he did raise the possibility of another variation in the future:

If I did another Chameleon cluedoku, I think I’d use the seven colours of the rainbow plus black and white, as solvers could then colour in each square as they solved. How’s “Cry over Norwich’s core Canary”?

That sounds like a fun follow-up to an interesting puzzle.

What did you think of Cluedoku, fellow puzzlers and PuzzleNationers? Let us know in the comments below! We’d love to hear from you.

And today, I’m posting the results of our #PennyDellPuzzleSciFi hashtag game!

For over a year now, we’ve been collaborating on puzzle-themed hashtag games with our pals at Penny Dell Puzzles, and this month’s hook was #PennyDellPuzzleSciFi, mashing up Penny Dell puzzles and anything and everything having to do with cartoons, animated film and television shows, characters, catchphrases, famous lines…anything!

Examples include The Day The Earth Stood Syll-acrostic, Captain James T. Kirkuro, Keep ON Asi-moving, or Mystery Person of Interest.

“Beam me Ups and Downs, Scotty!”

“The Double Trouble with Tribbles”

“Make the Connection so.”

Simon Says: In space, no one can hear you scream.

A Wrinkle in Rhyme Time

Piggyback to the Future

“May the Solicross be with you” [Glenn’s note: I know this sounds like Star Wars, but it feels more Spaceballs to me.]

“Now that’s the worst disguise ever. That guy’s gotta be an Analog.”

Penny’s next puzzle…The Ultimate Question of Life, the Universe, and Everything (answer on page…42)

So It GOes FISH

Heads & Tails from the Darkside

3rd Rock from the Sunrays

Two at a Time Lords

Close Encounters of the Three of a Kind

“Curse your Sudoku but inevitable betrayal!”

“You can’t Give and Take the sky from me.”

Godzilla vs. Guess Who

E.T. the Exchange Board

War of the Word Quest

And the PuzzleNation readership got involved as well! @HereLetty delivered the terrific Galaxy Quotefalls and War of the Wizard Words!

Have you come up with any Penny Dell Puzzle SciFi entries of your own? Let us know! We’d love to see them!

And today, I’m posting the results of our #PennyDellPuzzleBooks hashtag game!

For the last few months, we’re been collaborating on puzzle-themed hashtag games with our pals at Penny/Dell Puzzles, and this month’s hook was Penny/Dell Broadway Puzzles!

Examples might be The Lord of the Diamond Rings or The Da Vinci Codeword or Alphabet Soup for the Soul.

So, without further ado, check out what the puzzlers at PuzzleNation and Penny/Dell Puzzles came up with!

The Grapes of Word Math

Harry Potter and the Halftime Prince

The Lion, the Witch, and the Word Seek

The Wizard Words of Oz

The “Mystery Person” of Edward Drood

A Tale of Two-Step Cities

The Three of a Kind Musketeers

Little Puzzler on the Prairie

First and Last of the Mohicans

The Countdown of Monte Cristo

Take It from There to Eternity

A Wrinkle in Time Machine

The Perks of Being a WallFlower Power

The Hotel on the Poet’s Corner of Bitter and Sweet

Only The Shadow Knows

From Alphabet Soup to Nuts

Match Up Made in Heaven

A Hive for a Honeycomb

We also received a terrific one from @_Screenhog, Cross Sums of All Fears!

Have you come up with any Penny/Dell Puzzle Books of your own? Let us know! We’d love to see them!