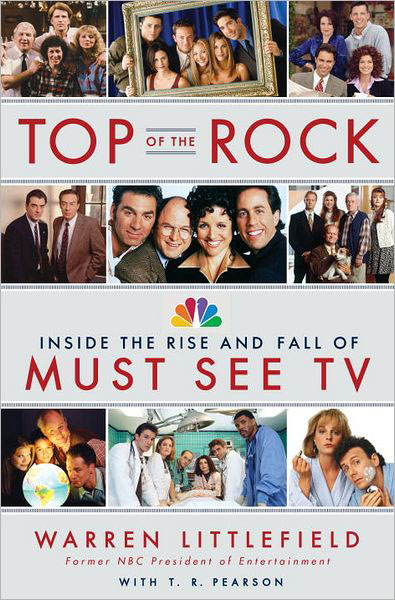 By the late 2000s and early 2010s, NBC’s Must See TV Thursday lineup was a thing of the past, but they were still putting out quality comedy content. My Name Is Earl, The Office, Community, Scrubs, Parks and Recreation, and 30 Rock all had loyal followings.

And you’d be surprised how much puzzle and game content ended up on those shows.

The Office featured in-house Olympics and betting games, as well as a Da Vinci Code-esque prank. Community had two Dungeons & Dragons-inspired episodes (which I should really cover at some point).

But those last two shows — Parks and Recreation and 30 Rock — both featured made-up games that either spoofed or were inspired by modern board games.

(Yes, we’ve previously covered the Valentine’s Day scavenger hunt from Parks and Rec, but there were two other scavenger hunt moments, as well as the many game references made by the character Ben Wyatt.)

Parks and Recreation had The Cones of Dunshire, and 30 Rock had Colonizers of Malaar. Both of these games are much more elaborate takes on Settlers of Catan, a board game about resource management that is considered one of the top titles in modern board games.

In one episode of 30 Rock, executive Jack Donaghy is struggling with his position, given that NBC is under new ownership with Kabletown, and he finds refuge in a game of Colonizers of Malaar with the writers for comedy show TGS.

Jack believes his business acumen will make the game an easy victory, only to find the play experience strangely similar to his current problems at work. He flees the game for some fresh air.

Later, Jack returns to the game, inspired. He makes a seemingly ill-advised move — playing a fire card in a desert wasteland — that turns the game on its head. The fire turns all the sand into glass, a much-needed resource, and suddenly he’s back in control.

His success in the game inspires him to do the same with his new employers, and Jack leaves, reinvigorated.

The game itself allowed for a few silly throwaway lines, but Jack’s gaming experience was a clever way to allow him to reach rock bottom and rebound. Like many newcomers to a game, he struggled, found his way, and later triumphed, his day improved by playing the game.

Plenty of board game fans have had similarly joyful experiences.

Colonizers of Malaar, as far as we can tell, is a marketed game in the 30 Rock universe. The Cones of Dunshire from Parks and Recreation, on the other hand, is created by character Ben Wyatt and initially treated as a mistake, a nonsensical result of his boredom and frustrations.

The game becomes a running gag in the show. Ben leaves it as a gift at an accounting firm that he has been hired by (and walked away from) several times.

Later, we find out the game has been produced, and Ben stumbles across it when dealing with a dotcom company. He mentions that he invented it, but is shrugged off. He then proves not only his gaming skill but his authorship of the game when he beats the dotcom bosses in a tense playthrough.

It’s mentioned once that a gaming magazine called Cones of Dunshire “punishingly intricate,” a point that makes Ben proud.

Part of the fun of Cones of Dunshire is that the viewer never really understands what’s going on, so supposedly dramatic moments can be played for laughs. (I also appreciate that the name of the game is basically a fancy way of saying “dunce hat.”)

And, in the sort of cyclical storytelling that could only happen in a nerdly pursuit like board games, the company that made Settlers of Catan — Mayfair Games — produced a giant version of the game as part of a charity event at GenCon. 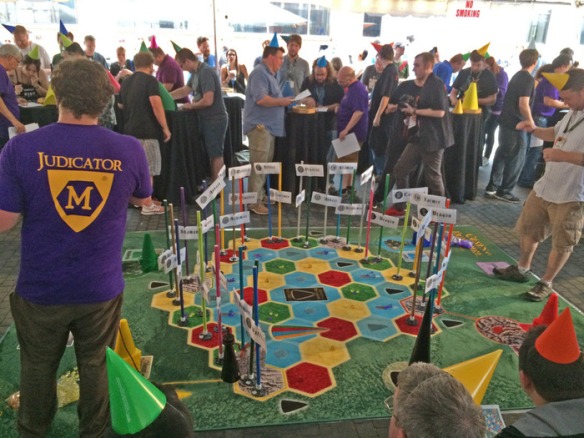 A Kickstarter campaign for a limited run of the game was launched twice, with copies costing $500 due to the insane complexity and number of pieces for the game, but it ultimately failed to reach its goal.

Nonetheless, these two fictional games made an impact on both the characters of the show and the fans as well. What more could you ask for? 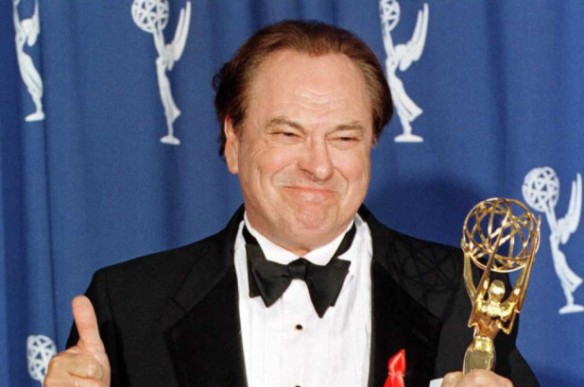 It is always a sad day when the puzzle community loses one of their own, no matter how rare those events are. It’s rarer still to say goodbye to someone whose contributions were made by appearing IN grids, rather than by constructing or cluing them.

Alas, it is one of those rare times, as this week we mourn the loss of crossword icon and Hollywood actor Rip Torn.

Rip was famously aware of his status as a go-to crossword entry. When he was asked if his name had given him anything but grief over the years, he replied, “Well, when I couldn’t get a job, everybody would say, ‘Where do I know you from?’ I said, ‘Crossword puzzles!’ That kept my name alive for years.”

And it’s true. Some names are simply crossword friendly and have shown up regularly over the years, transforming from pop culture reference to fully accepted part of the crosswordese lexicon.

Although we lost Una and Ona and more than one Ida over the years, Rip hung around amongst stalwart compatriots like Ono and Eno and Esai.

[Image courtesy of The Chive.]

An actor known for both his stubbornness and the realism he brought to his performances, Rip essentially had two careers in Hollywood. He was a serious dramatic performer throughout the 1960s, until his reputation for being difficult to work with led to a dry spell in the 1970s. (This reputation was famously cemented when he lost the role later played by Jack Nicholson in Easy Rider.)

He would later enjoy a career renaissance in the mid-1990s and beyond for his considerable comedic talents, leaving behind memorable performances in the Men in Black films, and perhaps most notably, HBO’s meta talk show comedy The Larry Sanders Show. Personally, I always enjoyed Rip as the gruff but entertaining mentor figure, which made his appearances in Dodgeball and 30 Rock a particular delight.

For his talents, his humor, his honesty, and that inimitable arrangement of letters that made him oh-so-crossword-convenient, he will be missed.