I have always suspected that riddles were our first experiments with puzzles and puzzly thinking. Long before crosswords, Sudoku, codebreaking, and magic squares, the potential for wordplay and outside-the-box thinking would have appealed to storytellers, teachers, philosophers, and other deep thinkers.

Who doesn’t enjoy unraveling a riddle, parsing the carefully constructed sentences for every hint and nuance lurking within, and then extracting that tiny purest nugget of a solution from the ether?

Riddles appeal to our love of story and adventure, of heroes with wits as sharp as their swords. Riddles are the domain of gatekeepers and tricksters, monsters and trap rooms from the best Dungeons & Dragons quests.

And so, for centuries upon centuries, even up to the modern day, riddles have been a challenging and intriguing part of the world of puzzling.

We can trace them back to the Greeks, to Ancient Sumeria, to the Bible through Samson, and to mythology through the Sphinx. Riddles abound in literature; we find riddles in Shakespeare, in the works of Joyce, Carroll, and Austen, all the way up to the modern day with The Hobbit and Harry Potter. Every locked room mystery and impossible crime is a riddle to be unraveled.

But this raises a crucial question: what makes a good riddle?

At first glance, it should be confusing or elusive. But after some thought, there should be enough information within the riddle to provide a solution, either through wordplay/punnery OR through looking at the problem from a different perspective.

Let’s look at an example. In this instance, we’ll examine the riddle from Jane Austen’s Emma, which is posed to the title character by a potential suitor:

My first displays the wealth and pomp of kings,
Lords of the earth! their luxury and ease.
Another view of man, my second brings,
Behold him there, the monarch of the seas!

The answer is “courtship.”

The first half of the riddle refers to the playground of royalty — court — and the second half to the domain of her suitor — ship — and when combined they form the suitor’s desire. This riddle is confusingly worded, to be sure, but it makes sense when analyzed and it’s totally reasonable when the clever Emma figures out the answer… and turns down the suitor’s attempt at riddly courtship. 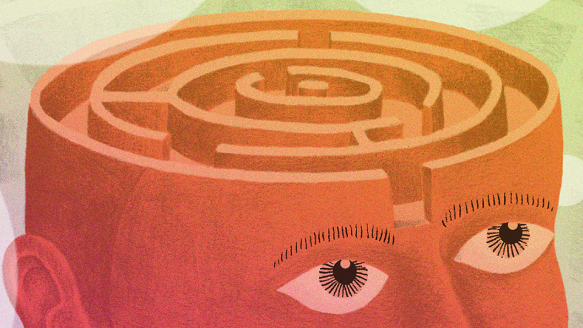 So, what’s an example of a bad riddle? Well, unfortunately, we don’t have to look too hard for an example of one. Let’s examine Samson’s riddle from The Book of Judges in the Old Testament, which he poses to his dinner guests (with a wager attached):

The answer, bafflingly, is “bees making a honeycomb inside the carcass of a lion.”

This is borderline nonsense unless Samson actually told you the story of killing a lion with his bare hands and later returning to the corpse to find bees building a hive inside. So, basically, this riddle not only screws over his dinner guests — who lost a wager to buy fine clothing if they couldn’t solve the rigged riddle — and serves as an excuse to brag about killing a lion. Samson is a jerk.

This is a bad riddle, because it’s designed to be confusing, but does not offer enough information to get to the desired solution. It’s purposely unsolvable, and that sucks. Riddles shouldn’t be arbitrary or nonsensical.

James Joyce pulled this in Ulysses. Lewis Carroll pulled it in Alice’s Adventures in Wonderland. And each of these examples give riddles a bad name. (Even if they do serve a literary purpose, as scholars claim they do in the Joyce and Carroll examples.)

Even if you want the hero to seem (or be) smarter than the reader, the riddle should still make sense. When confronted with five riddles by Gollum in The Hobbit, Bilbo Baggins solves four of them (and answers the fifth through charmingly dumb luck). It doesn’t hurt his character or make the reader feel like they’re being cheated when these riddles are resolved.

That’s another quality of a great riddle. Even if you don’t solve it, when you DO find the answer, it should feel like you were outwitted and you learned something, not that you were involved in a rigged game.

Oh, and speaking of learning, that reminds me of another example of a challenging yet fair riddle, one that comes from Ancient Sumeria (now, modern-day Iraq):

There is a house. One enters it blind and comes out seeing. What is it?

The answer, as you might have puzzled out, is “a school.”

Riddles can be devious or tricky; they can rely on misdirection, our own assumptions and biases, or careful word choice to befuddle the reader. But they should always be learning experiences, like the house you enter blind and leave seeing.

What are some of your favorite riddles, fellow puzzlers? Let us know in the comments section below. We’d love to hear from you! 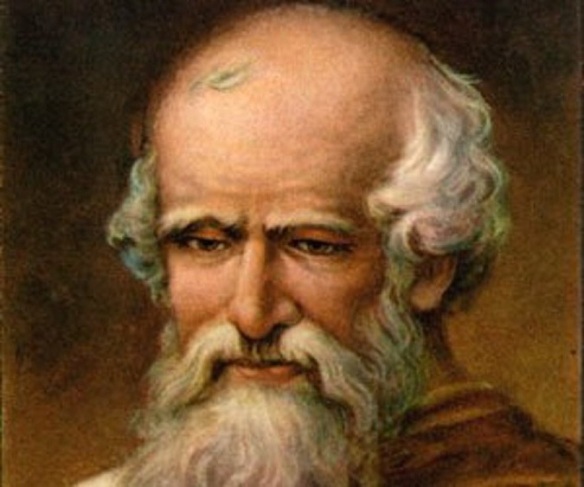 [Archimedes, looking disappointed for some reason. Image courtesy of Wikipedia.]

Imagine the first puzzle. The very first one. What form would it take? Would it involve words? Numbers? Pictures? Would it be a riddle? A jigsaw? Would there be pieces to move around and place? Would it require scratchings in ink and quill to solve, or marks on a clay tablet?

It’s hard to visualize, isn’t it?

The subject of today’s blog post was probably not the first puzzle, but it’s the oldest puzzle that we can trace back to its origins. And those origins are more than two thousand years in the past.

Fellow puzzlers, allow me to introduce the Ostomachion. 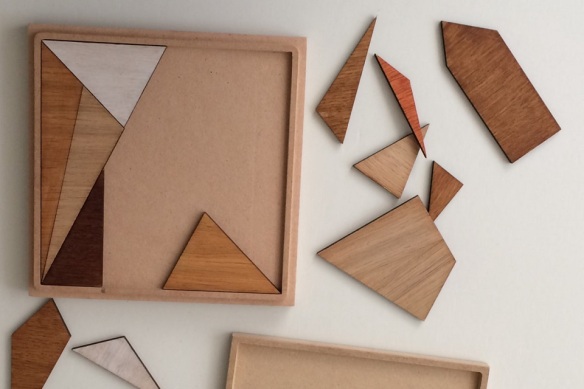 [The puzzle can be found in paper, wood, plastic, and other forms. The original was supposedly made from bone. Image courtesy of Oh So Souvenir.]

The Ostomachion, also known as the Stomachion, the Syntemachion, the Loculus of Archimedes, or Archimedes’ Square, consists of 14 shapes that can be arranged to fill a square.

Created by Archimedes in the 3rd century B.C., the Ostomachion might’ve vanished from history if not for the clever investigative skills of researchers. You see, the Ostomachion was among other writings by Archimedes that were transcribed into a manuscript in 10th-century Constantinople. The manuscript was then scraped clean and reused in the 13th-century as a Christian religious text (becoming a palimpsest in the process), where it remained until at least the 16th century. 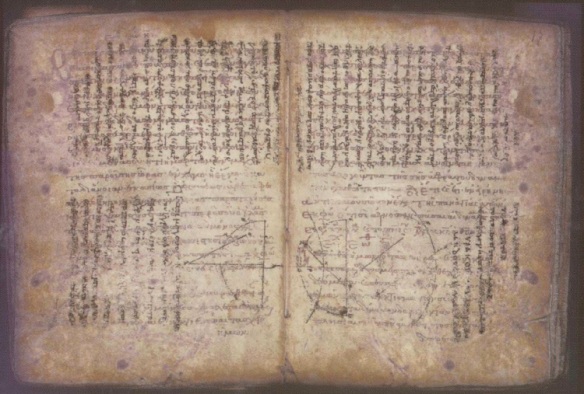 Thankfully, the erasure was incomplete, and in 1840, a Biblical scholar named Constantin von Tischendorf noted the Greek mathematics still visible beneath the prayer text. Another scholar recognized it as the work of Archimedes.

After changing hands multiple times, being sold (most likely illegally), modified by a forger, and then finally allowed to be scanned with UV, infrared, and other spectral bands, revealing the full mathematical text (as well as other works, all of which are now available online).

This palimpsest is the only known copy of both the Ostomachion and another Archimedean work, “The Method of Mechanical Theorems.” 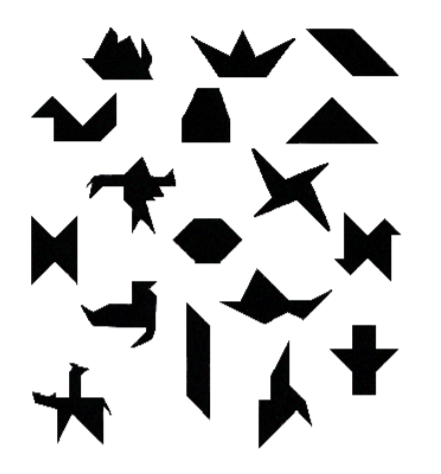 [Shapes to be solved. Image courtesy of Latinata.]

So, all that trouble for a place-the-pieces puzzle? Obviously there’s a bit more at play here.

After a solver has managed to fill the square , they are invited to use the pieces to make a variety of different shapes (similar to tangram puzzles). Players could compete to see who could use all of the pieces to form the different shapes first. It’s believed that this is where the name Ostomachion came from, as it translates to “bone fight” in Greek.

But, naturally, Archimedes didn’t stop there, delving into the mathematics of the puzzle itself, and trying to calculate how many unique solutions there were to the Ostomachion square. How many different ways could you fill the square?

That question wouldn’t be answered until 2003, when Bill Cutler — a mathematician with a doctorate in mathematics from Cornell — and some brute-force computing figured out that there were 17,152 solutions.

But, wait, it’s a square. So, technically, there must be quite a bit of overlap in those solutions, since some of them would be rotations or reflections of other solutions.

So what’s the real answer?

That, my fellow PuzzleNationers, is quite a puzzle.