The newest tool in the arsenal of big thinkers and big dreamers is crowdfunding, wherein creators take their ideas directly to the people in the hopes that a lot of small donations will add up into capital to make their ideas reality.

Websites like Kickstarter and Indiegogo have literally made dreams come true — heck, LeVar Burton’s Reading Rainbow Kickstarter just raised over a million dollars in ONE DAY — and it’s quickly becoming a key outlet for worthy puzzle projects. Some top-tier constructors are going straight to the fanbase with their puzzles, and with marvelous results. Constructors like Trip Payne, Eric Berlin, and Matt Gaffney have all had success on Kickstarter and Indiegogo with previous campaigns.

In the past, we’ve covered several crowdfunding campaigns, including Rachel Happen’s Baffledazzle puzzles, The Doubleclicks’ board game and pop culture-infused musical endeavors, and a company making board games and card games accessible to the visually challenged.

And I wanted to spread the world about some other puzzly endeavors that might interest the PuzzleNation readership.

Peter Gordon is known across the puzzle community for his Fireball Crosswords, a challenging brand of puzzle for ambitious solvers, as well as an easier weekly news-themed puzzle for The Week magazine. So now, he’s combined the two to create Fireball Fortnightly News Crosswords!

Every two weeks, you’ll receive a crossword by email that includes as many topical news-related items in the grid as possible. So you get your news and your crossword in one fell swoop. Not as difficult as his usual Fireball Crosswords, these puzzles will still let you flex your solving muscles twice a month.

With backer prizes like additional crossword books and the chance to create a puzzle with a master puzzler, Fireball Fortnightly News Crosswords might be right up your alley!

Blackout is similar to Lights Out, Q*Bert, and other puzzle games where you must make every icon on the screen the same color, which becomes a tougher task to complete as the patterns grow more complicated and each click affects neighboring shapes.

The game will feature multiple levels of difficulty — including one where the icons change shape as well as color — ensuring it’ll keep you thinking and clicking for quite some time to come.

Finally, we have Block Party.

Block Party is a pattern-matching game featuring several shapes, colors, and patterns, and players must find parties — groupings of similar aspects or collections of each different aspect — without touching the blocks. The first player to shout “Party!” then reveals the grouping they’ve spotted, and the game continues.

With backer rewards like a printable version of Block Party and limited-edition versions of the game, this campaign is ready to engage solvers of all ages.

The amazing thing about all of these projects is that the audience, the potential fans, have an enormous role to play not only in sharing their thoughts with game and puzzle creators, but in showing their support for designers and projects they believe in, and doing so in a meaningful way.

Here’s hoping each of these projects finds success.

Follow-Up Friday is a chance for us to revisit the subjects of previous posts and update you, the PuzzleNation faithful, on how these projects are doing and what these people have been up to in the meantime.

Today, I’ve got a few short updates for you.

The book is Sit & Solve Sports Crosswords, and it’s not only affordable, but it’s designed to fit right in your pocket for easy travel! Spanning sports from baseball and soccer to hockey and basketball, you’re sure to find a puzzle here to excite your inner sports fan! You can get it through Barnes & Noble or Amazon!

Now, I’d like to revisit two of the Kickstarter campaigns I profiled back in February.

The first was the campaign launched by Angela and Aubrey Webber, better known as musical duo The Doubleclicks. (Check out their session of 5 Questions here!)

They CRUSHED their goal of $18,000 dollars, eventually topping $80,000 and ensuring their musical magic would keep them both very busy for the next year and beyond. Congratulations Angela and Aubrey!

The second was the kickstarter for Pairs, a card game developed by James Ernest of Cheapass Games. (Check out James’s session of 5 Questions here!)

Hoping for $12,000 to launch the Pairs card game, James raised over $300,000 dollars, enabling the company to prepare TWELVE different variations of Pairs for publication. (Some of these will be limited runs, so backers will have first pick of games that may never hit the public market!)

Are there any stories or features from the PuzzleNation Blog you’d like an update on? Let us know and your suggestion could be the focus of our next Follow-Up Friday!

And I’m overjoyed to have The Doubleclicks as our latest 5 Questions interviewees! 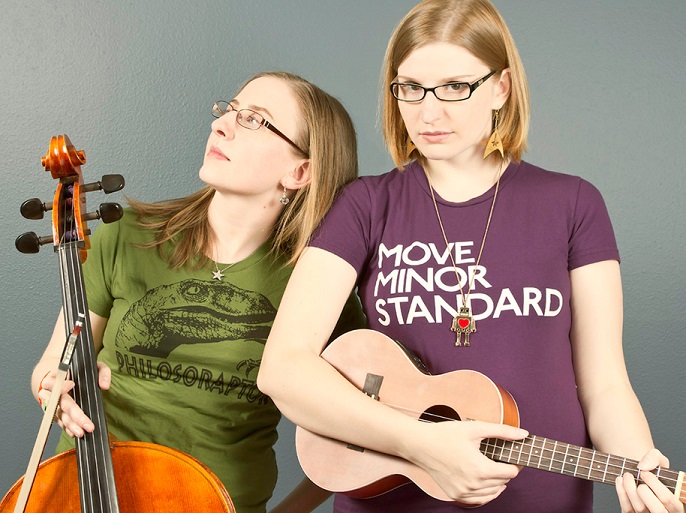 The Doubleclicks are Laser and Aubrey Webber, two Portland-based siblings who spin musical magic with cellos, guitars, and catboards (keyboards that meow). Advocates for science education, geeky self-esteem (especially for girl geeks), and the joyful fusion of cats and Netflix, their relentless charm has made them a favorite at conventions and game stores alike.

On the heels of their phenomenally successful Kickstarter campaign, they’re preparing for a flurry of upcoming tour dates, and that’s just the beginning of all the Doubleclicks goodness you can expect in 2014.

Laser and Aubrey were gracious enough to take some time out to talk to us, so without further ado, let’s get to the interview!

5 Questions for The Doubleclicks

1.) You’ve created marvelous and charming songs about Agent Coulson of S.H.I.E.L.D., dinosaurs, teddy bears, and the guy who yells “Freebird” at concerts. Can you tell us a little bit about how you choose what instruments and arrangements you’ll use for a given song? That seems like a puzzly endeavor in itself.

Great question! Some choices are obvious when it comes to arrangement: if we write a Christmas song, for example, it’s likely there will be some jingle bells. We try to mix up our style, and fortunately with a cello there are a lot of options: from a Tango to a rock song, depending on whether we are trying to go for a parody of style (like the Freebird song) or a genuine take (like our lullaby).

2.) You have a strong connection to the board game community, with your signature dice, your collaborations with creators like James Ernest, and your recent appearance on Wil Wheaton’s internet board game show TableTop. Since music and board games are both very cooperative endeavors, are they worlds that mesh well together, or is there something in particular about the Doubleclicks that invites such synergy?

Shortly after starting our band, we released a music video for our song about Dungeons & Dragons, and after that we started being invited to play at conventions. We’ve always been game fans, but going to these cons as performers afforded us a new opportunity: to actually meet the people who make these games, which is really, really, super, awesome. I think the subject matter of the songs and the content of our hearts makes us want to hang with game designers. And we are super serious about making a Doubleclicks card or board game sometime soon.

(Check out this fun Doubleclicks song about playing board games
to prepare for their appearance on Tabletop!)

3.) During your recent Google Hangout when you discussed your Kickstarter campaign, you mentioned you don’t have a lot of time for puzzles, but you enjoy them. On the rare occasion you do get to indulge in some puzzle fun, what are your favorites?

We were introduced to the puzzling word properly thanks to Team Snout, puzzle creators of amazing quality here in Portland. They’re involved in an event called Puzzled Pint which is like EXTREME pub trivia (except puzzles), and that is just a huge awesome fun time. They also involved us in a big event called WarTron a couple years ago in which they actually embedded a puzzle in our setlist, which was awesome.

4.) What’s next for the Doubleclicks?

We just wrapped up a Kickstarter that will keep us busy for at least a year. We’ll be releasing an album this spring as well as new songs and videos every month all year, and we’ll have a season of weekly songs during the summer. It’s going to be a really busy year and we are excited.

5.) If you could give the readers, writers, aspiring musicians, and puzzle fans in the audience one piece of advice, what would it be?

Make great friends and be involved in interesting things: if you’re a musician, play games. If you’re a game designer, get super into cooking. 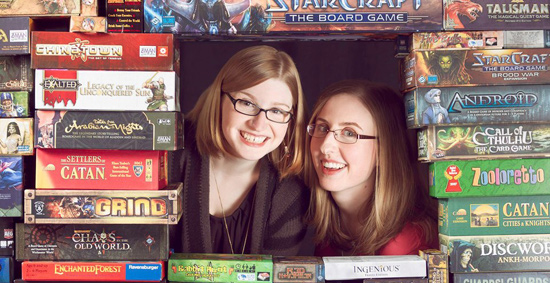 Many thanks to Laser and Aubrey for their time. Check out their website for all things Doubleclicks, and be sure to follow them on Twitter (@thedoubleclicks) and Facebook, sample their music on Bandcamp, and subscribe to their YouTube channel for videos and other treats! I cannot wait to see what they create over the coming year.