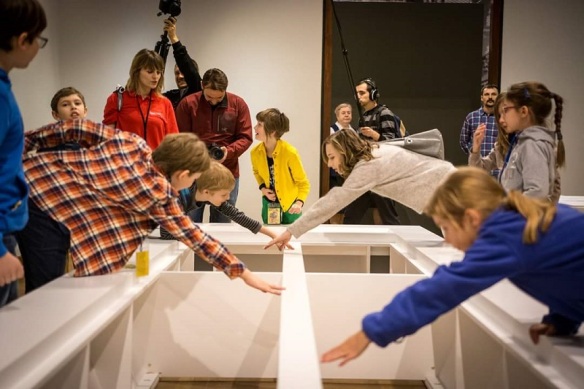 [All images courtesy of Robert Mordzon.]

The National Museum in Warsaw is taking an intriguing approach to introducing children to the value of museum-driven learning.

They’ve launched the “Anything Goes” museum, an educational experiment wherein children select, develop, and curate the museum’s main exhibit for a period of time.

According to the announcement on the National Museum’s website:

A group of 69 children aged 6–14 was divided into six curatorial teams. Over six months, the participants got to know the Museum and worked on the exhibition during weekly 4-hour meetings. The teams of junior-curators prepared the scripts and selected almost 300 works to be displayed….

The exhibition, which is divided into six individual segments, features works from all museum collections: ancient and Oriental artefacts, craft objects, old and contemporary sculptures, photographs, drawings and prints, coins and medals, clothes and paintings created in various periods. Many of these works have never been presented to the public. The children say that they “found and liberated them from the museum’s storeroom”.

And part of the “Anything Goes” museum is a dazzling audiovisual creation of technology pro Robert Mordzon: a giant interactive crossword puzzle.

Clues are placed in front of light-up blocks in the grid which indicate the number of letters in each answer.

If all 130 boxes are filled in and the grid is completed, sounds and a celebratory “disco light show” are played.

Not only is this an awesome way to bring puzzling to a newer audience, but it’s an impressive meld of science, technology, and wordplay. The fact that industrious children were behind bringing it to life is just the icing on the cake.

This is accessible puzzling at its most vivid and inspiring. Clearly when “Anything Goes,” anything is possible.

[A big thank you goes out to Kathy Matheson, aka Crossword Kathy, who brought this story to my attention.]