Your friendly neighborhood puzzle blogger took a trip across the country to attend Norwescon, the premiere fantasy and science fiction convention in the Pacific Northwest.

This was the 42nd edition of the convention, and if you know your sci-fi novels, then you’re not surprised that there were all sorts of references to The Hitchhiker’s Guide to the Galaxy. (The number 42 is a big part of the first novel.)

The convention’s subtitle was “Don’t Panic” (another HHGTTG reference), and lots of convention attendees were in their bathrobes or carrying towels, representing the two main characters of the series, the bathrobe-wearing Arthur Dent and the towel-toting alien tourist Ford Prefect.

As with any convention, the costuming was amazing. There were fairy godmothers, vikings, mermaids, Daleks, folks in Seahawks-colored finery (it was Seattle, after all), a Predator offering free hugs, an inflatable T-rex costume with those robotic grabber arms, and even photo ops with Krampus and Santa! (And Easter Krampus on Sunday.)

One of the oddest moments for me was seeing a group of people in uniforms I didn’t recognize, and realizing they weren’t con attendees, they were the flight crew for an international airline. (The hotel was across the street from the airport.)

Although many of the convention’s panels and events have a writerly focus, plenty of attention is also given to art, films, games, and pop culture, so there was loads for puzzle and game fans to enjoy at the event.

The dealers room — the main area to shop for costumes, books, fabric, t-shirts, memorabilia, collectibles, and more — had several game shops represented, toting loads of games at good prices. (Several of which we’ve reviewed on the Blog in the past, and some that will be reviewed in the future.) 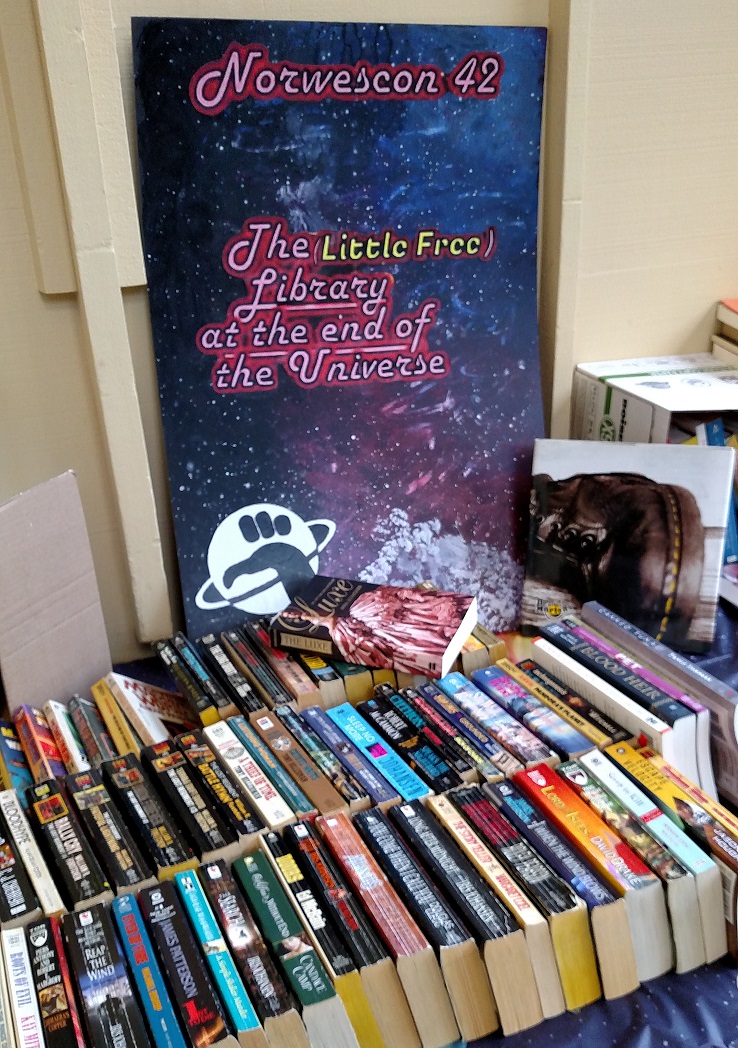 [All hotel nooks and crannies were stuffed with thematic exhibits, including this delightful leave-a-book, take-a-book mini-library a la The Restaurant at the End of the Universe.]

Board game demos were available all day, complete with skillful players to introduce newbies to various games, as well as tabletop roleplaying adventures in all sorts of settings and systems, from Dungeons & Dragons and Vampire: The Masquerade to Pathfinder and more. In fact, one of the gaming spaces was right down the hall from my hotel room, and it was PACKED morning ’til night with enthusiastic roleplayers telling stories, rolling dice, and battling monsters.

There were open games as well as sign-ups for specific games and adventures, including a multi-table multi-hour battle for gang supremacy in the fictional city of Waterdeep.

One of the most intriguing puzzle/game experiences available to try at the convention was Artemis.

Artemis is a spaceship bridge simulator that allows a group of players to essentially play out a Star Trek-esque adventure. Each player has instructions, controls, and a laptop in front of them, as well as a big screen for everyone to view (much like the main viewer on the bridge of the Enterprise).

Two teams, each piloting their own ship (the Artemis or the Intrepid) must battle foes, trade goods, dock with space stations, and explore the galaxy, all while maintaining their weapons, shields, energy usage in the ship, and piloting control, as well as communicating with their sister ship through headset.

I moved back and forth between the two “ships,” watching as the players navigated different challenges, cooperated (and disagreed) on command decisions, managed their resources, and ventured between the stars, all while some pretty impressive graphics tied the whole play experience together. 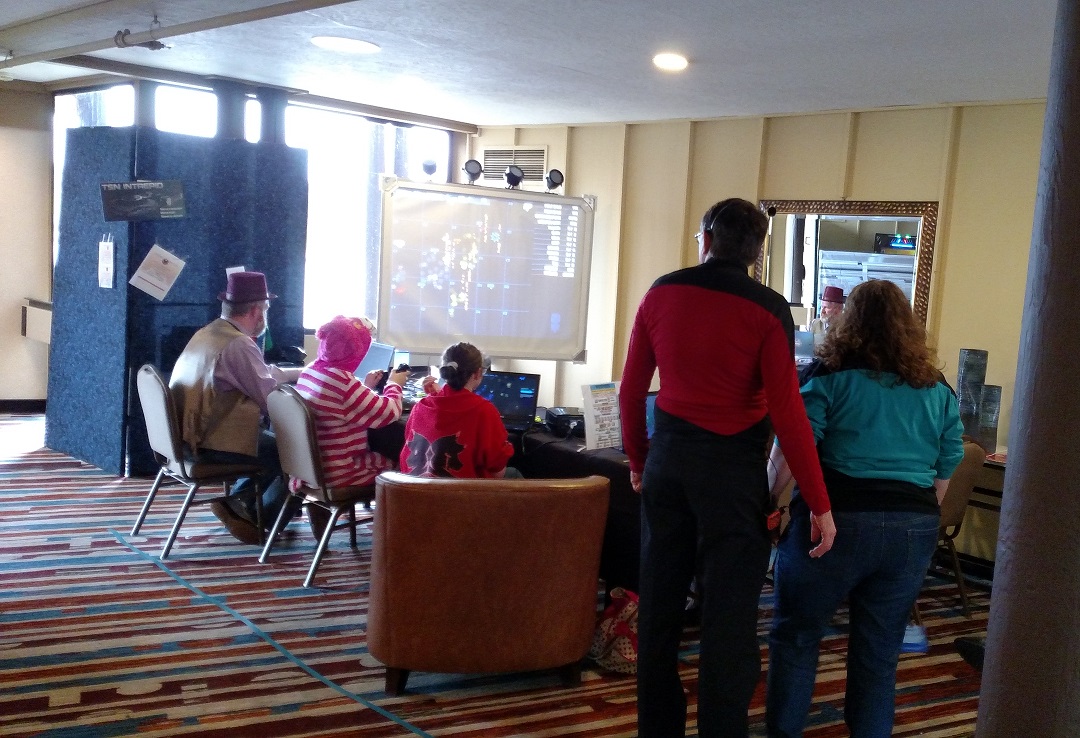 What really struck me about the Artemis style of play was how much communication was required for success. It is a co-op game in the same vein as Castle Panic!, Forbidden Island, or Spaceteam, but with a lot more personal responsibility. Plus the laptop interfaces for each station were slick and well-designed, bringing that polished Star Trek: The Next Generation feel home.

I was also responsible for some of the puzzliest events at the convention. Although I did participate in some panels on writing, literature, roleplaying games, and movies (both good ones and the worst of b-movies), the two events that were the main focus of my time were a LARP/scavenger hunt based on The Hitchhiker’s Guide to the Galaxy and an escape room based on Star Wars.

The HHGTTG event was built as an in-universe scavenger hunt where players (who were all expected to bring their towels, of course), had to complete five tasks. The completion of each task led to a rune for the players to record on their gamesheet. and earn five runes, then spell them out in a secret location using their towels, in order to ask an important question.

Some of the tasks included:

They had to earn all five runes, then find me in a secret location and spell out the runes with their towels. If they did so correctly, they would bring one of the missing dolphins back to Earth (and received a small stuffed one for their efforts). 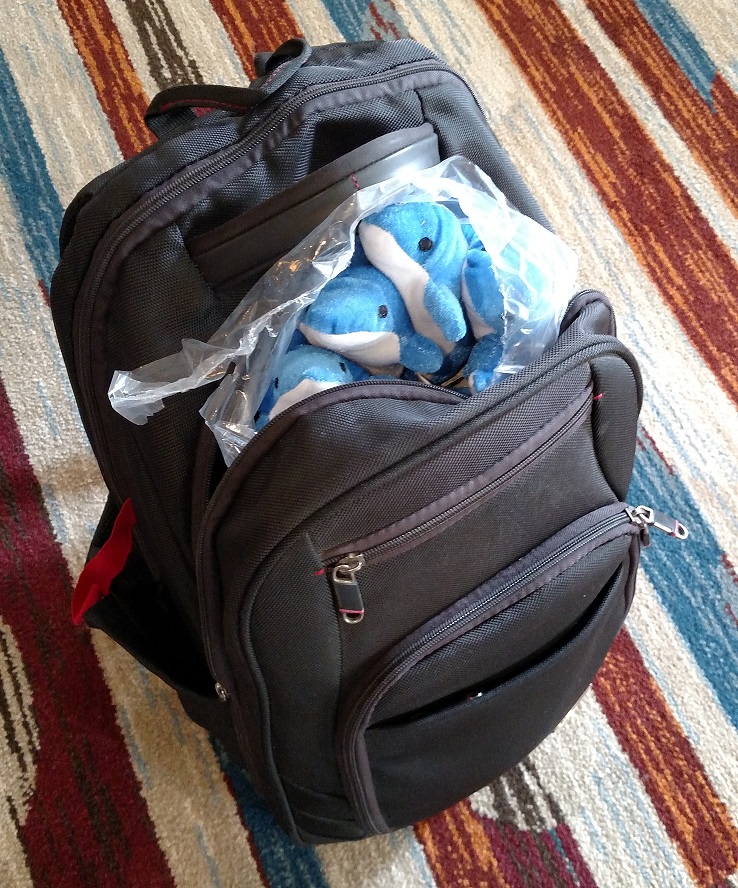 [A bag full of dolphins, awaiting a possible return to Earth.]

The Star Wars event was a traditional escape room with puzzles to solve, boxes to unlock, combinations to find, keys to uncover, and a room to escape under a time limit. Designed for the teenaged attendees, the escape room was set on a bounty hunter’s ship, and all of the players were recently captured by the bounty hunter, awaiting transport to an Imperial prison.

But the bounty hunter has fallen victim to one of his own security protocols, so all of the “prisoners” have a chance to escape, if they disable the (Nerf gun-)armed droid blocking the escape pod, as well as either shut off the radiation leak near the pod OR gather enough bacta to heal themselves from radiation damage in order to actually survive the escape. 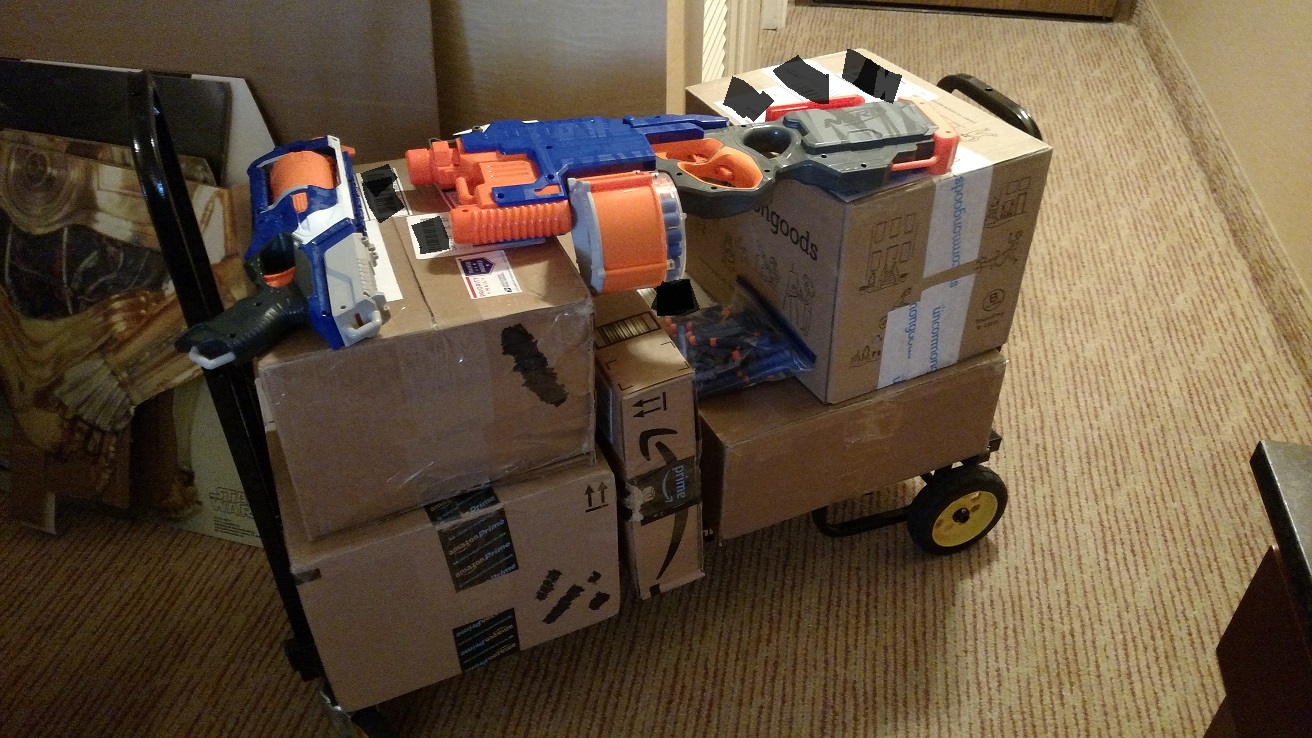 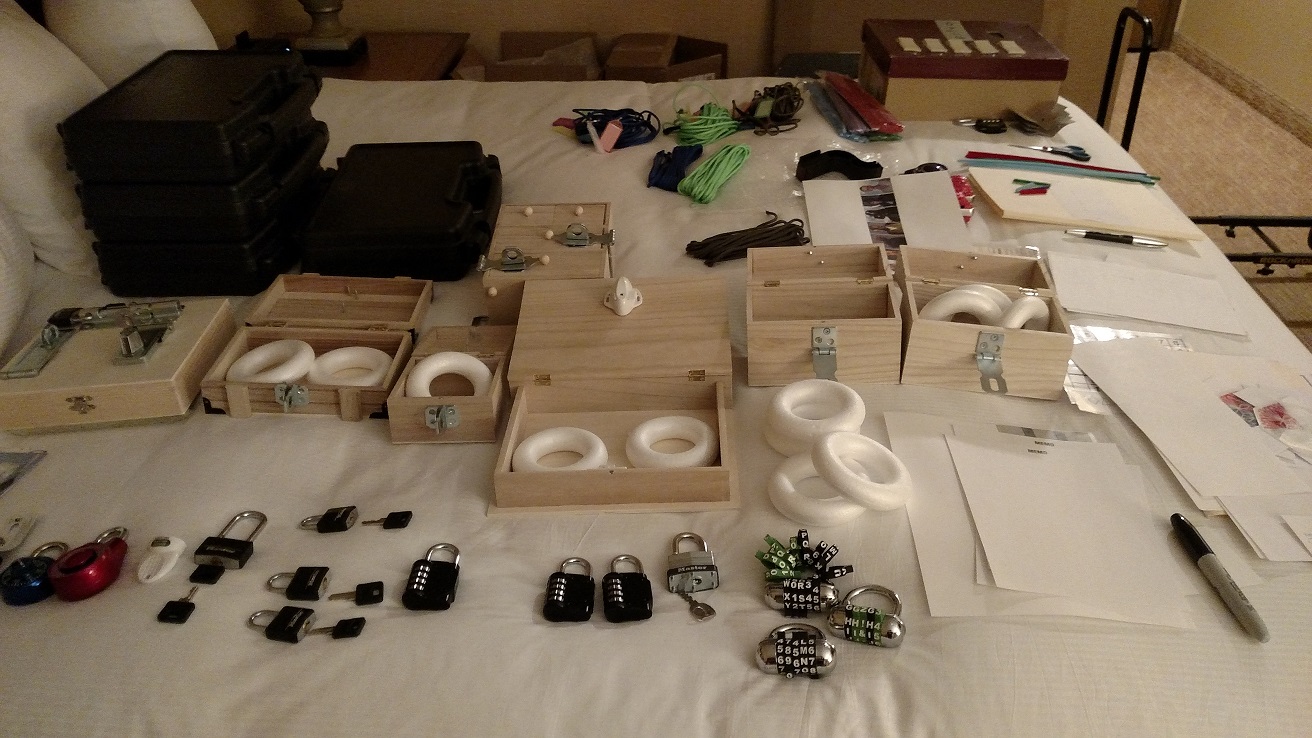 [The contents of said shipped boxes. An escape room mid-construction.]

Although some of the boxes were opened out of order (by brute force, rather than proper solving) and one of the puzzles had an unfortunate printing error, the players unraveled the mysteries of the bounty hunter’s ship and escaped with only seconds to spare before the Imperials arrived. SUCCESS!

(Plus friend of the blog Jen Cunningham cooked up some lovely victory certificates for the players, which was a cool bonus. Thank you Jen!)

More importantly, despite the hiccups encountered during both events, everyone had fun while playing (either walking away with a small dolphin or a certificate).

The entire convention was a blast (an exhausting one, but a blast nonetheless), and I highly recommend attending Norwescon next year to any fans of horror, sci-fi, fantasy, writing workshops, games, roleplaying, and of course, puzzles.