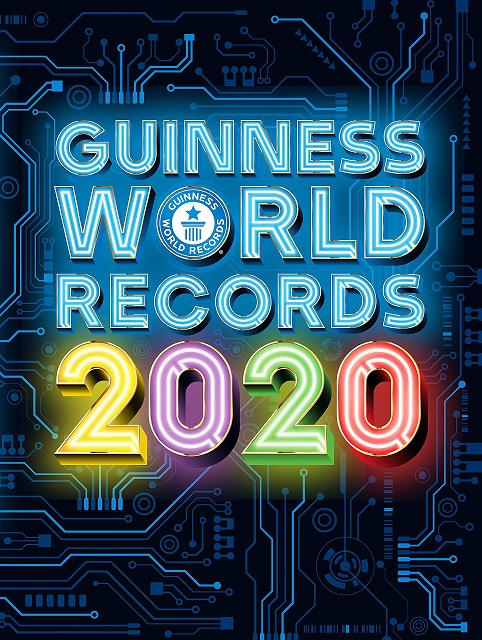 A few years ago, I wrote a post chronicling some of the puzzly world records I’d found while reading the latest edition of the Guinness Book of World Records. Back then, I was surprised to see a two-page spread dedicated to puzzle-centric records.

As I perused this year’s edition of the iconic record-keeping tome, there was a two-page spread dedicated to Rubik’s Cube world records alone. (There were numerous other puzzly records scattered throughout the book as well.)

So, since 2019 is drawing to a close in the next few weeks, why not dedicate one of the last blog posts of 2019 to the most up-to-date puzzly world records I can track down?

Shall we? Let’s shall. 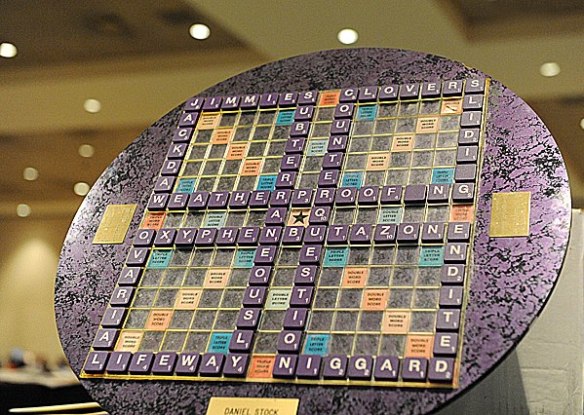 On January 21, 2012, Singapore’s Toh Weibin amassed the highest score ever recorded in a Scrabble tournament at the Northern Ireland Scrabble Championship in Belfast, scoring 850 points.

January is apparently a good month for word-tile world records, as on January 5, 2015, Lakshan Wanniarachchi set a record for playing the most opponents in Scrabble simultaneously — 40! — in Colombo, Sri Lanka. He defeated 31 of the 40 players in order to qualify for the record.

(So, yeah, you might have more Words with Friends games going at once than Wanniarachchi did, but did you win that many? Probably not.) 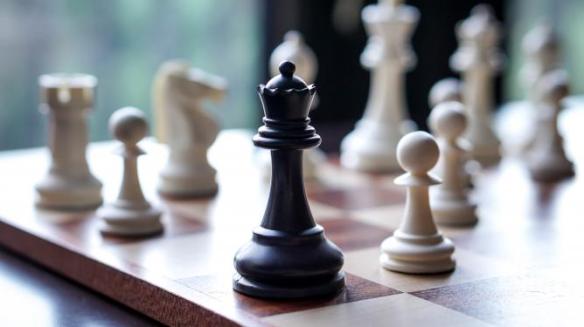 Instead of multiple opponents, how about one opponent for 20 hours and 15 minutes?

That’s how long chess masters Ivan Nikolic and Goran Arsovic faced off in Belgrade on February 17, 1989, where they set a world record for the most moves played in a single chess game: 269.

We can stick around Europe for one more puzzly world record, this time in Wageningen, Netherlands, as the Ceres Student Association teamed with Hasbro to create a Monopoly board the size of three-and-a-half tennis courts. Yes, on November 30, 2016, they unveiled a 9,687-square-foot version of the famously frustrating game board.

9,687 square feet? That’s pretty big, I guess. Unless, of course, you’re talking about a world record set in Dubai in the United Arab Emirates, where everything is ludicrously oversized and lavish. 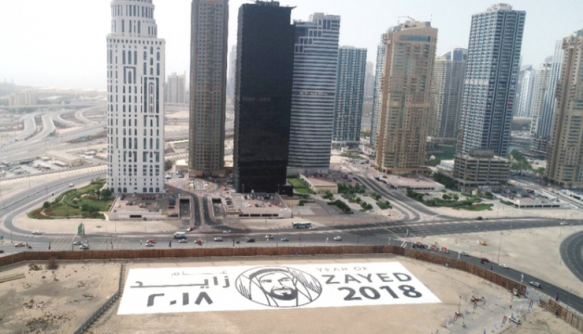 And speaking of jigsaw puzzles, students at the University of Economics Ho Chi Mihn City in Vietnam set a record by completing the jigsaw puzzle with the most pieces — 551,232 pieces! — on September 24, 2011, breaking the record previously set in Singapore — 212,323 pieces — which had stood since 2002. 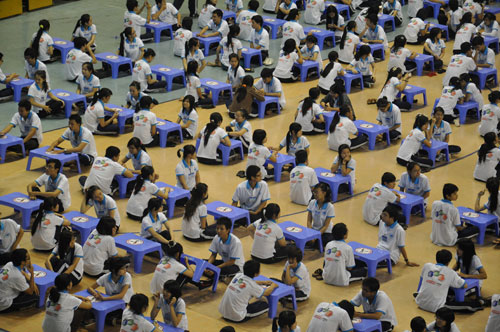 According to the Guinness article covering the event:

It took the students 17 hours to first break up the 3,132 sections, each containing 176 pieces, into which the jigsaw puzzle had been divided, and then re-assemble them to create the puzzle.

That’s what Richard Bragg, Daniel Egnor, Amanda Harris, and Ana Ulin — aka Bloody Boris’s Burning Bluelight Brigade — tackled when they set the world record for most escape rooms attended in one day. On October 3, 2018, they visited 22 escape rooms in 24 hours in Moscow, Russia. The team’s success rate was just as impressive; the team escaped all but one of the rooms in the allotted time.

Of course, we couldn’t have a world records puzzling post without talking about the Rubik’s Cube. 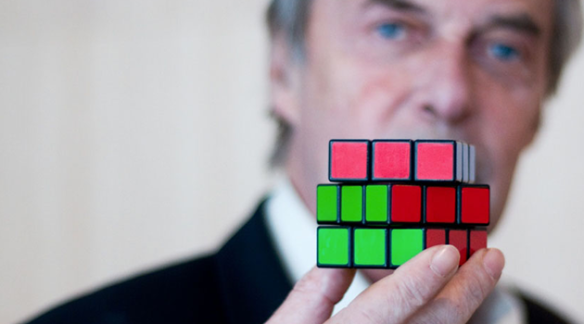 The official fastest time for solving a standard 3x3x3 Rubik’s Cube is held by Feliks Zemdegs, who set an average time of 5.8 seconds in the 2017 Malaysian Cube Open. (In competition solving, the average time across three different solves comprises your official time.)

The unofficial record for the fastest 3x3x3 solve — meaning it was outside of tournament conditions — was set in China: 3.47 seconds by Du Yesheng.

But that’s only the official size. What about other Cubes? Let’s look at the fastest solves (that I can verify):

And, just to show off, Stanley Chapel holds the record for a blindfolded 4x4x4 solve: 1 minute, 29 seconds. 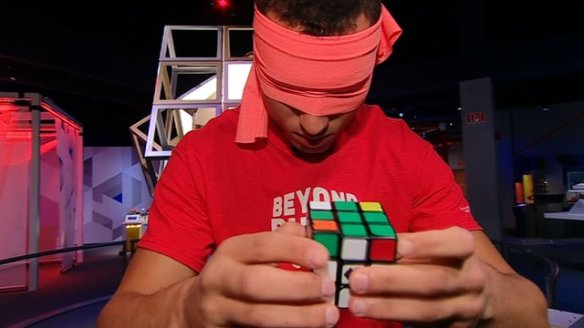 Of course, now that we’ve mentioned one weird way to solve a Cube, let’s explore a few others.

Daniel Rose-Levine holds the record for solving a 3x3x3 with his feet: 16.96 seconds. Not to be outdone, Que Jianyu unscrambled a trio of Rubik’s Cubes with his hands and feet simultaneously in just 1 minute, 36.38 seconds, in Xiamen, Fujian Province, China. (For the record, he solved one in each hand and one with his feet).

He later hung from a pole to record the fastest time to solve a Rubik’s Cube upside-down: 15.84 seconds. (He also holds the record for solving three Cubes while juggling, doing so in 5 minutes, 2.43 seconds.)

Jack Cai solved one blindfolded in 16.22 seconds. On July 22, 2018, at the Delhi Monsoon Open in Ghaziabad, Uttar Pradesh, India, Shivam Bansal shattered the field with the most Rubik’s Cubes solved while blindfolded: 48 out of 48 in under 1 hour.

George Turner holds the record for solving on a pogo stick: 24.13 seconds.

[Here’s a YouTube video of a different, but still impressive, underwater solve.]

Phillip Kwa’han Espinoza holds the world record for most 3x3x3 Cubes solved while running a marathon. On November 14, 2015, he solved 839 Cubes over the course of 4 hours, 56 minutes, and 1 second during the 26.2 mile run in the REVEL Canyon City Marathon in Azusa, California, shattering the previous record of 175 Cubes.

That’s how high up Dan Knights was in June of 2003 when he jumped from a plane and solved a Rubik’s Cube in freefall while skydiving. He solved it in 34 seconds… which is good, because he only had 40 seconds before he’d have to deploy his parachute to safely execute a 12,000-foot fall.

To close things out today, let’s look at some Rubik’s records about quantity.

What about the most cubes solved:

Finally, in January 27, 2018, the Kaligi Ranganathan Montford Group of Schools set a world record by bringing together the most people simultaneously solving Rubik’s Cubes — 3,997 — at Jawaharlal Nehru Stadium in Chennai, India. The average time to solve for the assembled students? A few minutes. 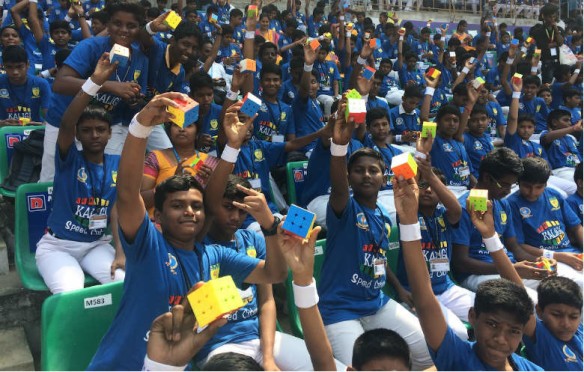 Imagine the records people will set in the 2020s.