It’s always interesting when TV shows incorporate puzzles into their stories. Not only do we get to see what Hollywood (and by extrapolation, the general public) thinks about a given puzzly experience, but we learn more about the characters when they face a particular puzzle or challenge.

This is especially true for sitcoms and comedies, since they usually have less time to focus on the puzzling and therefore put the spotlight on character relationships.

And it occurred to me that there are a number of different shows over the last few years that have featured the characters in escape room-style puzzle settings.

Why don’t we take a look at how accurately these puzzly experiences were portrayed, how difficult the room appeared to be, and what the characters’ solving skills were like?

Please enjoy as we explore fictional escape rooms from TV in our latest edition of Puzzles in Pop Culture!

For our first offering, we turn to the CBS juggernaut The Big Bang Theory. Over the years, TBBT has featured puzzly activities like giant Jenga, a holiday-fueled session of Dungeons & Dragons, and a scavenger hunt with puzzly clues.

So I wasn’t surprised that their take on escape rooms was the same: fairly accurate, but simplified and streamlined for a mainstream audience.

The room in TBBT is pretty spacious, moreso than pretty much any escape room I’ve seen. But the level of detail is easily something achievable for high-end rooms. Also, I’ve heard about escape rooms with actors playing zombies before, so this is legit.

(In fact, one I heard about in Washington D.C. had a zombie on a chain; the chain got longer the more time solvers took to crack puzzles, cutting the room in half at one point!)

We don’t get to see much of their solving, as they allude to puzzles conquered instead of showing us, so it’s hard to gauge difficulty. But given that most of the characters featured in the scene hold doctorates, we can safely assume the puzzles were middle-of-the-road or slightly harder.

However, the episode ignores the fact that you’re trying to escape the room in a certain amount of time. The characters seemed disappointed by their impressive performance, but they probably posted one of the top times in that room’s history. Nothing to sneeze at. 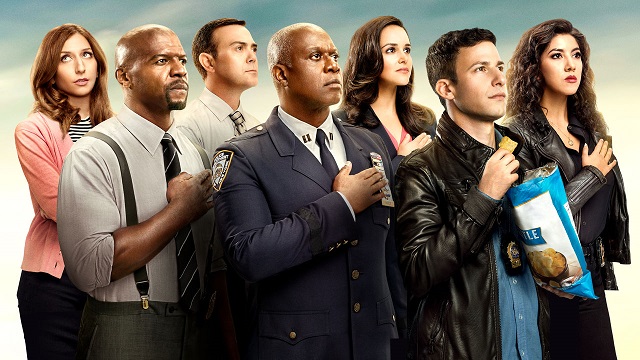 Another show that hasn’t shied away from puzzly content is the former FOX and current NBC hit Brooklyn Nine-Nine. This comedy/drama set at a New York City police precinct has featured a seesaw brain teaser, a crossword-fueled arson mystery, and several multilayered heist storylines set around Halloween.

Puzzle enthusiast Captain Holt invites his fellow officers out to an escape room, and is dismayed when the disinterested Gina and the bumbling Hitchcock and Scully end up being his only fellow players. The group is immediately hampered by Hitchcock wasting two of their three hints, and Holt accidentally wasting the third.

The hint system is usually not as rigid in escape rooms. Three hints is common, though many places allow you to ask for more; sometimes there’s a time penalty, sometimes not. Also, the room in B99 is a three-hour challenge, which was a surprise. The standard time is an hour, though I’ve seen rooms push it to ninety minutes.

The group has also clearly not tried the classic escape room method of “touch everything,” because an hour and a half into the game, having found only one of the four keys needed to escape the room, Holt has not yet investigated the bright red phone sitting out in the open.

This is another escape room where difficulty is tough to judge. Unfortunately, we’re not given enough details on the first key (which involves some sort of chess puzzle) and the fourth key to really gauge the room. But despite the rocky start, the lovable team of misfits manages to escape.

Next, let’s turn our eyes to It’s Always Sunny in Philadelphia.

The characters in this darkly comedic show all consider themselves devious masterminds, but for the most part, they tend to get in each others’ way and foil their own schemes through silly self-sabotage. Although a few impressive schemes do come to fruition over the years, it’s hard to consider this group a crackerjack team of puzzle solvers.

This escape room breaks the mold quite a bit, since the company brings the escape room trappings to the apartment of two of the characters. This is much more elaborate than any escape room set you can buy for the home, and I don’t know of any companies that deliver an escape room to the house.

You might think this home field advantage would be a boon, but instead, all chance of cooperation immediately goes out the window. One pair takes the key to a lock, the other pair takes the lock, and they spend the entire time negotiating instead of solving.

[Image courtesy of IMDb. Because of the language involved, I couldn’t
use an actual video clip and keep the blog post family friendly.]

Once they actually agree to collaborate and open the lock, they discover a list of tasks for them to complete, and they have virtually no time left to do so. (Our only hint to the room’s difficulty comes from the fact that Dee has completed the room beforehand, so it can’t have been too difficult.)

They claim victory when Sweet Dee falls out a window after getting trapped in her brother Dennis’s bedroom. In order to check on Dee’s status, the game runner opens the door and the remaining players consider it a win.

The final entry in our comedic quartet of escape room episodes comes from the musical CW show Crazy Ex-Girlfriend. This romantic drama, comedy, and coming-of-age story often features characters breaking out into elaborate song and dance routines, and many of the songs have become modern classics.

The show didn’t tackle puzzly content often, and indeed, the escape room in question is a b-plot in this particular episode, as main character Rebecca offers her escape room experience to friend Paula and her two disinterested sons.

The escape room is medieval-themed and huge, with lots of great set pieces and detail. The mix of exploring, touching things, solving puzzles, cooperating, and placing objects in particular places are all very traditional escape room moments.

Though I was a little disappointed that the elements of the final puzzle are sitting out in plain sight the whole time. You could easily ACCIDENTALLY solve the last puzzle first and be out in minutes.

But Paula’s sons prove to be able puzzlers, attentive and clever, revealing things about themselves that Paula didn’t know. (In fact, the entire escape room subplot is all about Paula learning about who her sons have become, which is Puzzly Storytelling in Sitcoms 101.)

They all escape, having found new common ground, and it’s easily the most delightful ending of the four escape room scenarios we’ve looked at today.

What did you think of this look at escape rooms from TV, fellow puzzlers? Should we look at more fictional escape rooms and see how they hold up?

I’ve heard Bob’s Burgers has one, as well as Schitt’s Creek. Let us know in the comments section below! We’d love to hear from you.

Hey, have you checked out our special summer deals yet? You can find them on the Home Screen for Daily POP Crosswords and Daily POP Word Search! Check them out!