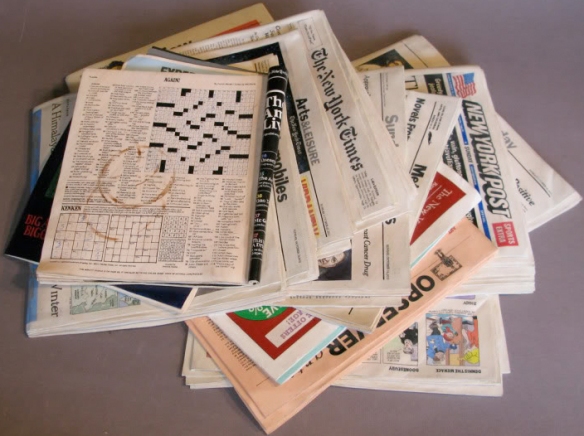 Someone recently asked me about my favorite crossword clue, and after mentioning four or five off the top of my head, I cut myself off and tried to explain that it’s impossible for me to pick one.

So many clues are out there that surprised me, or outwitted me, or made me laugh, or made me think in an unexpected way. I could never narrow it down..

Regular readers who have seen my reviews of various crossword tournament puzzles will recall I like to highlight favorite clues.

I actually keep track of clues from constructors as I solve various crosswords. Not only are they often witty, hilarious, and/or impressive, but they inspire me as a puzzler to always try to find entertaining, engaging new angles for these crucial crossword elements.

So today, I’d like to pull some favorites from my personal clue vault and give them some time in the spotlight.

(I’m crediting the constructor listed on the byline for each clue. These clues may have been created elsewhere and reused, created by the constructor, or changed by an editor, I have no way of knowing. So I’m just doing my best to give credit where credit is due.)

I love a good misdirection clue, because it not only has a straightforward meaning that sends you one way, but it has a true secondary meaning that usually only emerges once you’ve considered the clue for a bit.

Constructor Amanda Rafkin has a knack for these sorts of clues, delivering terrific examples with “Decline a raise?” for FOLD and “One who’s pro con?” for NERD.

It’s particularly great when a constructor can use a misdirection clue to put a new spin on a word you’ve seen dozens of times before. Peter Gordon did just that with both TYPO (“Character flaw?”) and AHS (“Sounds made with depressed tongues”), and even manages to be topical whilst doing so, as he did with the clue “Page with lines of dialogue” for ELLIOT.

Yacob Yonas took an awkward RE- word — all too common in crossword grids — and made it shine when he clued REHEM as “Take up again, say.” Priyanka Sethy did the same with a multi-word answer when she clued IGOTIT with the delightful “Catch phrase?”

Brendan Emmett Quigley covered up an ugly abbreviation answer — ECG — with a banger of a clue: “Ticker tape?”

As you can tell, misdirection clues are absolutely a favorite of mine.

I also can’t resist clues that get a little meta, playing with the format of cluing itself.

TYPO appears for a second time in today’s post, but the cluing is totally different, as Andrea Carla Michaels offered this meta treat: “Something annnoying about this clue but hopefully no others!”

And Francis Heaney went out of his way to word to clue the word AUTOMOBILES in a manner you’ll never forget: “‘Humorous People in ____ Acquiring Caffeinated Drinks’ (Jerry Seinfeld series whose name I might be remembering incorrectly)”

Using multiple examples in a clue not only shows off the variety of definitions some words have, but allows constructors to juxtapose these meanings in entertaining fashion.

Janie Smulyan deftly shows off this technique by cluing SPELLS “Some are dry, some are magic.” Concise and clever.

And although this Hannah Slovut offering isn’t as concise as the others in this clue for SEE, it’s still a terrific example of employing multiple uses of a word: “Different tense of ‘saw’ that may precede ‘saw'”

I know some crossword outlets aren’t fans of using clues that specifically reference each other — “With 21-Across, name of Charlie Chaplin film,” for instance — but other publishers are completely fine with this style of cluing.

Naturally, that allows constructors to have some fun making connections and using clues to reference each other.

Hannah Slovut utilized this technique in a recent puzzle, cluing STYE as “Ailment that might be seen near 63-Across.” (63-Across was the exclamation MYEYE.)

There are all sorts of cluing styles we didn’t cover in this post — trivia clues, fill-in-the-blank, clues that use capitalization or pronunciation to mislead the solver — but hopefully we’ll get to them in a future blog post.

In the meantime, how about a few more misdirection clues for the road?

Brooke Husic made readers take a second look at a familiar word — “Surroundings?” — when she used it to clue SIEGES.

Catherine Cetta’s “Spot early on?” definitely sends you down the wrong path before you double-back and find the correct answer: PUP.

And we happily conclude with a clue from puzzle master Mike Shenk, who clearly had some fun with this one, cluing ANKLES with “They’re just over two feet.” Absolutely shameless.

What are some of your favorite crossword clues, fellow puzzlers and PuzzleNationers? Let us know in the comments section below! We’d love to hear from you.