I’m a puzzle guy, so naturally I’m always on the lookout for new puzzles, whether it’s in the newspaper, the bookstore, the Internet, or anywhere else I happen to be browsing.

But sometimes, you stumble upon a puzzle in the unlikeliest of places. Like a celebrity’s autobiography. 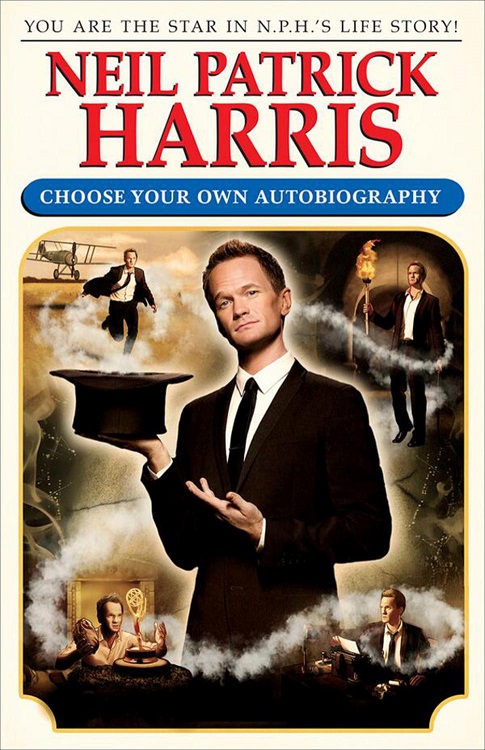 I recently got around to reading the autobiography of comedian, actor, magician, award-show host extraordinaire, and all-around champion of entertainment Neil Patrick Harris, and, as you’d expect from someone as creative as him, it was no ordinary affair. It’s written in the style of a Choose Your Own Adventure book, where you can make life decisions (as he did) and see where they lead!

Some lead to hilarious fake deaths, while others lead to genuine poignant moments from his life. We learn about his career, his discovery of magic, the peaks and valleys of his acting career, and his search for love, and it’s a great story. But he also includes messages from friends, drink recipes, and other hidden gems in the book, one of which was an unexpected cryptic crossword puzzle!

Now, I’ve made no secret of the fact that I’m hardly the strongest cryptic solver around, but I couldn’t resist tackling a surprise Neil Patrick Harris-themed puzzle. (Thankfully, I was able to call in a friend who’s really good with cryptics for the clues that stumped me.)

To Neil’s credit, there are some very clever clues here, in addition to more traditional cryptic clues like “Let show (4)” for RENT and “Symmetries halved and reversed produce a ceremony (5)” for EMMYS. And, as you’d expect, most or all of them apply to events in his life, so you have to read the book to have any chance of solving this one.

Let’s look at a few of my favorites:

Once you have your 24 answer words, it’s time to fill in the words Framework-style. Quite helpfully, there are several places in the grid where only one word fits, due to word length, which offers the solver several points of access.

However, only 23 of those words will fit in the grid, allowing for an alternate solve for the answers RENT and PENN. But there’s only one way to place the other answers so that the shaded squares spell out a ten-letter word that has a special meaning for clever and attentive readers, a code word Neil suggests as a sign of kinship with the reader.

I debated whether to share the word here, but I don’t want to deprive others of the joy of solving a surprisingly tough and enjoyable puzzle lurking inside an already fun read.