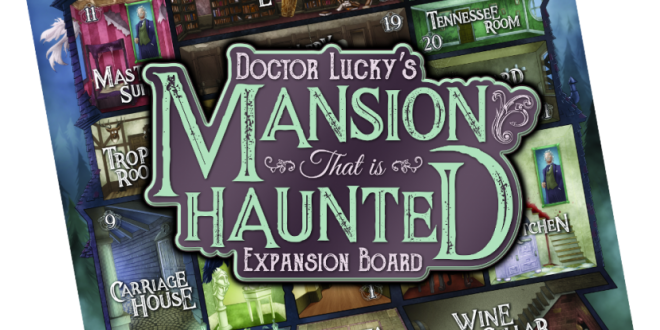 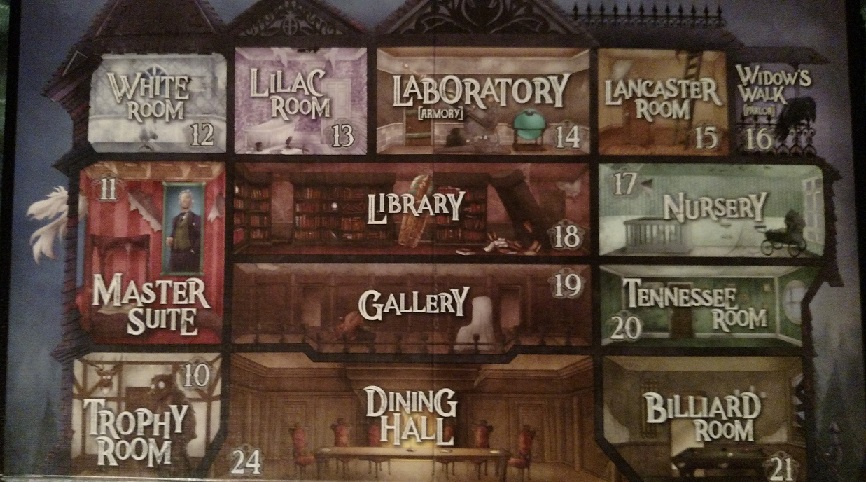 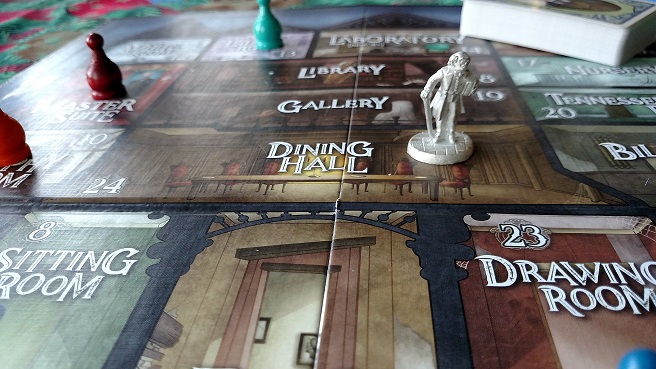 For as long as Cheapass Games has been around, they’ve been synonymous with the character Dr. Lucky. More specifically, the many, MANY times players have tried to help Dr. Lucky shuffle off the mortal coil, since the very first game produced by Cheapass Games was the award-winning Kill Doctor Lucky.

Although years have passed and rules have changed, people are still trying to kill that oddly fortunate fellow, and today, we review two puzzly games that will give you ample opportunity to try your luck at a touch of murder at Lucky Mansion.

In the Get Lucky card game, an adaptation of the original board game, two and six players are pitted against each other at a most peculiar dinner party. (The fact that everyone is trying to dispatch the host is what makes it so peculiar.)

Each player has two characters to work with. In each round, you have the choice of drawing a card, playing a card, swapping a character, or trying to kill Dr. Lucky. Drawing cards gives you the chance to acquire weapons, motives, or opportunities, all in the hopes better equipping you to commit the perfect crime.

Each card has a score that links up with one of the game’s fifteen characters. So if you’re playing Winstead Beadle (who has the number 5 on his card), any motive, weapon, or opportunity card with a 5 on it is doubly valuable to you, making it more likely that your attempt to kill Dr. Lucky will succeed!

As Dr. Lucky circulates among the various guests, you and your fellow players will continuously try to take his life, like Wile E. Coyote pursuing the Road Runner over and over again. The other players may thwart your efforts by sacrificing cards to foil your murder attempt.

This balance of active and defensive play creates a game of both strategy and opportunity, making it a terrific step up from deductive games like Clue. And the game is designed to be played in 20 minutes,

Of course, if you’re looking for something a bit more involved, you’re welcome to give the Deluxe Anniversary Edition of Kill Doctor Lucky a try.

Now, as you might expect, there are similarities between the card game Get Lucky and the board game Kill Doctor Lucky. The goal, for instance, is the same.

But in Kill Doctor Lucky, murder is a private matter. You have to eliminate Dr. Lucky without any player in sight. Another player can’t be in the same room as you and the doctor when you make your attempt, and being able to observe the murder from another room also foils your attempt. (There are even variant rules that allow for Dr. Lucky’s dog or cat to impact gameplay.) The beautiful fold-out game board really helps bring this mechanic to life.

Each turn, you can move and you can act. Moving is simply traveling throughout Lucky Mansion, whereas acting either involves drawing cards OR attempting to kill Doctor Lucky.

To make things even more challenging, Doctor Lucky moves after every turn, so you have to factor that into your strategy. (Some players stay where they are, allowing the good doctor to come directly to them.)

Kill Doctor Lucky builds on the streamlined rules of the card game, offering many more options for places to encounter the Doctor, greater challenge in offing the doctor, and deeper strategy in isolating Dr. Lucky and keeping lookyloos away. Plus, each failed attempt to kill him can help you later on, providing additional “reasons” for wanting the doc dead.

And in terms of presentation, the artwork is topnotch, adding so much to the ambiance and style of the game. It feels like an old-timey murder mystery full of colorful characters, except one where the murder hasn’t happened yet.

In both games, terrific gameplay is enhanced by hilarious cards (complete with snarky world-building and outrageous asides) that are all too appropriate for the macabre task at hand. Get Lucky and Kill Doctor Lucky are terrific ways to add a subversive bit of fun to your game night.