The puzzle world is a relatively small one, and sadly, over the last month or so, it has grown a bit smaller.

I know some of you are already aware of the passing of Raymond Smullyan, the mathematician and puzzlesmith who popularized, among other things, the logic puzzle known as “The Lady or the Tiger?”

What you may not know is that a long-time member of the Penny Dell Puzzles family also passed recently.

A Yale-educated lawyer, David Lindsey was a fixture at Penny Press for decades, but his influence on the world of puzzles extends back years before he joined that company.

The earliest editing credit I’ve been able to track down is a 1967 edition of Webster’s Crosswords, published by Merit, which is also one of the few publications where I’ve seen him credited under his real name. So, if you’ve ever enjoyed a puzzle credited to Dee Stewart or George Spelvin (a famous pseudonym from the American theater), you have David to thank for it.

Penny Press president Peter Kanter associates David with puzzles as far back as the early 70s, though it’s unclear when exactly David began working for Penny Press on a part-time basis. (I suspect it would have been around the time the Merit brand was acquired by Penny Press.) 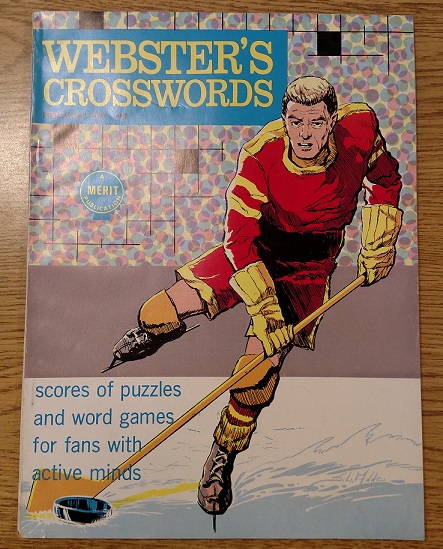 He signed on full-time in 1987, and served as a puzzle editor, though perhaps his greatest legacy was the role he played in establishing its acquisitions department, the route by which outside puzzle creators and constructors could have their work featured in Penny Press magazines. David set quality standards for the puzzles that would be accepted, and served as the gatekeeper for all sorts of new puzzles.

He is also credited with creating or popularizing puzzles that are synonymous with Penny Dell Puzzles to this day. Secret Word, Chess Words, Chess Solitaire, Weaver Words, Diagramless Fill-In, Word Games Puzzles, and more flourished under his watchful eye and exacting attention to detail.

He would work the entire editing process, from concept to the final tweaks. At one point, David introduced a new type of puzzle in every issue of Variety Puzzles and Games, a Herculean feat.

His “Lindsey Lessons” — meetings where he would introduce and explain the nuances of puzzles — were invaluable to fellow editors, taking challenging puzzles like Word Math and making them more accessible, stripping away the mysteries that might have made them daunting to those who were unfamiliar with that sort of puzzling.

He even participated in a potluck-style puzzle group outside the office that would create and workshop new puzzle ideas together.

But when I asked people about David, it wasn’t his work in puzzles that left a lasting influence on them. It was his strong sense of self, a quiet confidence that he was who he was, uncompromisingly. He was at home with his choices, his quirks, and his beliefs.

There were stories about the injured coyote he cared for, stories about him jogging shirtless in winter, and stories about the snacks he brought into the office, the fruits of his many experiments with the food dehydrator given to him by members of a cardiac rehab exercise class he conducted.

David said, “I never eat sugar”, but curiously enough, he was always first in line when cookies or cakes were about.

He was never without one of his signature bowties, and he actually taught Peter Kanter how to tie one. (To this day, Kanter still uses the instructions David gave him, on the rare occasion he has to tie a bowtie.)

He was a pillar of his community, singing in a men’s chorus, participating in Daffodil Days events for the American Cancer Society, contributing recordings to some of the first Reading for the Blind programs, and even doing the Penguin Plunge well into his 80s to raise money for the Special Olympics.

It was my privilege to work with David for over a decade, and I’ll miss him very much. And I know that I’m far from the only one who feels that way.