Even the best designed games need a little sprucing up from time to time. This is especially true of logic/deduction games, where after a while, it can feel like you’ve seen every trick either the game or the other players can offer.

And there are very few game companies that consistently deliver great expansions. It’s a brutal tightrope to walk; you have to add to the established game in an interesting or fresh way, but without breaking the rules, introducing problems that players won’t know how to handle mechanically, or betraying in some manner the spirit of the original game.

For the team at Looney Labs, though, creating an expansion pack seems like another day at the office. We’ve reviewed expansion packs in the past for Fluxx (Fluxx Dice), Just Desserts (Just Coffee/Better with Bacon), and Star Trek Fluxx (the Bridge Expansion), and each one revitalizes the game and adds delightful new wrinkles without hampering any of the qualities that made the original game such a treat.

Today, we’re looking at a new expansion pack for one of the company’s most immersive and challenging puzzle games: Zendo.

So, how does Zendo Expansion #2 affect the original? 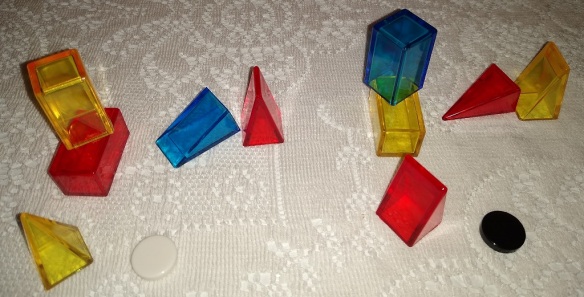 Zendo Expansion #2 is a ten-card deck of new secret rule cards that allow the moderator to create fresh challenges for the other players to unravel. The structures and arrangements may look the same, but players must reexamine what they think they know and observe to figure out the new secret rules.

Because, you see, the cards offer more than just the new rules. They demand greater cleverness from the moderator, in order to create designs that are fair for the players — not immediately obvious, but not impossible to discern either. It’s a difficult task for moderators.

And the challenge is even greater for players. After all, it’s not just about the shapes and how they interact, but all aspects of what the players see. Zendo Expansion #1 had cards where the rule involved the shape of the structure’s shadow. You could look at the pieces, the colors, how they’re placed, where they’re placed, how close, how far away, how many of each, and the shape of the shadow could NEVER occur to you.

[Here’s another sculpture that removes blue pieces as a possible
element in the secret rule. Have you figured it out yet?]

With one medium rule card and nine difficult rule cards (as opposed to the easy-to-difficult range of the first expansion pack), the game will only become more surprising and thoughtful from here.

These cards include rules about relationships between pieces, conditional rules (example: something that’s true of the sculpture if something else happens theoretically), and even rules regarding something that ISN’T happening in a particular sculpture. Players will have to wrack their brains and truly example both sculptures from every angle to puzzle out these new rules.

There are even decoy tags on certain cards, to make players think the card has more variables than there actually are! Diabolical!

Although I’m a moderator far more frequently than a player, I’m excited to try out both sides of these new rule cards. After all, with the base set and two expansions’ worth of cards, there’s no way I can remember ALL of the possible combinations available. I’m as likely to be outwitted and outpuzzled as the next player.

[One more chance. Here’s a much simplified version that DOESN’T
adhere to the secret rule. What can we learn from this one?]

And that’s the charm of Zendo. From a small gathering of pieces and rules, you can make practically any scenario you wish. Will the players figure it out first try, or will the moderator’s ability to reinvent their sculptures as needed be put to the ultimate test?

Zendo is at once the most collaborative and one of the most curiously devious puzzle-games in the Looney Labs catalog, and with this expansion pack, only the truly inventive and observant will thrive. What a treat.

[Zendo and the new Zendo Expansion #2 are available from Looney Labs, and the expansion pack is only $5!]

Oh, and if you figure out our secret rule for the post, we’ll send you a Zendo-themed prize!