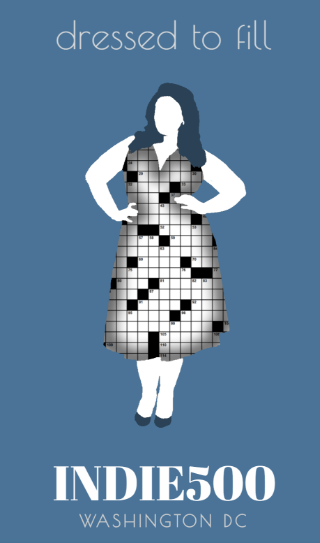 Three years ago, a new crossword tournament joined the ranks of the American Crossword Puzzle Tournament and Lollapuzzoola, immediately carving out its own niche in the puzzle world. The Indie 500 offered topnotch puzzles and a pie-fueled solving experience both live in Washington, D.C., and for solvers at home.

And it’s back! The fourth edition of The Indie 500 is happening on Saturday, June 2, and this year, the theme is “Dressed to Fill.”

This year’s tournament follows the same format as previous years: five preliminary puzzles of varying difficulty, plus a final puzzle for the top three scorers in both divisions.

Registration is open for the tournament, and if you can make it to D.C., it’s only $30 to compete! But don’t worry if you can’t, because solving from home is only $10!

Not only that, but there’s a fashion-themed meta suite that lets you name your own price, as well as access to the previous tournament bundles for $5 apiece. Those are super-affordable prices for some outstanding puzzles!

And, of course, there will be pie.

Will you be competing, or participating from home? Let us know in the comments below!

And today I’d like to return to the subject of optical illusions.

Yes, by popular demand, I’m talking about The Dress.

For those who haven’t heard — and wow, I’m sincerely amazed you haven’t by now — the above picture of a dress was uploaded to Tumblr not too long ago, and the Internet collectively lost its mind debating whether the dress was white and gold or black and blue.

Some people think that color blindness has something to do with the different opinions on the dress, but the answer is simpler than that.

I’ve written about optical illusions in the past, and this photo is another prime example. As for why people are seeing two different sets of colors, it’s all about visual context and how we interpret contrasting colors.

(This was also one of those cases where actually tilting your laptop screen could significantly change how the colors looked, since changing the angle of your screen altered how the image interacts with whatever light sources are nearby.)

I’ll give you another example. Check out this image from Gizmodo:

These green and blue spirals, contrasted against the pink and orange, appear to be different colors, but they are actually the exact same color. Our eyes are fooled into seeing them as different shades by the alternating stripes around them. (The “green” have orange contrast while the “blue” have pink.)

The differing interpretations of The Dress operate under the same principle.

Oh, and for the record, here’s the dress without the sunlight skewing the color scheme, as seen on Ellen DeGeneres’s show:

So which camp were you in, fellow puzzlers? White and gold or black and blue?