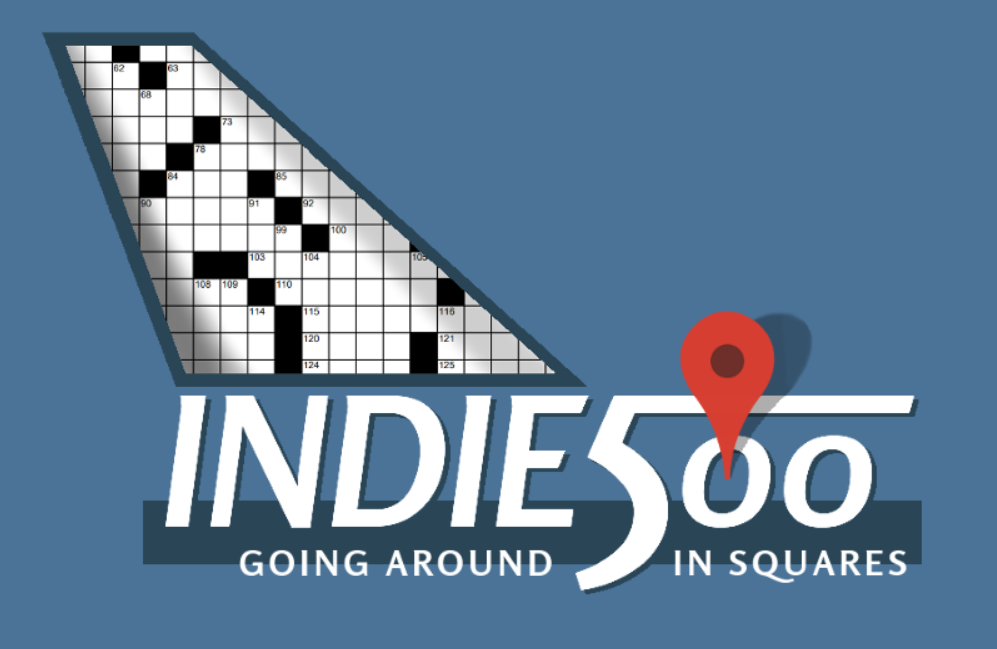 June 1 marked the fifth annual Indie 500 Crossword Tournament, hosted in Washington, D.C., by constructors Erik Agard, Neville Fogarty, Andy Kravis, Peter Broda, and Angela Olsen Halsted. The first tournament had a racing theme, the second had a prom theme, the third had a time theme, the fourth had a fashion theme, and this year was travel-themed!

While I couldn’t attend the tournament, I did download the tournament puzzles, and last weekend I finally had the opportunity to sit down and tackle them. And today, I thought I’d offer my thoughts on those puzzles, for any interested PuzzleNationers who might be considering participating in the event in the future.

Before the official tournament puzzles start, there’s a warm-up puzzle, a 15x grid entitled “Getting There” by Neville Fogarty. The hook is simple and accessible — forms of transportation found inside locations, like TRAIN in MOUNT RAINIER or BIKE in NAIROBI KENYA — and with easy fill and some fun cluing, this is the perfect puzzle to get your motor running for the tournament to come.

Interesting grid entries included I’M SORRY, AMNIO, and ONE PAGE. My favorite clue was “Org. with Magic and Wizards” for NBA.

Photo by rawpixel.com on Pexels.com

#1 Is There a Fee for Emotional Baggage? by Angela Olsen Halsted

The tournament opens with this smooth-solving entry by the ever-reliable Halsted. Loaded with shameless puns based on locations like MYSEOULMATE and OTTAWATCHIT, this fun crossword definitely builds any solver’s confidence for the challenges to come. The effortless fill is bolstered by great references in the cluing, citing The West Wing, The Lion King, Creed, and Shonda Rhimes. I blasted through this one quicker than expected, but I still really enjoyed it.

Interesting grid entries included CARDI B, STANDBY, ACELA, and ADONIS. My favorite clues were “Potables actually first brewed in England, for short” for IPAS and “Gosling of the ‘Hey Girl’ meme” for RYAN.

The second puzzle of the tournament was an ambitious 17x grid with lots of long entries and solid fill overall, tied together by theme of airplane/flight terms hidden in longer entries (like TAKEOFF in TAKE OFFENSE and FLIGHT in BEAM OF LIGHT). Overall, this was a very impressive grid, though not much harder than the first puzzle, making for another fairly quick solve.

Interesting grid entries included OVER HERE, ERASABLE, FIRE SALE, FAT CAT, PEBBLES, and the delightfully slangy HATERADE. My favorite clues were “Displays of pride” for PARADES and “Take up again, say” for REHEM.

Photo by Pixabay on Pexels.com

Puzzle 3 was the first genuinely challenging puzzle of the tournament, a considerable jump in difficulty from the first two, and it takes the “word hidden in a longer phrase” gimmick to a whole new level.

The built-in ATM graphics in various grid boxes represent different currencies concealed in the theme entries; even across and down entries that share an ATM have different currencies, which is an immensely clever trick and a feat of grid construction I’ve never seen before. For instance, one ATM represents WON in SMALLWONDER and DINAR in ORDINARY.

This was easily my favorite puzzle of the tournament, and one of Kravis’s most diabolical and well-designed creations. Nicely done!

The toughest puzzle of the tournament for me (except for the final), this was a definite struggle, despite a well-constructed grid and a smart hook. The theme of this puzzle was a common phrase where the second half of the phrase was anagrammed into a form of transportation (for instance, MUSCLE STRAIN becomes MUSCLE TRAINS), tied together by the revealer TRANSFORMERS.

The anagram hook didn’t come to me quickly, making me work for every letter. Some of the clues as well, like “Japanese hog” for YAMAHA, took me an embarrassingly long time to unravel. Smulyan is clearly a devious constructor to watch out for.

Interesting grid entries included OPULENT, IBERIAN, ABSTAIN, and PIXAR. My favorite clues were “House payments” for ANTES and “Some are dry, some are magic” for SPELLS.

Photo by Craig Adderley on Pexels.com

#5 Four Plus One by Bryan Betancur

The final puzzle of regular tournament play, Puzzle 5 was an excellent closer, rewarding solvers with a breezy solve and a fun hook centered around travel phrases with circled bonus letters that spell out the word TIRE, a spare for the four circles/wheels already in the grid. (For example, STAR TREK becomes STAIR TREK and BUM A RIDE becomes BURMA RIDE, my personal favorite.)

A very tough closer designed to challenge the worthy top tournament solvers, Puzzle 6 was loaded with tough, long entries (AUDI DEALER didn’t occur to me for ages), and I would argue that TO A T (rather than TO A TEE) is questionable at best.

Interesting grid entries included ONOMATOPOEIA, SAFARI, ACHOO, HOTEP, and HOOPLA. My favorite clue was “With 46-Across, comforting words” for THERE. (Since that clue WAS 46-Across, the actual answer is THERE THERE. Fun stuff.)

Although that was the end of the tournament proper, I’d be remiss if I didn’t mention one of the bonus puzzles in the packet.

The Tiebreaker puzzle by Erik Agard was super tough, but clever and impressive, considering that the grid was constructed in the shape of a 5 (as this was the fifth edition of the tournament.)

Layering lots of long entries like SPLIT A CAB, I WANT OUT, DISGRACE, MAGNETRON, LPGA TOUR, and LESOTHO, it was a brain-melter of a finale to a tournament that swung between easy and challenging and back again.

Overall, this was the most inventive edition of the Indie 500 yet. The puzzles mingled the creativity of the previous four tournaments with particularly strong grid design, cunning clues, and some fun takes on classic crossword conventions.

The constructors made the most of the travel theme, incorporating anagrams, hidden answers, and the inspired ATM gimmick in puzzle 3. All in all, this was an engaging and worthy series of puzzles, designed to delight and challenge solvers in equal measure.

I look forward to its return next year, and hopefully some of you will join me in accepting the Indie 500 challenge!