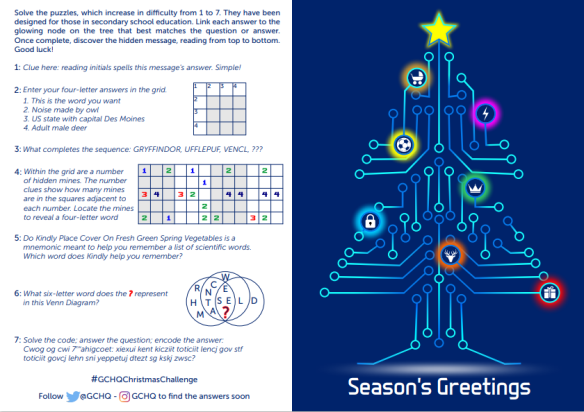 Every year, one of the puzzliest challenges many solvers will encounter all year descends upon the world, as the GCHQ issue their Christmas card.

The GCHQ — or Government Communications Headquarters — provides security and intelligence services for the British government. Back when they were known as GC&CS — Government Code and Cypher School — they were responsible for funding Bletchley Park and its successes cracking the German “Enigma” code during World War II.

This year’s Christmas card was directed toward solvers with a secondary school education (essentially solvers age 11 and up), and was less complicated than offerings in previous years, but still offered an engaging challenge.

Here’s the link in case you’d like to try it for yourself.

Last chance before we walk through the solution!

Clue number one is an easy one, as you simply read the first letter of each word in the message. Your solution is CHRISTMAS.

And the letters in THIS are highlighted in the grid, so the solution is THIS.

Clue number four is a Blackout! or Minesweeper-style puzzle where you deduce the location of bombs in the grid according to numbers in the neighboring squares. Once you’re marked off each of the bombs, the remaining spaces form letters and spell out a word. Your solution is SAFE.

Clue number five is a mnemonic device, and solvers must puzzle out what chain of related words is represented by the device. In this case, the major taxonomic ranks that are used to organize related living things are represented, and the word Kindly points toward the second word in the taxonomic ranks, so your solution is Kingdom.

Clue number six has three overlapping circles, each with letters inside, and you have to figure out not only what the words are, but what missing six-letter word would sit in the middle of this Venn diagram.

I found this to be the hardest puzzle in the card by far, as I tried and failed in numerous attempts to anagram the letters into recognizable words. Finally, I decoded the shortest word — LEEDS — only because I remembered that this is a British organization and I have friends who live in Leeds.

Leeds led me to unraveling the other two answers — MANCHESTER and NEWCASTLE — and my meager knowledge of European football provided the missing six-letter word. The solution is UNITED.

Clue number seven is a simple cryptogram, and is quickly decoded to read “This is the 7th question: people born between nineteen forty-six and nineteen sixty-four are commonly known as baby what?”

The solution appears to be BOOMERS, but there is an additional instruction to follow after decoding the message, and you must encode the answer. Following the same letter-substitution rule, BOOMERS becomes KEEPING, and that is your solution. 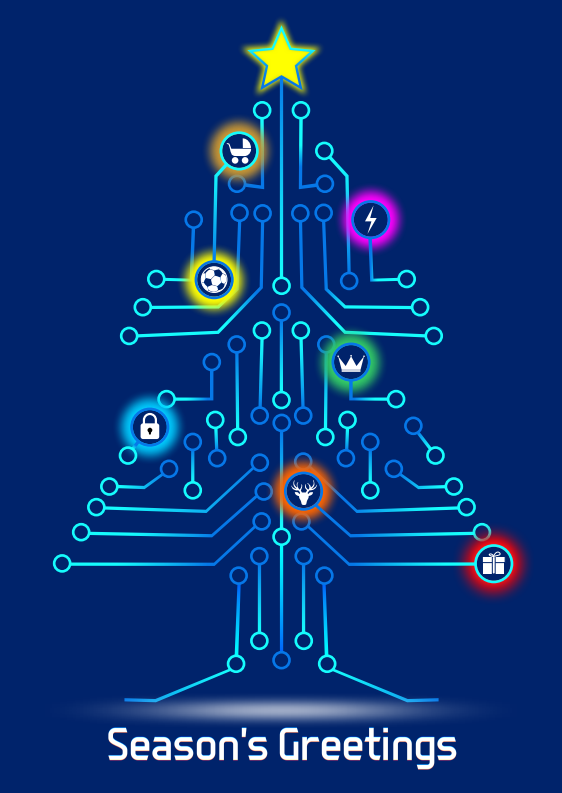 Now each word must be placed in order on the tree for your message to properly read out.

And the message is revealed, celebrating the mission of the GCHQ itself: Keeping the United Kingdom Safe This Christmas.

Did you unravel this festive puzzly challenge, fellow PuzzleNationers? Let us know in the comments section below! We’d love to hear from you.

Treat yourself to some delightful deals on puzzles. You can find them on the Home Screen for Daily POP Crosswords and Daily POP Word Search! Check them out!

Last year, one of the toughest puzzles I encountered all year was the GCHQ Christmas Card.

The GCHQ — Government Communications Headquarters — provides security and intelligence services for the British government. Back when they were known as GC&CS — Government Code and Cypher School — they were responsible for funding Bletchley Park and its successes cracking the German “Enigma” code during World War II.

And last Christmas, they released a puzzly Christmas card that challenged the staunchest puzzlers, with over 600,000 submissions, but only 3 successful solutions!

This puzzle is the first step in a larger event that the GCHQ expects will take MONTHS to solve. (Their official due date for submissions is February 28, 2017!)

The big change here is that instead of a series of webpages available free to the public, they’re releasing this puzzly master challenge as a book containing over 140 codes and puzzles.

But it’s for a good cause, as “all GCHQ’s proceeds from sales of the book will be donated to the Heads Together campaign, supported by HRH The Duchess of Cambridge, who wrote the foreword for The GCHQ Puzzle Book.”

I have always been immensely proud of my grandmother, Valerie Glassborow, who worked at Bletchley Park during the Second World War. She and her twin sister, Mary, served with thousands of other young women as part of the great Allied effort to break enemy codes. They hardly ever talked about their wartime service, but we now know just how important the men and women of Bletchley Park were, as they tackled some of the hardest problems facing the country.

In a new century, their successors at GCHQ continue this intellectual tradition. Like their Bletchley predecessors, they have become well known for valuing and understanding the importance of mental wellbeing. This is so important when dealing with such discretion and the pressure which comes with this.

William, Harry and I are very grateful that this book is supporting our Heads Together Campaign. I hope it will not only amuse and challenge readers, but help to promote an open discussion of mental health problems, which can affect anyone, regardless of age or background. Together, we are aiming to change the national conversation around mental health from stigma and fear to openness and understanding. Those who buy this book and support the Heads Together campaign will be playing a part in helping people get the important mental health care they deserve.

Puzzles and charitable works: a perfect holiday match, to be sure.

For US shoppers, the book is available as a Kindle ebook through Amazon.com, but if you want a paperback copy, you’re better off ordering it from Amazon.co.uk. With shipping and conversion, it still cost me less than $20.