We live in a data-driven world these days. Everything is quantified, analyzed, charted, and graphed. Your social media use alone is an absolute treasure trove of data that tells businesses all sorts of information about your activities, spending habits, and more.

So it should come as no surprise to you that the world of crosswords is no different. In recent years, we have been able to analyze decades of crosswords like never before, drawing important conclusions and uncovering trends both intriguing and shocking.

Back in 2016, the data analysis of programmer Saul Pwanson and constructor Ben Tausig uncovered a pattern of unlikely repeated entries in the USA Today and Universal crosswords, both of which were then edited by Timothy Parker. Eventually, more than 65 puzzles were determined to feature “suspicious instances of repetition” with previously published puzzles in the New York Times and other outlets, with hundreds more showing some level of repetition.

This led to Parker’s removal from both the USA Today and Universal crosswords.

But the impact of data analysis in crosswords doesn’t stop there. In 2018, Erik Agard compiled stats on how often the work of female constructors appeared in the major crossword outlets across the first four months of that year. It was an eye-opening piece about gender disparity among published constructors, backed up by smart research.

And there has been a greater push for inclusion on the construction side of crosswords. Back in March, at the urging of constructor Rebecca Falcon, several outlets participated in Women’s March, a concentrated effort in the puzzle community to support, foster, and cultivate more minority voices in crosswords.

(It comes as no surprise that two of the voices encouraging female puzzle creators are Erik Agard and David Steinberg, both of whom stepped up massively in the wake of the Timothy Parker scandal and have been advocates for greater inclusiveness in crosswords.)

[The list of all of the female constructors involved in Universal’s Women’s March project.]

This does raise the question, however, of inclusiveness when it comes to cluing and crossword entries.

And that question has been tackled quite brilliantly by Michelle McGhee in an article for The Pudding.

Striving to “better understand who is being referenced in crossword puzzles,” McGhee made a strong point about the influence crosswords have as a reflection on society:

Crosswords tell us something about what we think is worth knowing. A puzzle that subtly promotes the idea that white men are the standard, the people everyone should know about, is a problem for all of us (yes, even the white men).

A less homogenous puzzle would be an opportunity for many solvers to expand their worldviews. But more importantly, if you’re a solver like me, it’s meaningful to see yourself and your experiences in the puzzle, especially if they are often unseen or underappreciated. When I see black women engineers, or powerful athletes, or queer couples centered in a puzzle, it makes me feel seen and significant. It’s a reminder that I can be the standard, not just the deviant.

And she put the data to work to prove her point.

Sampling tens of thousands of crosswords from Saul Pwanson’s puzzle database, she and her fellow researchers sorted people mentioned in crossword clues and used as crossword answers by race and gender according to US Census categories.

And their conclusion, sadly, was hardly unexpected:

We recognize that this is an imperfect method, but it does not change our finding: crossword puzzles are dominated by men of European descent, reserving little space for everyone else.

Not only did they chart the percentages of representation, but they also created charts illustrating the most commonly referenced people in crossword answers in the New York Times puzzle.

The goal? They wanted to quantify the concept of “common knowledge” in crosswords in the hopes of redefining it in a way that better reflects a true common knowledge, one that represents everyone.

I’m only scratching the surface of this article, which is a fascinating exploration of the history of crosswords, what they say about society, and what they COULD say about society. I encourage you wholeheartedly to read McGhee’s full piece here.

It’s the sort of journalism, commentary, and data analysis that helps push a problematic aspect of crosswords into the spotlight and keep it there. Yes, there have been great steps forward for representation in crosswords, both within the puzzles and in the realm of constructors, but we can do better. We must do better.

And work by folks like Michelle McGhee and her graph-savvy data miners is a valuable part of the process. 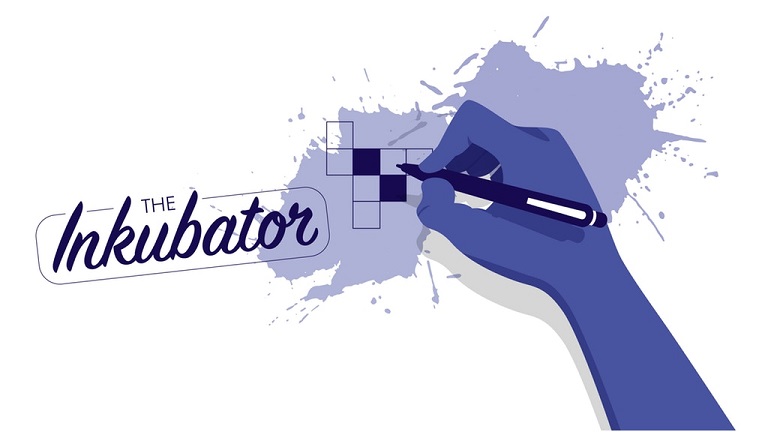 Long-time readers know that one of my favorite things about the blog is that I can use it to spread the word about different worthwhile projects.

In the past, we’ve proudly provided a signal boost to folks adapting popular games for the visually impaired, game shops that could use more support, and campaigns to encourage and recruit constructors from more diverse backgrounds.

So when I heard about the Kickstarter campaign for The Inkubator, I knew it was another worthwhile project to put a spotlight on.

The brainchild of crossword constructors Tracy Bennett and Laura Braunstein, The Inkubator is a by-email subscription puzzle service where 100% of the puzzles will be constructed by women. (It follows in the footsteps of the wonderful Women of Letters project from last year.)

From the public announcement:

The editors invite women — cis women, trans women, and woman-aligned constructors — to submit themed and themeless crosswords or queries in any stage of development. (If you think you may be eligible to construct, but you’re not sure, you’re eligible to construct. Still not sure? Ask us!) If you’re new to constructing, we’ll make every effort to connect you with a collaborator.

Yes, The Inkubator is not only a publishing outlet for anyone who identifies as female, but it is intended to help and encourage new and inexperienced constructors, providing resources and advice in the hopes of publishing more women.

The Kickstarter has only been up for two days, and they’ve already passed their initial funding goal, proving that there is not only a market for women-driven puzzles, but a lot of support for female constructors as well. They’re currently brainstorming stretch goals for the project right now!

I wish The Inkubator not only luck, but success, and I can’t wait to see what new voices the project helps bring to the fore.

For more details or to donate to The Inkubator, check out the Kickstarter page for the project here.