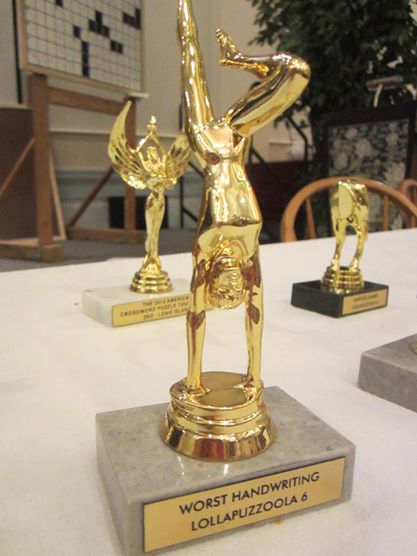 The twelfth edition of Lollapuzzoola arrived, as expected, on a Saturday in August, and it did not disappoint. The largest annual crossword tournament in New York (and the second largest in the world) has become not only one of the highlights of the puzzle calendar, but an institution at this point.

I was not in attendance, but I did sign up for the Solve At Home puzzle packet. Last weekend, I finally had a chance to sit down and try my hands at this year’s tournament puzzles, and I was not disappointed. Lollapuzzoola continues to push the envelope with inventive themes and unique spins on how to bring crosswords to life.

This year’s theme was “Be Part of the Future!” so every puzzle had something to do with time periods or the future in general, and the constructors were clearly inspired in all sorts of ways. Let’s take a look at what they came up with.

This was complicated by the fact that several of the clues were the same for multiple entries. For example, the clue to 1 Across for both grids was “Popular Nabisco cracker brand.” The grids themselves also made for a tough solve, since there were several sections only connected by a single word, so you had fewer ins to tell you which answer applied.

Overall, this was a tough but fair way to open up the tournament, despite a few oddball entries (like YES OR NO).

Interesting grid entries included SOFT TACO, SUDOKU, ZYGOTE, and RAGTIME, and my favorite clues were “Pace rival” for ORTEGA and “Actress Gadot who has done lots of great things, but listing them isn’t going to help you get the answer (which you’ve probably already written in anyway, so really what’s the point)” for GAL.

The competition puzzles kicked off with this gem, a terrific 15x opener that properly set the tone for the rest of the day’s puzzles with a fun hook and solid fill. The themed entries all involved verbs where the tense had changed from the traditional phrasing, so TURKEYSHOOT became TURKEYSHOT (“Picture of a Thanksgiving entree?”) and NANCYDREW became NANCYDRAW (“Command to Mrs. Reagan to use a crayon?”).

Packing 6 themed entries into a relatively small grid didn’t hamper the grid construction at all, making for relatively little crosswordese and a smooth solve overall.

Interesting grid entries included STONE COLD, BYZANTINE, and BYRDS, and my favorite clue was “Prepares to sing an anthem” for RISES.

The difficulty increased with Puzzle 2, as Zawistowski tested solvers with an enjoyable swapping puzzle. In this puzzle, the theme entries each mentioned a unit of time, but it was swapped with another theme entry’s unit of time. So GLORYDAYS and MODELYEAR became GLORYYEAR and MODELDAYS. These unfamiliar phrases, when paired with straight-forward cluing, made for a solve that keeps you on your toes.

When paired with some tough fill — entries like OPCIT, SYLPH, and UNAGI — you’ve got a recipe for a puzzle that probably slowed a few puzzlers down in competition.

Interesting grid entries included EL CAPITAN, LAYLA, ON A BREAK, and MARILU (plus a nod to the absolutely horrible B-movie THE CAR), and my favorite clues were “Ran in the rain, say” for BLED and “Many a Comic-Con event” for PANEL.

Puzzle 3: “If I Could Turn Back Time” by Paolo Pasco

At the halfway point for the regular tournament puzzles, our constructor took our time gimmick into the future in a delightfully fun way. In Puzzle 3, all of the celebrity names in the themed entries really needed the revealer (FOUNTAIN OF YOUTH), because they’d aged in punny fashion. JULIA CHILD became JULIA ADOLESCENT, HARVEY MILK became HARVEY CHEESE, JOEY FATONE became KANGAROO FATONE, and so on.

Six themed entries plus a revealer made for a very busy grid, but the fill complemented the puzzle nicely, making for one of the quickest and smoothest solves of the day.

Interesting grid entries included XANAX, FIJI, THE CURE, STIMULI, and OH HELL, and my favorite clues were “Musical key dreaded by racecar drivers?” for AFLAT, “Redding who made lots of green singing the blues” for OTIS, and the pairing of “Length of your friend’s one-man version of ‘Cats,’ seemingly” for EONS and “Casual answer to ‘Do you want to see my one-man version of ‘Cats’?” for NAH.

Although Puzzle 3 was the most fun to solve, Puzzle 4 was my favorite when it came to the grid construction and overall concept for the puzzle. You see, many of the across entries had letters missing, letters that had been shoehorned into their clues (and fit between the other letters in broken grid boxes).

So while DENALI was spelled DEALI in the grid, the missing N found its way into the clue “Alaskan national park with many nice walls for climbers.” [Bolding is my own to highlight the added letter.]

The missing/repurposed letters spelled out three words reading down — WATCH, SUNDIAL, and CLOCK — all time-keeping artifacts hidden between the lines. A completed grid also reveals the instructions for the solver to follow, reading GATHER THE PIECES and FIX THE TIMELINES down the grid.

There’s a lot going on in this puzzle, and it all works together nicely. Not unlike some of the missing artifacts, when properly maintained.

Interesting grid entries included ECSTASY, LIME WEDGE, XBOX, AMBASSADOR, and IDEA MEN, and my favorite clues were “Group with an electrifying stage presence” for ACDC and “Gendered term that 26-Down should be able to improve upon” for IDEA MEN. (This was, naturally, 26-Down.)

[Image courtesy of The Verge.]

The regular tournament puzzles wrapped up with this 21×21 puzzle, which expanded on the time-shifting gimmick of puzzle 3 with movie titles as the themed entries. For instance, instead of SUNSET BOULEVARD, we had SUNRISE BOULEVARD. Instead of BOOGIE NIGHTS, it was BOOGIE AFTERNOONS. With entries shifting backward and forward in time, there was plenty of opportunity for some fun wordplay.

The larger grid allowed for longer themed entries and longer fill entries as well, adding loads of clever vocabulary to a well-constructed grid. This was the perfect capper to the traditional tournament puzzles, making for a fair and engaging solve to close out the day. 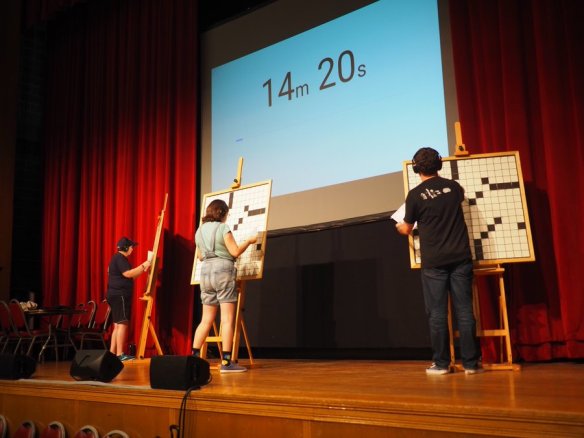 With a pair of 10-letter entries mentioning time as anchors for the puzzle — FINEST HOUR and MINUTE MAID — Mike delivered a tight grid with some terrific filler entries and impressive stacks of 7- and 8-letter words in the corners.

This was a final puzzle worthy of a tournament built around clever hooks, top-notch construction, and delightful cluing, and it delivered in spades. I certainly had to jump all over the grid to find places to get started, whereas the top solvers no doubt powered through with staggering speed.

Interesting grid entries included WAR DANCE, BEGUILES, YULETIDE, GROUP HUG, and AVALON, and my favorite clues were “Road trips to the big game?” for SAFARIS and “They may send your spouse to another room” for SNORES.

There was also a tiebreaker themeless by Brian Cimmet which was a quick and satisfying solve, and seemed to be going for the record for clue length with examples like:

The puzzles at Lollapuzzoola always impress, and this year was no exception. The grids were tight, there was little crosswordese, and the creative themes and puzzle mechanics — from hiding entry letters in clues to switching verb tenses and ages on the solver — ensured that not only would fun be had by all, but that the unique puzzles would linger in your memory.