Of all the names I expected to see pop up in puzzles in the new year, Timothy Parker wasn’t one of them.

For the uninitiated, Timothy Parker was the crossword editor for Universal’s syndicated puzzle and USA Today, both of which are owned by Universal Uclick. He touted himself as “America’s most solved crossword constructor.”

And almost four years ago, devastating accusations of plagiarism emerged regarding Parker’s conduct as a crossword editor. In a story broken by FiveThirtyEight.com, more than 60 puzzles were flagged for suspicious patterns of repeated entries, grids, and clues with previously published puzzles in The New York Times and other outlets. (Hundreds more showed some level of repetition.) 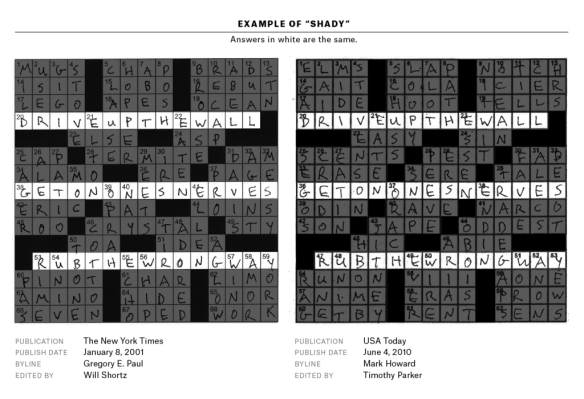 Additionally, a pattern of puzzles re-published under fake names or Parker’s name — rather than the name of the actual constructor who submitted the puzzle — also emerged.

In response — eventually — Universal Uclick released a statement that Parker “agreed to temporarily step back from any editorial role for both USA Today and Universal Crosswords.” The company later confirmed “some” of the allegations against Parker, and he was placed on a three-month leave of absence. He was soon removed as editor for the USA Today crossword. (The question of whether he was still employed by Universal Uclick would linger for years to come.)

After all the kerfuffle, Parker seemingly vanished. Except for the occasional joke on Twitter (or scathingly clever puzzle) referencing the story, that was it.

Until last week, that is.

In a promotional article on ExpoTor, Parker touted the strength and drawing power of his puzzle brand, taking the opportunity not only to toot his own horn, but to settle a few old scores.

Thirdly, be aware of snakes in the grass. As you get more and more successful, there will be more and more snakes slithering around trying to degrade your work in hopes of boosting theirs. This is common in any industry but is particularly relevant in my industry. I once had a D-list constructor for the Washington Post actually convince a gullible major newspaper reporter that one of my family-oriented crossword themes contained a secret “rape” joke.

This preposterous and asinine assumption was then actually written up by a reporter who stated I had “hidden” a rape joke in my crosswords. Having a G-rated, family-oriented brand for 21 years, this could have been devastating to the brand. But in my case, solvers who have known my work for years came to my rescue, and not only chastised the D-list constructor responsible for this nonsense but also the reporter as well. The article stayed up for a couple of hours and was quickly removed.

Both the supposed “D-list constructor” and the supposed “gullible major newspaper reporter” gladly identified themselves, pointing out that the article — you know, the one that was quickly removed back in 2017? — is still up on HuffPost today.

As for the secret rape joke, the grid contained the message “PSST HEY DOES THIS OLD RAG SMELL LIKE CHLOROFORM TO YOU.” The clue? “Run away from anyone who says this.”

Good lord. That’s about as overt a rape joke as I’ve ever seen that didn’t actually include the word “rape.”

Parker concludes the point with “The lesson learned here is rivals are rarely an asset to your brand.” You’d think a better lesson to learn — other than “don’t make offensive comments the centerpiece of your crossword” — would be “Don’t waste time in the middle of a promotional pitch grinding an ax that makes you look petty, incompetent, and insensitive.” 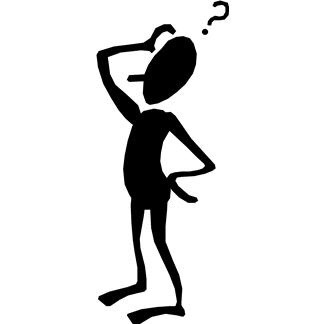 But I think it’s important to identify and call out problematic members of a community. Parker has never once admitted any fault or claimed any responsibility for the plagiarism scandal years ago. He has never apologized to the hardworking constructors whose work was stolen and/or reused without credit.

And for him to make such snide comments about another constructor — a well-respected one, I might add, with vastly higher standards for what constitutes a quality puzzle — reflects poorly on the entire field.

It’s been my privilege to meet and interact with dozens of top-flight constructors and puzzle editors. And the vast majority of them are good people, Evan included. They’re decent, creative, often brilliant, and frequently incredibly supportive of their fellow constructors.

Thankfully, USA Today and Universal Crosswords (part of Andrews McMeel Syndication) are both in more capable, reliable, and honest hands, being edited by Erik Agard and David Steinberg, respectively.

Here’s hoping the trend toward editors who support and respect both their fellow constructors and the crossword audience continues onward into 2020 and beyond. 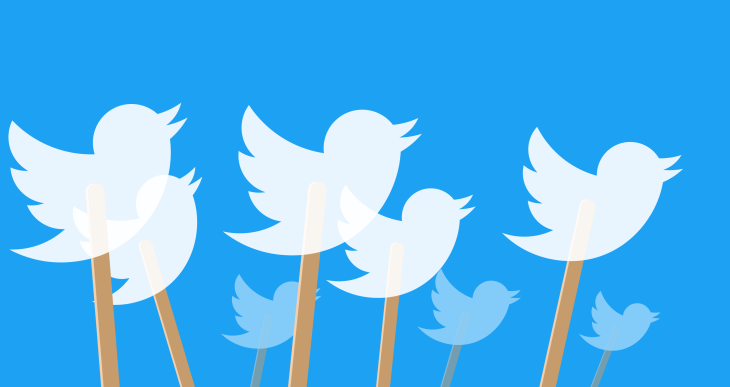 They’re a part of everyday life, appearing in newspapers, apps, puzzle books, mysteries, and more. That simple patterning of black and white squares, no matter where it appears, brings them to mind.

And yet, despite their ubiquity, they’re not always viewed as something for the everyman. Some consider them off-putting or intimidating, steeped in obscure cluing and peculiar verbiage intended to keep casual solvers out.

That mix of familiarity and unfamiliarity makes crosswords the perfect fodder for comedians. The crew at HuffPost proved this by compiling a list of humorous tweets focusing on crosswords. 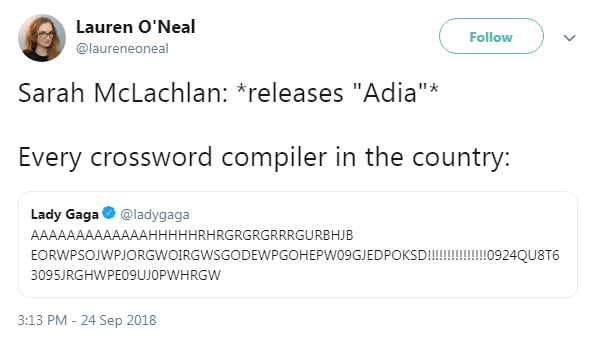 Or the difficulty some clues offer… 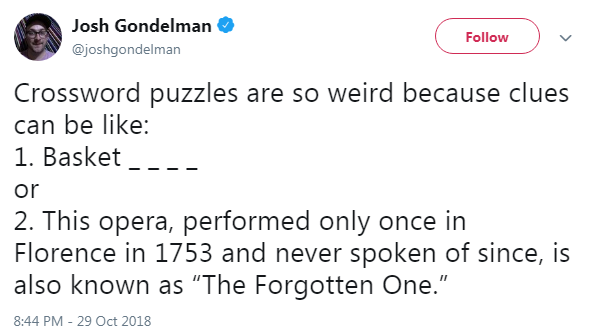 Or just the general difficulty of the puzzle…

But other tweets had fun with specific puzzles… 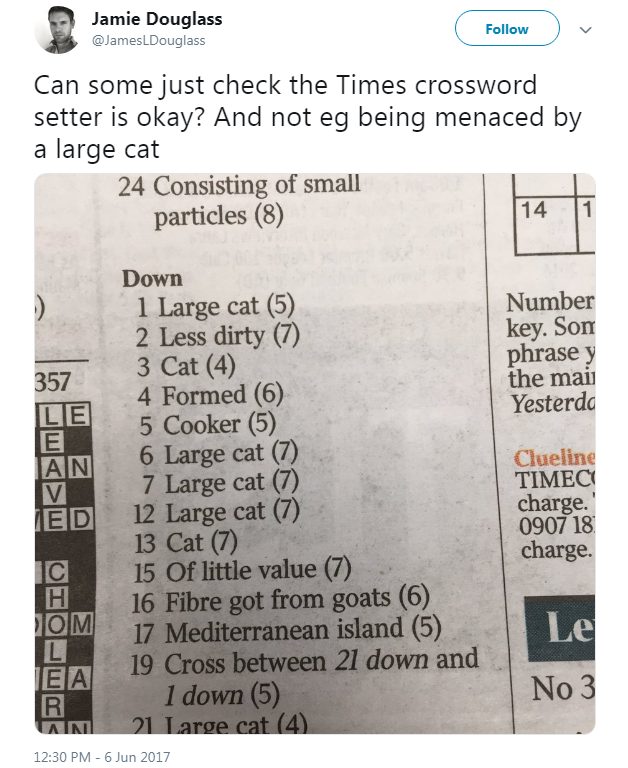 Or with the act of solving itself…

And, given how often wordplay finds its way into crosswords, it’s only appropriate to close out with a pun…

(That last one wasn’t in the HuffPost article. There’s plenty more puzzle humor out there, I just happened to stumbled across it yesterday before writing this post.)

Have you encountered any funny crossword-themed tweets recently? Let us know in the comments section below! (And be sure to follow us on Twitter, where we share little gems like these whenever we can.)