In honor of the 20th anniversary of Looney Labs this weekend, as well as the launch of the LooneyCon event today, we’re doing Follow-Up Friday a little differently today.

And so, welcome to another edition of 5 Questions, our recurring interview series where we reach out to puzzle constructors, game designers, writers, filmmakers, musicians, artists, and puzzle enthusiasts from all walks of life!

And I’m excited to welcome Andrew Looney as our latest 5 Questions interviewee! 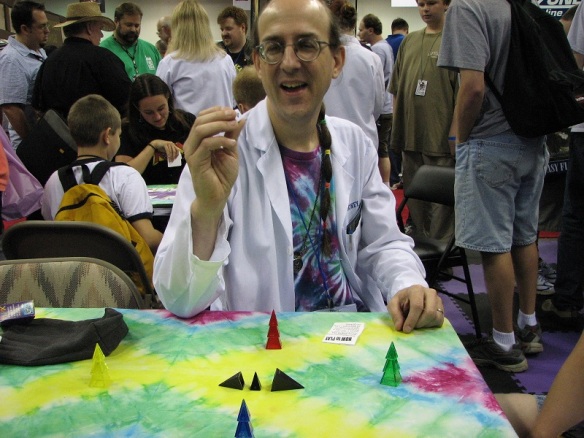 Andrew Looney is the chief game designer and co-founder of Looney Labs, a company specializing in games with serious replayability and dynamic rules that make every session a new experience. Founding the company in 1996 with his wife and partner-in-aerospace Kristin, he has gone on to launch such innovative games as Fluxx (and its many variations) and the Looney Pyramids series.

With two decades of experience in game design, he has presided over the growth of a major brand in games, one whose homegrown roots and values are still very much a part of the company’s fabric today.

Andrew was gracious enough to take some time out to talk to us in the days before LooneyCon, so without further ado, let’s get to the interview!

1. You’re celebrating twenty years of Looney Labs innovation and game design this month, and you’ve really cemented a reputation for fun games with a high replay value. How do you know when a game is right for your brand? And what role do you play in bringing these games to market?

I design everything we make myself. So I play a pretty big role. But the decision about what we publish next is not up to me… Ultimately, Kristin makes that call (although she gets input from everyone in the company and beyond).

When I feel that a game design is working, I’ll declare it ready for consideration, at which point it goes into the pool of possibilities. And some of my designs spend a lot of time waiting around in the pool before the company decides to publish them. In other cases, such as when I’m asked to create a game on a specific subject or when I come up with something particularly exciting, I have more deadline pressure.

But the ultimate test of when a game is ready is when everyone who plays it says, “This is great! Let’s play again!”

[The heart and soul of Looney Labs, Andrew and Kristin Looney.
Image courtesy of WindyconBlog.]

2. In the last year, Looney Labs released more games than ever before, with new licensing deals for Fluxx variations like Batman Fluxx and Firefly Fluxx, a Mad Libs game, and a wildly successful Kickstarter campaign for Pyramid Arcade, a relaunch of sorts for your Looney Pyramids series. How is Year 20 of Looney Labs different from Year 1, and what lessons have you learned along the way?

Wow, the difference is so vast. Twenty years ago we were still working at our day jobs in the aerospace industry, and learning how to start a company in our spare time. We’re still living in the same house, but the similarities end there. For many years, we ran the business out of our house, but now it’s just our house again, since our company has an 11-room office suite up the road, where our 8 full-time employees work.

Twenty years ago I had an idea for a wacky new card game… now there are almost 20 different versions of that game on the market, that have sold almost 3 million copies, and our games are in about 20 different languages.

Twenty years ago, we were struggling to find a way to manufacture the little plastic pyramids needed for our first game idea. Now we’re about to release an incredible boxed set featuring twenty different games I’ve invented since then for the pyramids.

Plus we have a bunch of other cool games I’ve invented along the way! It’s amazing, I never would have believed it. Where will we be in another twenty years? 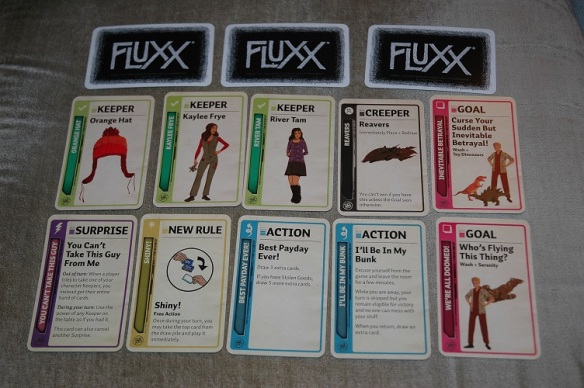 [Sample cards from Firefly Fluxx, one of many games
released under the Looney Labs banner.]

3. You’ve created games of your own and helped others bring their games to life. What puzzles and board games, either in game-play style or in the experience of producing them for sale, have most influenced you?

I grew up on the old-school classics, so they were my obvious first influences. Sorry was an early favorite. Another was a sixties board game about the Civil War called Battle Cry. I think my first real game design effort was a small-scale, simplified version of Battle Cry I made as a kid, small and fast enough to be played at a restaurant during a meal. (Sadly, I lost that prototype long ago.)

Another early effort was combining the missile and warhead cards from Nuclear War with the board game Risk. Another of my earliest efforts was coding my own text adventure games, like Colossal Cave, a game so inspirational to me that it also first motivated my desire to program computers.

Kristin and I were independently inspired, during our high school days, by the dice game Cosmic Wimpout. Indie game companies like them are everywhere now, but at the time it was a revelation that such companies could exist. We were particularly inspired by their occasional newsletter and their grassroots approach to marketing.

My favorite card game from way back is Hearts, and certain elements of that game still inspire me, most notably the way it has two paths to victory (avoid taking points vs. take all the points).

Lastly, Fluxx was inspired by a conceptual game engine called Nomic, in which the game rules are created by the players as the game is played. I found Nomic to be an interesting idea, but felt I could do better…

I think a lot of game designers, and indeed inventors of every stripe, are driven by this sort of inspiration, the desire to improve on what someone else did, to go even further with the idea.

4. What’s next for Andrew Looney and Looney Labs?

Well, the very next thing is LooneyCon, a micro-convention for fans of our games which we’re running this weekend! And as mentioned, this fall we’ll be releasing Pyramid Arcade, the culmination of everything we’ve been doing with the pyramid system these past 20 years.

Well, almost — it doesn’t include Zendo, which is too big to fit in Pyramid Arcade. But a new standalone edition of that game is something we’re planning separately, and we have some pretty neat ideas for that, too.

And I’ve got other exciting stuff planned for the future, including 3 completely new board games I’ve been developing for the past few years. Sorry, I can’t even tell you their names yet, let alone when they will be released, but I’m pretty satisfied by each one.

5. If you could give the readers, writers, aspiring game designers, and puzzle fans in the audience one piece of advice, what would it be?

“Don’t get left behind when the car goes into town.”

This is something my mom used to say (which I actually only learned at her funeral). It was a lesson she’d learned as a kid in rural Kansas, and it literally just refers to the limited availability of opportunities to catch a ride from the farm into town.

But I love it as a mantra for every fleeting chance we get at doing something fun. Pay attention to everything, because doors sometimes open and close quickly, and always say yes to travel and excitement!

Life is one big game, and whoever has the most fun wins!

A huge thank you to Andy for his time. Be sure to check out the Looney Labs site for updates on all things Looney, and check out their Facebook to keep up on all the activities for this weekend’s LooneyCon event, which starts today and runs through Sunday July 24, the actual 20th anniversary! I cannot wait to see what he has in store for us next!