When you hear the words “role-playing game,” what comes to mind? A bunch of nerds in a basement, hunched around a table debating weird and esoteric rules? Practitioners of the black arts, thumbing their noses at God and all that is natural? Or nothing at all? 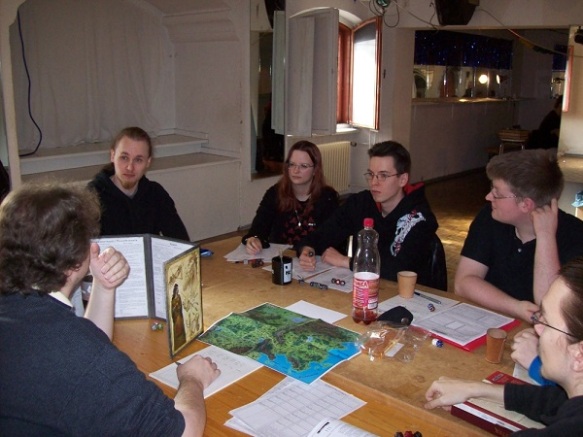 Some TV shows, like Community and Freaks & Geeks, have displayed role-playing games in a positive light, but for the most part, role-playing games in general, and Dungeons & Dragons in particular, have gotten a bad rap over the last few decades, maligned as (at best) a game for lonely friendless types and (at worst) a tool to corrupt children.

(This might sound ridiculous to many of you, but folks like Pat Robertson continue to talk about role-playing games as if they’re synonymous with demon worship.)

But in reality, role-playing games are simply a way for a group to tell one collaborative story.

There are two major elements to this storytelling. The first is managed by a single person who oversees that particular game or gaming session. In Dungeons & Dragons, this person is called the Dungeon Master, or DM; in other games, this person is the Game Master, the Storyteller, or bears some other title tied to the game or setting. For the sake of simplicity, from this point on, I’ll refer to this person as the DM.

So, the DM manages the setting and sets up the adventure. In this role, the DM will describe what the player characters (or PCs) see and explain the results of their actions. The DM also plays any characters the players interact with. (These are known as NPCs, or non-player characters.) Essentially, the DM creates the sandbox in which the other players play. 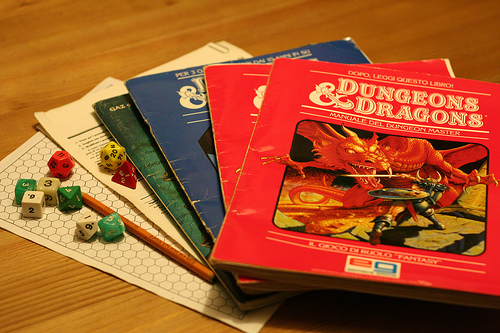 Which brings us to the second element in role-playing storytelling: the players. Each player assumes a role, a character, and plays that character for the length of the session, or the game, if there are multiple sessions. (Some games last months or years, so these characters evolve and grow; players often become quite attached to their characters.)

The PCs navigate the world created by the DM, but their actions and decisions shape the narrative. No matter how prepared a DM is or how carefully he or she has plotted out a given scene or adventure, the PCs determine much of what happens. They might follow the breadcrumbs exactly as the DM laid them out, or they might head off in an unexpected direction, forcing the DM to think on the fly in order to continue the adventure. 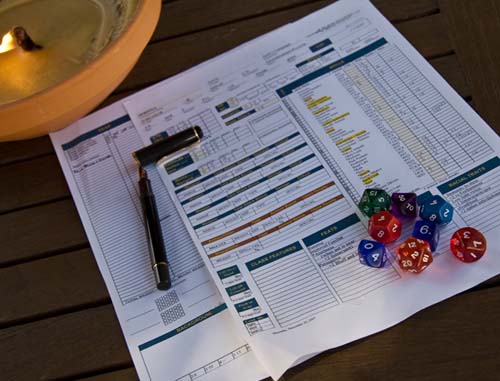 That’s what makes role-playing games so amazing: you never quite know what you’re going to get. The PCs usually don’t know what the DM has in store, and no DM can predict with perfect clarity what the PCs will do. You’re all crafting a story together and none of you knows what exactly will happen or how it all ends.

For instance, I run a role-playing game for several friends that is set in the universe of Buffy the Vampire Slayer, and my PCs routinely come up with solutions to problems and puzzles that I didn’t expect, but that nonetheless would work. They constantly keep me on my toes as a DM, and it’s one of my favorite aspects of the game.

Oftentimes, major events and key moments are determined by dice rolls, adding an element of chance to the story. (In some games, players have replaced dice rolls with a Jenga-style block tower, and they must remove pieces from it to achieve certain goals. That adds a marvelous sense of real-world tension to the narrative tension already present!) 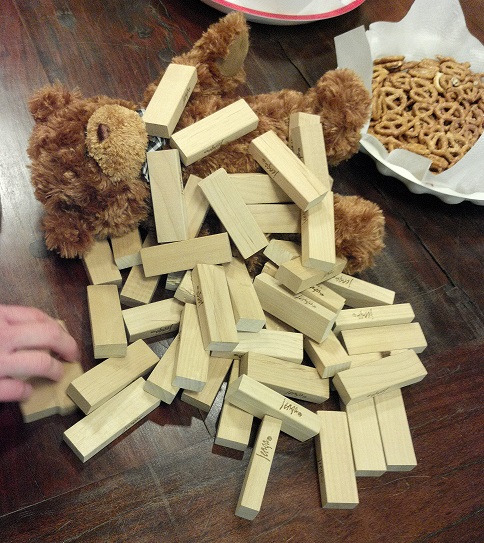 And while I’ve talked quite a bit about the game aspect, some of you might be wondering where the puzzly aspect comes in.

Some of the best, most satisfying puzzle-solving experiences of my life have come from role-playing games.

These puzzles can be as simple as figuring out how to open a locked door or as complicated as unraveling a villain’s dastardly plot for world domination. It can be a poem to be parsed and understood or a trap to be escaped.

There are riddles of goblins and sphinxes, or the three questions of trolls, or even the brain teasers and logic problems concocted by devious fey hoping to snare me with clever wordplay. I’ve encountered all sorts of puzzles in role-playing games, and some of them were fiendish indeed.

One time, during a LARP session (Live-Action Role-Playing, meaning you actually act out the adventure and storytelling), I thought I’d unraveled the meaning of a certain bit of scripture (regarding a key that would allow me to escape the room) and acquired a sword as my prize, only to realize much much later that the key I’d spent the entire session searching for was the sword itself, which unlocked the door and released me.

And designing puzzles for my players to unravel is often as much fun as solving the puzzles myself. Especially when they’re tailored to specific storytelling universes or particular player characters.

(Trust me, it doesn’t matter if you’re dealing with a Jedi or a paladin; riddles stop pretty much everybody in their tracks.)

Whether it’s Dungeons & Dragons or Pathfinder, Legend of the Five Rings or Star Wars, GURPS or Ninja Burger, there’s a role-playing game out there for everyone, if you’re just willing to look.

This post was meant as a brief overview of role-playing games as a whole. If you’d like me to get more in depth on the subject, or if you have specific questions about role-playing games, please let me know! I’d be happy to revisit this topic in the future.