The Museum of Jurassic Technology in Culver City, Los Angeles, has been described as labyrinthine, with its dimly lit, densely populated corridors. Whereas many might think of a labyrinth as something to solve, a challenge to puzzle their way through, the museum will not reward you for seeking a definitive path through its halls. The message of this small building packed with glowing dioramas; wall-mounted phones; ghostly, operatic wailing; a rooftop, dove-flocked garden; and countless other gems, is that there are many true paths and many contradictory realities in the world.

A 2018 profile of the museum argues that your visit will be most fulfilling if you “lose yourself,” not if you find your way. No need to mimic Theseus—the mannequin hands displaying cat’s cradle configurations on the second floor have the only string you’ll need on this journey.

Even the most intricate, bedeviling maze has walls, some kind of structure to give your lost wandering a shape. The Museum of Jurassic Technology is no exception, grouping its exhibits according to five thematic categories: Pins and Needles, Shoes and Stockings, Body Parts and Secretions, Thunder and Lightning, and Insects and Other Living Things. A wide range of curiosities inhabit this taxonomy, from skulls and horns, to plaques bearing folk wisdom about bees, to photographs of the dogs that the USSR sent into space. One room appears almost to pulse with vibrant stereofloral radiographs “revealing,” according to their accompanying description, “unexpectedly complex internal architecture and graceful geometries, [and reminding] us of jellyfish or gothic cathedrals.”

Another room is papered in letters supposedly written to Mount Wilson Observatory. Eight years ago, when I finished touring the museum for the second day in a row, I purchased from the gift shop a bound collection of these letters, entitled No One May Ever Have the Same Knowledge Again. Fittingly, I have always struggled with where in my own home library’s categorical structure to place this book—Science? Urban studies? Science fiction? Inevitably, I always capitulate to slotting it in alongside poetry books, naming poetry a kind of grab-bag genre and also honoring the beauty of lines from the letters like, “The moon is a sphere and it works the clouds by night; it is not a Planet, & should not be interfered with.”

Whether any of these letters were ever actually written to Mount Wilson Observatory is a mystery, as is the question of whether the Italian opera diva highlighted in one exhibit ever lived to sing a single aria. Lawrence Weschler’s book Mr. Wilson’s Cabinet of Wonder: Pronged Ants, Horned Humans, Mice on Toast, and Other Marvels of Jurassic Technology is an enthralling work of investigation into the museum—its background, its design, its veracity. And not for lack of admirable effort, the book offers little to no conclusive evidence one way or the other as to how rooted in fact the exhibits, altogether, may be.

A one-star review of the museum on Tripadvisor ends, “I wish I’d stayed home and read the newspaper instead.” If some semblance of fact-checking and predictable, familiar organizational categories is important to you, then yes, the newspaper might be preferable to taking a trip to this dimly lit cabinet of wonder. If, in contrast, you want to feel like the Minotaur, lost in a labyrinth and caught between realms (human and animal, factual and fantastical), then the Museum of Jurassic Technology is the perfect destination. While the museum did temporarily close down during the early stages of the pandemic, admission is now available via advance appointment Thursday through Sunday. If you’re ever in Los Angeles, go ahead; resist the urge to solve the maze or the mysteries and plan to lose yourself instead.

You can find delightful deals on puzzles on the Home Screen for Daily POP Crosswords and Daily POP Word Search! Check them out!

About six months ago, I shared the story of a secret code lurking in plain sight, sitting atop the Capitol Records Building in Los Angeles. It’s not the only time that buildings have made their way into the blog; in previous posts, we’ve discussed the giant crossword adorning the side of an apartment building in Lvov, Ukraine, as well as the optical illusion awaiting art lovers in a Roman palace.

But it was the only time we’ve discussed a secret code being shared on the side of a building.

Until today, that is.

Yes, my friends and fellow puzzlers, there’s another building out there broadcasting secret messages for all to see. It’s also in California. And this one is more devious than the blinking light on the Capitol Records Building.

Say hello to Almaden Tower, the San Jose headquarters of Adobe, the software company behind Acrobat, Illustrator, and numerous other editing programs.

As you can see, there are four bright yellow circles beside the Adobe logo. These 10-foot-high digital lights all rotate. And if you pay enough attention, you might discover the secret message being broadcast.

The messages began transmitting in 2006. The code was cracked for the first time in 2007, and it wasn’t a brief message either. The lights were secretly transmitting the entire text of the Thomas Pynchon novel The Crying of Lot 49. 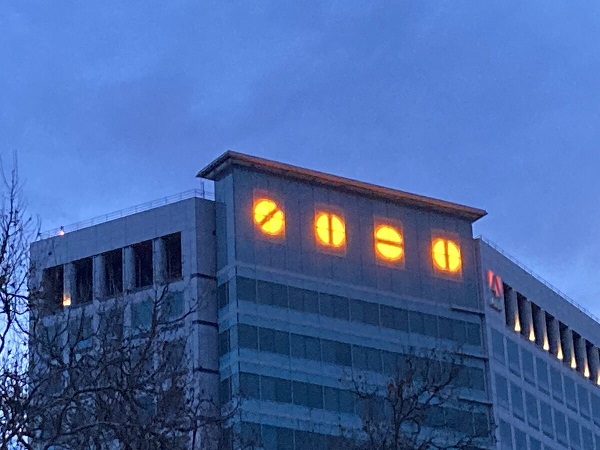 But this was only the first part of the encryption. Even if you uncovered and charted this pattern, you still had to decode the secret messages detailing specific key words that would help you break the Vigenere encryption of the actual text.

It took MONTHS for two tech workers to figure out the semaphore language, decipher the code, and uncover the final message.

So naturally, just like the hidden alien language in the animated sci-fi comedy Futurama, it was replaced with a second, more complex code to be unraveled.

That code, which started transmitting in 2012, wasn’t broken until 2017 when a math professor started streaming footage of the Adobe building and charting the various positions of the circles.

But his examination led him to believe that it wasn’t just text being broadcast this time… it was an audio message. After discovering a chain of symbols that he believed was a space or bit of silence in an audio broadcast, he graphed the results, which resembled an audio wave.

It turns out, his suspicions were correct, and further analysis resulted in the true audio being uncovered: Neil Armstrong’s famous message from the moon landing.

Apparently, a new code and message are currently being brainstormed for Adobe’s devious puzzle monument. Who knows what Ben Rubin, the designer, has in store for solvers this time?

I am fascinated by codebreaking, secret codes, and that whole subgenre of puzzle solving. Probably because I’m pretty bad at it.

Don’t get me wrong, I can crack your bog-standard cryptogram or alphanumeric message. I’m fairly good at identifying patterns and deciphering codes when it comes to simple three-, four-, and five-digit answers in most escape room scenarios.

But when you start getting into encryptions where a letter’s meaning can shift as the coded message evolves — like the one employed by a devious 10-year-old kid in a puzzly letter to Santa years ago — and I quickly find myself stymied.

It leaves me all the more impressed when I read about codebreaking efforts as ambitious as ENIGMA and as silly (and, yet, still quite impressive) as Futurama fans cracking the multiple alien codes in the show just from random snippets.

But codebreaking isn’t just about cleverness, pattern-recognition, and determination.

Sometimes, it’s about knowing where to look.

For instance, in Los Angeles, there have been secret messages being transmitted in plain sight for decades.

Just cast your eyes to the light atop the Capitol Records building in Los Angeles.

The building was designed to look like a stack of records on a turntable, complete with the spindle pointing skyward. It opened in 1956, and the president of Capitol Records at the time, Alan Livingston, wanted the light to send out a message in Morse code. On opening day, Leila Morse — the granddaughter of Samuel Morse, inventor of Morse code — turned the light on.

The secret message being broadcast? “Hollywood.”

The message blinked away for decades. But it wasn’t the only message the light atop Capitol Records would send over the years.

In 1992, to celebrate the fiftieth anniversary of Capitol Records, the code was changed to “Capitol 50” for the entire year. Then it went back to the traditional “Hollywood” code.

A decade later, it was changed again. What was the message? A secret announcement that would excite millions of pop music fans…

But as far as anyone can tell, nobody noticed. This teaser announcement never made the local or national news.

And so far, there hasn’t been a secret message since. At least, not that anyone has noticed.

Still, best keep your eyes on that light. You never know if your favorite artist might send you a secret signal. And it sure beats looking for backwards messages in heavy metal songs.