On Sunday, I was sincerely looking forward to watching the latest edition of Lacey Chabert and Brennan Elliott’s Crossword Mysteries series — entitled Abracadaver — so you can imagine my surprise when I set the DVR to record the film, but found Christmas movies in that time slot instead of my expected puzzly entertainment for the evening.

It was a mystery about a mystery. Layers upon layers, my friends and fellow PuzzleNationers.

I hit the internet to find out just what happened to Abracadaver.

As it turns out, Hallmark Movies & Mysteries, which originally had Friday, October 25th as the scheduled start date for their round-the-clock parade of Christmas content, opted to start it a week early. And since the newest edition of the Crossword Mysteries isn’t holiday-themed, it got the boot. 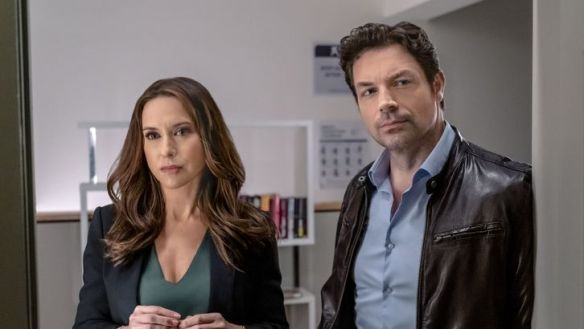 But wait? Abracadaver was all finished and ready for prime time. So when WILL we get to see the third edition of Crossword Mysteries?

Well, according to star of the film Lacey Chabert, it won’t be until next year. On her Instagram, she posted:

“Hi friends! ‘Crossword Mysteries: Abracadaver’ will now air in January instead of Sunday. Miracles of Christmas starting today on @hallmarkmovie is an early Christmas present for the millions of fans who love the holiday season. We are very proud of ‘Abracadaver’ and excited to share it with you in the new year!”

That’s all very well and good, but this was clearly a sudden rescheduling decision, since they’ve been promoting these back-to-back weeks of Crossword Mysteries for months. As of Thursday last week, it was still on the schedule.

So, I decided to do a little digging. Perhaps ratings were the reason for rescheduling, I thought.

Well, according to the cable ratings on October 13th — the night Proposing Murder debuted on the channel — the movie was 78th for the night, pulling in a 0.10 rating for viewers 18-49.

Okay, so Proposing Murder didn’t exactly dominate the night. But it was still a vast improvement on the previous week for Hallmark Movies & Mysteries. In the same time period on October 6th, their rating was 0.07 in viewers 18-49, making them 102nd for the night.

102 to 78 is a pretty solid jump from one week to the next. But maybe the Christmas-centric programming would match crossword-centric viewing numbers?

The cable ratings for October 20th went live this morning, but unfortunately, I can’t give you definitive numbers, because Hallmark Movies & Mysteries failed to make the top 150 cable programs for the night. (Since it wasn’t airing any new/original content that night.)

And it seems like the Hallmark audience is not particularly pleased with the decision.

On the HMM Facebook page — which is all decked out for Christmas already — numerous people asked why Crossword Mysteries wasn’t airing as scheduled.

The channel replied: “We decided to start Christmas programming a week early. A Christmas present to the millions of fans excited for the start of Miracles of Christmas. We regret any inconvenience it may have caused.”

As you might expect, that answer didn’t really fly with disappointed puzzlers. One commented, “I was looking forward to this premiere for weeks. I don’t celebrate Christmas and it’s OCTOBER. I don’t see why the Christmas movies couldn’t have waited a week until crossword mysteries premiered. I’m really disappointed.”

It’s been a tumultuous journey for the Crossword Mysteries this year. From the announcement in March of three follow-ups to the original film, the number was cut down to two in the intervening months (though Crossword Mysteries 4 is still listed on IMDB), and then the back-to-back premieres being scuttled and the third film pushed to January.