Fluxx has been one of Looney Labs‘s flagship products for over two decades now. It’s the card game with constantly changing rules, a game where the path to victory can vanish or appear at a moment’s notice.

But after Batman Fluxx, Firefly Fluxx, Holiday Fluxx, and many other versions, what more can they do with the concept to keep it fresh and interesting?

As it turns out, plenty. And with their latest release, Math Fluxx, the Looney Labs crew proves they still have plenty of tricks up their sleeves.

But instead of matching images like you do in most versions of Fluxx, in Math Fluxx players have to use keeper cards with numbers on them in order to complete different mathematical goals.

Some of the goals are simple, like having 4 and 2 as keepers to make 42 (the answer to life, the universe, and everything). But other goals are more complex, like forming two pairs of keeper cards like a poker hand, or having the highest score on the table in keeper cards.

For example, there’s a goal where you win if you’re displaying your own age with keeper cards. But since people playing will probably have different ages (and therefore, different keepers for that goal), you could lose by playing that goal too early.

Achieving these goals requires more strategy than your usual game of Fluxx — which is built more on seizing opportunities, since the gameplay is often quite chaotic — and the game’s creators doubled down on this by introducing new rule cards that let you achieve some of the goals in different ways.

For instance, instead of forming 42 with a 2 card and a 4 card, one new rule would allow you to complete that goal by playing keeper cards that, when multiplied, form 42.

These new wrinkles add a tremendous amount of depth to the gameplay (and I haven’t even mentioned the meta rule cards that alter gameplay for an entire session rather than a few turns, if players are feeling particularly ambitious). 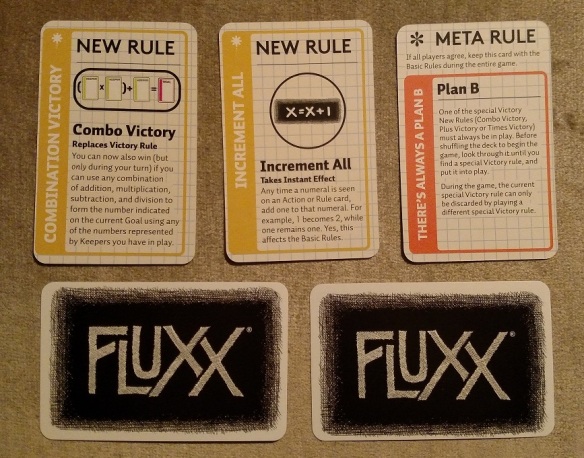 I was thoroughly impressed by the variety in new rules, goals, and gameplay tweaks introduced by Math Fluxx. It shows that there’s plenty of life in the Fluxx franchise, and that spirit of innovation and playfulness infuses each round of play, encouraging players to be just as clever and creative with their own gameplay.

Math Fluxx will be available March 9th, but you can preorder it by clicking here! And to check out all of our reviews of Looney Labs games and products, click here!