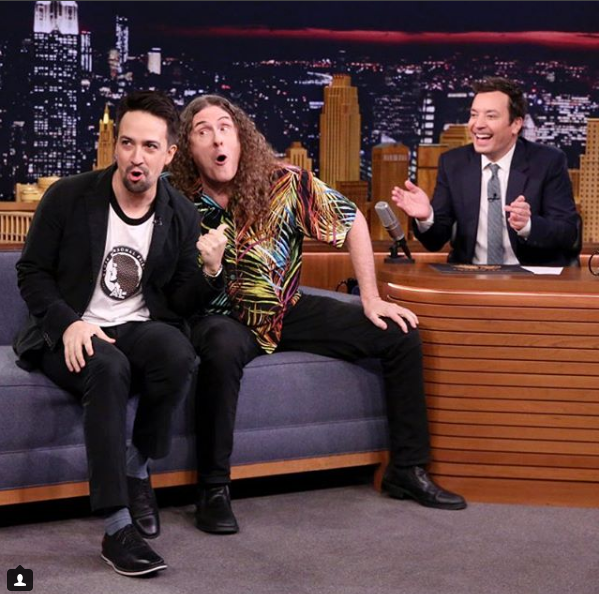 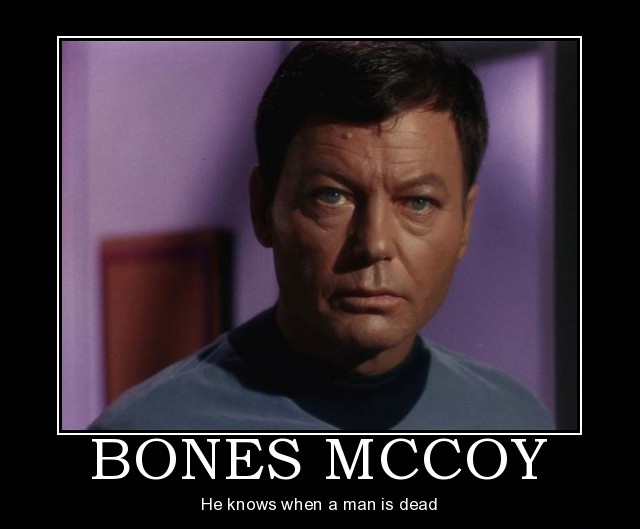 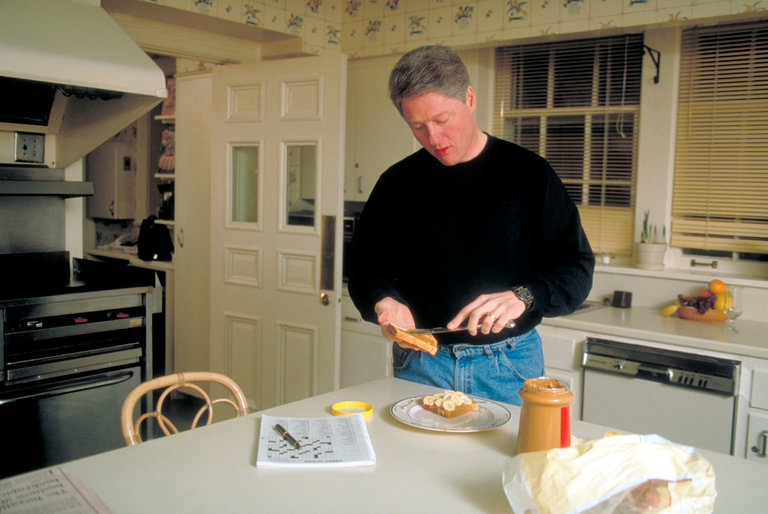 The New York Times Crossword celebrated 75 years of puzzles back in February, and ever since, they’ve been commemorating that puzzly milestone with a series of established constructors collaborating with celebrity guests to create special monthly puzzles.

It started on February 15th, the 75th anniversary, with a collaboration by Patrick Blindauer and actor Jesse Eisenberg offering some food for thought.

And for the May installment of this celebrity series, none other than former president Bill Clinton tried his hand at creating a crossword alongside judge and constructor Victor Fleming for the May 12th edition of the puzzle.

The puzzle was offered free online by The New York Times. Although the Friday puzzle is usually themeless, there was a link between three of the main answers, DON’T STOP, THINKING ABOUT, and TOMORROW, which of course spell out the title of his campaign song.

Will Shortz offered further details on the creative process:

In the case of today’s puzzle, Judge Fleming constructed the grid, with some input from Mr. Clinton. The president wrote most of the clues. When the judge proposed tweaks to certain clues, Mr. Clinton objected: “Too easy and boring. Might as well print the answers in the puzzle.”

I found it to be a pretty fair solve, although there were a few outlier answers that were much, much tougher than the rest of the field. (Either that or I need to bone up on my Indonesian geography.)

Shortz also offered a glimpse of the celebrity constructors to come, teasing readers with mentions of “a pop singer with a No. 1 hit, a noted fashion designer, a standup comedian, a venerable TV journalist, a morning TV host, a six-time Emmy-winning actor, and a sitting U.S. senator, among others.”

It’ll be interesting to see which celebrity solvers have accepted the challenge of constructing a puzzle of their own.

Even if you don’t know the science behind it, you’ve probably heard of Schrodinger’s cat at some point in your life. If you haven’t, let me give you the short short version: there’s a box with a cat in it, and a substance that may or may not release inside the box and kill the cat.

So until you open the box, there’s no way of knowing whether the cat is alive or not. Schrodinger posited that, since we can’t know which is the case, both are true until the box is opened. It’s essentially a thought experiment which delves far deeper into quantum mechanics and particle physics than I’m going to in this review.

But the idea that someone created a card game based on the concept of Schrodinger’s cat is not only audacious, but pretty impressive. (And the puns are just the icing on the cake.)

[Some of the cat physicists in the game: Sir Isaac Mewton,
Sally Prride, Madame Purrie, and Neil deGrasse Tabby.]

Schrodinger’s Cats was funded through a Kickstarter campaign last year, and it’s the brainchild of Heather Wilson, Heather O’Neill, and Chris O’Neill. A mix of bluffing, deduction, and wagering, this game combines Name That Tune-style bravado and strategy with Poker-style game play.

Each player is a cat scientist forming hypotheses on how many boxes contain live cats, dead cats, or nothing at all. (While Schrodinger is away, of course. As the old saying goes, when the scientist’s away, the cats will play. Or something like that.)

Once the cards are dealt, players look at their box cards and see what each box contains, hiding this info from the other players. Then the players begin hypothesizing. They wager on how many of each result are in ALL of the boxes on the board. So, in the game layout above, there are nine boxes, and each scientist has to wager what’s in all the boxes.

But instead of starting with a high guess and then wagering lower totals (as you would in Name That Tune), you start low in Schrodinger’s Cats and wager upward. Scientists can also affect the wagering by “showing findings” — revealing one or all of their own boxes to either prove their hypothesis or make the other players doubt their own — or by swapping out some boxes. (Each cat scientist card also allows for a one-time-use special action for a player, which can also prove useful.)

When a player either refuses to wager higher or challenges another player’s hypothesis by yelling “Prove it!”, all of the boxes are revealed and the hypothesis is proven or debunked (meaning the player stays in the game or leaves). After multiple experiments (rounds of play), one character remains and wins the game (and an honorary doctorate from Cat Tech University).

What I enjoyed most about this game (other than all the pseudo-scientific jargon involved in playing the game) was the wagering, bluffing, and reading of opponents that is integral to the game play. With so few possible cards to reveal (only four, in varying quantities, as opposed to 13 different cards across four suits in poker), it’s not nearly as challenging as the classic card game, but offers a lot of similar game mechanics.

It’s great fun to try to outwit or read your fellow players in order to make the best hypothesis, and that’s a sort of puzzling that is often left behind in puzzle games. Often, you’re so busy trying to achieve a certain goal or acquire points that you stop actively interacting with the other players; but in Schrodinger’s Cats, a lot of puzzling and game play takes place in the actions and reactions of the other players. It’s a delightfully social game.

Although you can play with as few players as two or as many as six, I recommend playing with at least four characters to keep the game moving and interesting. Between raising hypotheses, showing findings, and trying to puzzle out what your fellow players are hiding, the more uncertainty you can introduce to the game, the better.

Schrodinger’s Cats is available from 9th Level Games and can be found here.