It’s 2018, and these days, it seems like crosswords are everywhere. They’re in the paper, on the newsstands, and even in your pocket.

And now, they’re making it onto TV with a Hallmark Channel original movie!

Oh yes, check out this snippet from the recent press release:

Lacey Chabert and Brennan Elliott are no strangers to Hallmark themselves, having starred in three movies together since 2015: All of My Heart, A Christmas Melody, and All of My Heart: Inn Love. 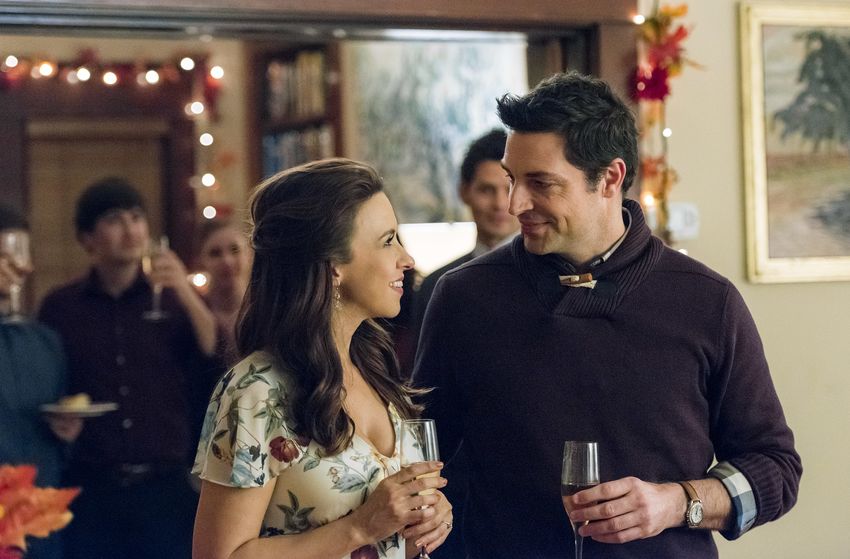 Here’s a sneak peek of what you can expect from the film:

A brilliant crossword puzzle editor (Chabert) finds her life turned upside-down when she is pulled into a police investigation after several of the clues in her recent puzzles are linked to unsolved crimes. Proving her innocence means leaving the comfort of her sheltered world and working with a tough police detective (Elliott), puzzling through clues together in order to crack the case, as the two are fish out of water in each other’s worlds.

As far as we know, there’s no airdate scheduled yet for the film, but we’ll keep you posted when we know more.

Perhaps Will himself will have more details for us by the time the American Crossword Puzzle Tournament rolls around in March.

Still, what an unexpected bit of news for puzzlers everywhere. 2018, what other surprises are lurking up your sleeve?

And I’m overjoyed to have Will Shortz as our latest 5 Questions interviewee!

Without a doubt the most famous name in crosswords today, Will Shortz is the crossword editor for the New York Times, a position he’s held since 1993 (after putting in time with both GAMES Magazine and our friends at Penny/Dell Puzzles). In his time as editor, he’s been credited with spearheading a sharp decrease in crosswordese in Times puzzles, as well as offering a greater level of visibility and acknowledgment for individual constructors.

He continues to serve as the amiable face of crosswords across all forms of media — on the radio with NPR, on television in The Simpsons and How I Met Your Mother, and in theaters with the documentary Wordplay. (He even provided the Riddler’s puzzle clues that so bamboozled the Dark Knight in the film Batman Forever.)

But solvers interested in puzzles beyond crosswords will also have a treat in store for them in 2014! The folks at Penny Press have teamed up with Will to create Will Shortz’s WordPlay, a magazine featuring crafty variety puzzles and crossword variants created by some of today’s top constructors.

Will was gracious enough to take some time out to talk to us, so without further ado, let’s get to the interview!

5 Questions for Will Shortz

1.) As the world’s first (and only) degree-holding enigmatologist, was becoming the editor of the New York Times crossword always a goal you had in mind, or did you foresee yourself doing something else with your singular degree?

Since childhood I’d always planned a career in puzzles, just not as crossword editor for The Times. In fact, I didn’t envision a career with crosswords at all. I imagined myself in an attic or a tiny house somewhere making novelty puzzles and sending them out for publication — probably living in poverty, but doing what I wanted. I fell into puzzle editing without a lot of planning.

But I do have a law degree from the University of Virginia (J.D., 1977), so if puzzles ever end up not working out for me, I always have that to fall back on!

I’m not good at predicting the future. But I will say that crosswords are the best and most flexible form of puzzle ever devised, because they involve language (which we all use) and connect with virtually everything in life. They can be made easy or hard, small or large, tricky or straightforward, topical or of general interest. There’s a crossword for everyone and every mood.

Also, there’s something very appealing about filling empty squares. As humans, I think we like to fill empty spaces, and doing that in a crossword seems to satisfy some elemental human need. Even if print media die someday, I think crosswords will probably exist forever in one form or another.

[Here, Will and constructor Merl Reagle appear with the Simpsons in a
promotional pic for the episode “Homer and Lisa Exchange Cross Words.”]

3.) I could ask you how far in advance you choose puzzles for publication (considering the Times’ famous incremental rise in difficulty throughout the week), or inquire about your work as NPR’s resident puzzle master, but to be honest, I’m more curious about what you do when you’re NOT doing puzzles. What other activities or hobbies do you enjoy?

As friends know, I’m almost as fanatical about table tennis as I am about puzzles (emphasis on *almost*). I own my own club — the Westchester Table Tennis Center, just north of New York City. It’s one of the largest table tennis facilities in North America, and I believe it’s the nicest (which I say having played in almost 200 clubs in 43 states and two Canadian provinces).

At the moment I’m close to finishing a personal goal — to play table tennis every day this year. As I write this (on Dec. 17), I’ve played every single day since Jan. 1 — 351 days in all. And I’m filming myself every day as proof. At the end of the year, if I succeed, some friends of mine in Hollywood have promised to edit a 3- or 4-minute video of me playing every day, which I’ll throw up on YouTube.

My ultimate goal is to become national table tennis champion for my age.

No plans for anything else. I love what I’m doing. I’ve been the crossword editor of The Times now for 20 years, overseer of the U.S. team for the World Puzzle Championship for 22 years, puzzlemaster for NPR’s “Weekend Edition” for almost 27 years, director of the American Crossword Puzzle Tournament for 36 years, and program director for the annual convention of the National Puzzlers’ League for 38 years. That’s plenty to keep me occupied.

5.) If you could give the readers, writers, and puzzle fans in the audience one piece of advice, what would it be?

I have two goals in life: One, to make the world a little better for being here. And Two, to enjoy myself. I think that’s a good philosophy for anyone.

Many thanks to Will for his time. You can follow him on Twitter (@Will_Shortz) and listen to his NPR appearances on Weekend Edition here! And keep your eyes peeled for the first issue of Will Shortz’s WordPlay, which will be hitting newsstands in February!

Oh, and I suppose you could always check out the New York Times Crossword, if you’re so inclined. =)