Role-playing games are high on the list of my favorite pastimes, and whether you’re looking for a fun game, a puzzly experience, or a chance to tell some exciting, engrossing stories with friends, you’re bound to find something to enjoy in a role-playing session.

And if you’ve never tried out a role-playing game or dipped a toe into the fascinating world of RPGs, tomorrow is the perfect opportunity for you to do so.

Established in 2007, Free RPG Day is a collaborative event where RPG publishers team up with game shops, hobby shops, and other game retailers to celebrate role-playing games and try out brand-new and unfamiliar games.

Stores around the world will be offering free adventure modules and quick-play rulebooks for all sorts of different role-playing games — covering everything from classic D&D-style games to spacefaring campaigns — much of it created specifically for Free RPG Day!

Companies like Goodman Games, Paizo Publishing, Green Ronin, Off World Designs, and many more are participating, along with game shops all over the U.S. and across the world. 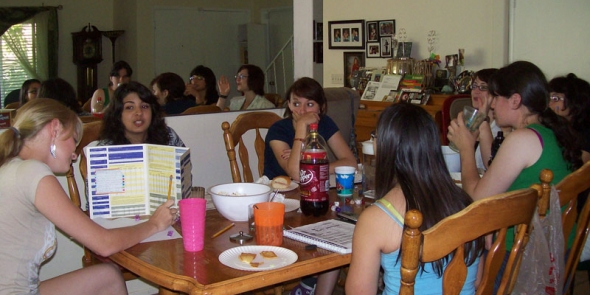 You can use this store locator to find the nearest participating location, but worry not if you can’t get out to a friendly local game shop!

There are all sorts of online resources celebrating the day as well. For instance, the team at DriveThruRPG are offering a ton of free downloads for you to sample! (Not to mention the articles we’ve written about the subject over the years.)

Will you be celebrating Free RPG Day, fellow puzzlers and PuzzleNationers? Let us know in the comments section below! We’d love to hear from you!

And I’m overjoyed to have James Ernest as our latest 5 Questions interviewee!

James Ernest represents Cheapass Games, a company with a brilliantly simple rationale: they know you have board games at home, so why jack up the price of their games by making you buy more dice, chips, or tokens? Their games contain exactly what you need to play the game, and describe precisely what you’ll need to scrounge up from other games in order to play.

As president and game designer, James is instrumental not only in maintaining the Cheapass Games legacy of great games for a fair price, but he’s also adept at utilizing Kickstarter campaigns and social media to communicate directly with the devoted board game and card game audience. In doing so, he’s helped introduce numerous hilarious and innovative games to the market, including:

James was gracious enough to take some time out to talk to us, so without further ado, let’s get to the interview!

1.) For nearly two decades now, the Cheapass Games brand has been synonymous with affordable games with tongue-in-cheek humor and high replay value. How do you know when a game is right for your brand? What role do you play in bringing these games to market?

I’m the designer as well as the publisher for Cheapass Games, so I play nearly all the roles. I try to create products that fit into that format. When I make something that doesn’t fit the format, I often look for other ways to bring it to market, such as finding another publisher, or using a separate imprint under Cheapass Games.

For a while I used “James Ernest Games” as an imprint for my higher-priced games, though I currently release everything as Cheapass. I also used the “Hip Pocket” brand for smaller, more abstract games, and that one will be coming back next year.

2.) Many of the games in your library rely on a combination of strategy and step-by-step chain thinking, both skills most puzzle enthusiasts have in spades. Are you a puzzle fan? And what about that style of gameplay appeals to you?

The challenge in creating a strategy game is to make a puzzle with variety, so it can be replayed without getting dull. Part of that variety comes from rules that can give rise to meaningfully different game paths, and part of it comes from the interaction of players with different strategies.

As you’ve mentioned, I also like games to have stories, and that works in a similar way: the story has to be open-ended enough that it can proceed differently each time. The game is more like an environment where the players tell their own stories, rather than a way to tell a linear story. This is obvious for RPGs [roleplaying games] but I think it’s true for other games as well.

3.) You’ve created games of your own as well as helping others bring their games to life. What puzzles and board games, either in gameplay or in the experience of producing them for sale, have most influenced you?

I learned a lot about game construction from playing and working on Magic: the Gathering. A lot of my games have decks of different card types, balanced to produce the right mix of hands, based on my experience doing deck construction in Magic.

I also draw a lot of my approach to games from Pitch, which is a cutthroat trick-taking game. In a nutshell, you can choose different strategies in that game, either to play conservatively and win slowly, or to take risks and have the potential to win quickly or move backwards. Neither of those strategies is dominant and that makes the game good. Of course I also play a lot of poker, which contains similar choices.

My next project is Pairs, a “New Classic Pub Game,” which I will be Kickstarting in February. After that, I have a couple of older Cheapass Games that I want to bring back into print. And I’m working on a new tabletop miniatures game called Cagway Bay, which is pirate-themed and diceless. I have a number of new game projects as well, but right now I’m not announcing any of them because I can’t be sure when they will be ready.

5.) If you could give the readers, writers, aspiring game designers, and puzzle fans in the audience one piece of advice, what would it be?

If you want to create things, there is no substitute for practice. Don’t just read about games; don’t just play them. You have to make a lot of games.

Many thanks to James for his time. You can check out the latest news from Cheapass Games on their website — including their upcoming Kickstarter campaign for the game Pairs! — or follow James on Twitter (@cheapassjames). I cannot wait to see what he and the great folks at Cheapass Games come up with next.