Corn mazes are a wonderful puzzly tradition synonymous with the arrival of Fall and the end of Summer.

And one particular corn maze in Evansville, Indiana, has captured the attention of the masses with one lifelong Star Wars fan’s tribute to Carrie Fisher, the actress who portrayed Princess Leia Organa, who sadly passed away last year. 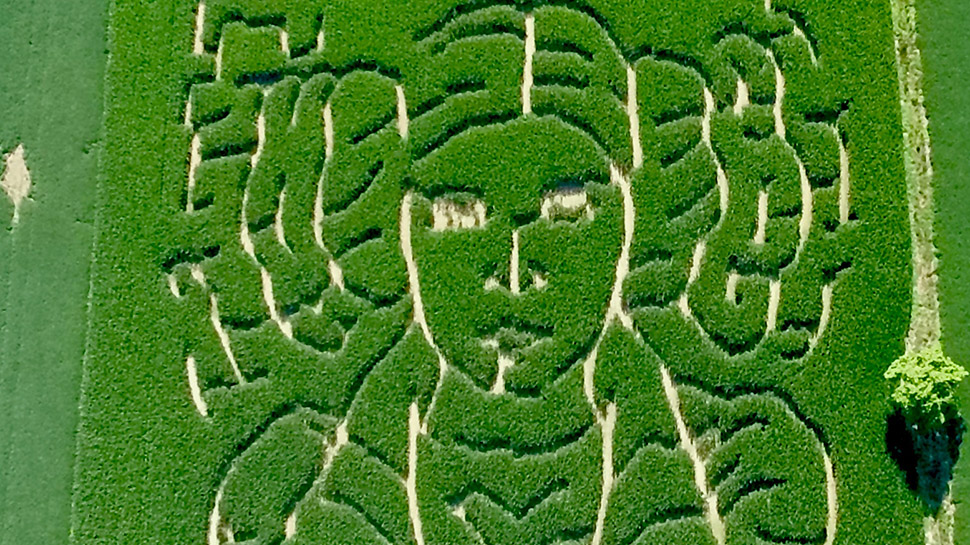 The maze was designed by Jeremy Goebel of Goebel Farms, who has been responsible for planning and executing corn maze designs as part of his duties on the farm — he’s been there 16 years! His previous maze designs include Darth Vader, the film The Force Awakens, and the starship USS Enterprise from the Star Trek series.

Each design is quite time-consuming to bring to life. Planting the Carrie Fisher design took 40 minutes — amazingly fast, courtesy of a tractor computer and GPS coordinates — and the initial plan dates back to February. 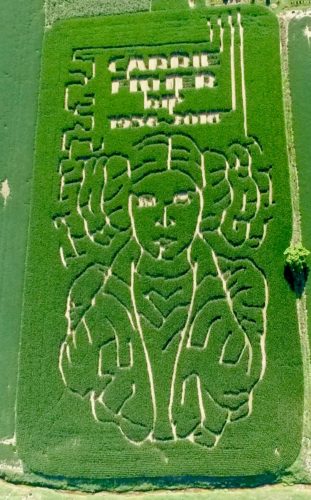 From an article in The Evansville Courier & Press:

The process used to be much more labor-intensive. The first year the Goebel family decided to make a corn maze they cut the rows by hand in mid-August, when the corn was tall and strong.

“It was not a great time to make a maze,” he said.

The second year they cut out the design earlier. The process involved a lot of guesswork. Goebel had to measure out the pathways in the field as he went.

The maze is now open to the public for their enjoyment. As both a Star Wars fan and a maze enthusiast, this is the perfect puzzly way to combine those worlds in a satisfying fashion for all.

Do you know of any other dazzling corn mazes that will be challenging fellow puzzlers this Autumn, PuzzleNationers? Let us know in the comments below!

Hello fellow puzzlers and PuzzleNationers! It’s Star Wars Day, and what better way to celebrate than with a puzzly Star Wars brain teaser!

A fellow Star Wars fan found this logic puzzle online and tasked us with solving it. Can you unravel the fiendish Imperial plot? Let’s find out!

The Empire came up with a brilliant plan in order to trap various members of the Rebel Alliance: creating a fake Rebel summit. Each Imperial agent involved would invite a Rebel to the summit while posing as one of the Rebels being invited.

It would have worked perfectly, except for the fact that Admiral Ozzel posed as the person that he had invited. OOPS. Courtesy of Ozzel’s bumbling, the Rebels were warned ahead of time and armed themselves, hoping to turn the tables on the Empire.

Thanks to Han Solo’s timely warning, Luke had hidden his lightsaber and a vibroknife with R2-D2 and C-3PO respectively. These extra weapons allowed the seven Rebel agents of them to escape. It also helped that Admiral Ackbar arrived last in his ship, Home One.

Each Rebel arrived in a different spaceship, but two Rebels hitched a ride with fellow agents, so only five spaceships were involved.

Here are your clues:

1. Leia, having been warned by Han, carried a concealable Holdout Blaster. She did not arrive in an X-Wing, nor did she fly the Millennium Falcon.

2. Han wouldn’t let anyone fly his baby. Han carried his Heavy Blaster Pistol, ready to shoot the Imperial who invited him while posing as him. This naturally made Han suspicious.

3. When Admiral Ackbar saw who invited him, he put his Force Pike to the Imperial’s throat. He was not invited by Darth Vader, who had posed as R2-D2.

4. C-3PO arrived on the Tantive IV, along with another passenger. This was not the ship Lando used.

5. The Lady Luck was flown by the man invited by Admiral Piett. Its pilot, who traveled alone, carried a Blaster Rifle with him. He gambled a bit, and almost crashed into Luke’s X-Wing. The Imperial who invited him posed as Admiral Ackbar.

6. Grand Moff Tarkin invited Admiral Ackbar. He did not pose as Luke Skywalker, nor did he pose as Leia.

8. Leia was led to believe that Luke invited her to the summit. Emperor Palpatine invited Luke while posing as Leia. R2-D2 delivered his weapon to the Rebel so he could keep his father busy long enough for everyone to escape.

Good luck, fellow puzzlers! Although the puzzle is a bit easier if you’re familiar with the Star Wars Universe, any solver should be able to crack this puzzle with the clues provided!

Let us know if you solved it in the comments below! And May the Fourth Be With You!