The worlds of puzzles and mathematics overlap more than you might think. I’m not just talking about word problems or mathy brain teasers like the Birthday Puzzle or the jugs of water trap from Die Hard with a Vengeance.

For twenty-five years, Martin Gardner penned a column in Scientific American called Mathematical Games, adding a marvelous sense of puzzly spirit and whimsy to the field of mathematics, exploring everything from the works of M.C. Escher to visual puzzles like the mobius strip and tangrams. He was also a champion of recreational math, the concept that there are inherently fun and entertaining ways to do math, not just homework, analysis, and number crunching.

And on more than one occasion, Gardner turned to the genius and innovative thinking of John Horton Conway for inspiration.

Conway was best known as a mathematician, but that one word fails to encapsulate either his creativity or the depth of his devotion to the field. Conway was a pioneer, contributing to some mathematical fields (geometry and number theory among them), vastly expanding what could be accomplished in other fields (particularly game theory), and even creating new fields (like cellular automata).

Professor of Mathematics, Emeritus, Simon Kochen said, “He was like a butterfly going from one thing to another, always with magical qualities to the results.” The Guardian described him in equally glowing terms as “a cross between Archimedes, Mick Jagger and Salvador Dalí.”

His most famous creation is The Game of Life, a model that not only visually details how algorithms work, but explores how cells and biological forms evolve and interact.

Essentially, imagine a sheet of graph paper. In The Game of Life, you choose a starting scenario, then watch the game proceed according to certain rules:

The process plays out from your starting point completely without your intervention, spiraling and expanding outward.

It’s the ultimate if-then sequence that can proceed unhindered for generations. It is a literal launchpad for various potential futures based on a single choice. It’s mind-bending and simple all at once. (And you can try it yourself here!)

But that’s far from Conway’s only contribution to the world of puzzles.

Not only did he analyze and explore puzzles like the Soma cube and Peg Solitaire, but he created or had a hand in creating numerous other puzzles that expanded upon mathematical concepts.

I could delve into creations like Hackenbush, the Angel Problem, Phutball/Philosopher’s Football, Conway’s Soldiers, and more — and perhaps I will in the future — but I’d like to focus on one of his most charming contributions: Sprouts.

Sprouts is a pencil-and-paper strategy game where players try to keep the game going by drawing a line between two dots on the paper and adding a new dot somewhere along that line.

The rules are simple, but the gameplay can quickly become tricky:

Check out this sample game:

It’s a perfect example of the playfulness Conway brought to the mathematical field and teaching. The game is strategic, easy to learn, difficult to master, and encourages repeated engagement.

In a piece about Conway, Princeton professor Manjul Bhargava said, “I learned very quickly that playing games and working on mathematics were closely intertwined activities for him, if not actually the same activity.”

He would carry all sorts of bits and bobs that would assist him in explaining different concepts. Dice, ropes, decks of cards, a Slinky… any number of random objects were mentioned as potential teaching tools.

Professor Joseph Kohn shared a story about Conway’s enthusiasm for teaching and impressive span of knowledge. Apparently, Conway was on his way to a large public lecture. En route, he asked his companions what topic he should cover. Imagine promising to do a lecture with no preparation at all, and deciding on the way what it would be about.

Naturally, after choosing a topic in the car, the lecture went off without a hitch. He improvised the entire thing.

Of course, you would expect nothing less from a man who could recite pi from memory to more than 1100 digits? Or who, at a moment’s notice, could calculate the day of the week for any given date (employing a technique he called his Doomsday algorithm).

Conway unfortunately passed away earlier this month, due to complications from COVID-19, at the age of 82.

His contributions to the worlds of mathematics and puzzles, not to mention his tireless support of recreational math, cannot be overstated. His work and his play will not soon be forgotten.

If you’d like to learn more about Conway, be sure to check out Genius at Play: The Curious Mind of John Horton Conway by Siobhan Roberts.

[My many thanks to friend of the blog Andrew Haynes for suggesting today’s subject and contributing notes and sources.] 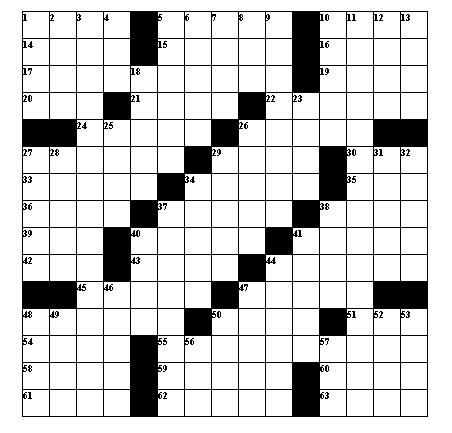 This is an innocuous looking grid. A smattering of black squares. Classic diagonal symmetry. At first glance, this could be any crossword.

But this isn’t any crossword. This is The Crossword From Hell.

A brilliantly tongue-in-cheek takedown of obscure cluing and other frustrating puzzle conventions, The Crossword From Hell challenges you to come up with, among other things:

I have to confess, I love this puzzle. The mix of fill-in-the-blank clues that could be ANYTHING and the incredibly obscure, yet specific, requests for trivial minutiae delightfully skewer the worst crossword constructing practices, particularly crosswordese.

This parody puzzle is the creation of Dr. Karl M. Petruso, an anthropology professor at the University of Texas at Arlington. I reached out to Dr. Petruso regarding his hilariously snarky rejoinder to the puzzle community, and here’s what he had to say about the puzzle:

Yes, that puzzle is my only foray into crossword composition (well, fake composition, truth be told. I did field at least one email from somebody who said he had solved all the clues but one, and he believed that I cheated on that word. I suspected he was pulling my leg…).

Since my grad school days in the ’70s I have been a snooty puzzle solver: only the NYT puzzle, and even then, nothing earlier than Thursday, always in ink. I was able to solve maybe a third of the Saturday puzzles, but it took me well into the next week to do it. I love the clever themes and wordplay in the Sunday puzzles, and could often complete them, but by no means every time.

I decided to take my frustrations out on clues that were at once obscure and too much trouble for someone as lazy as me to remember the words for. Creating that puzzle was very satisfying, kind of like an exorcism or something. I don’t know. I have always thought the web is the perfect place to post snark and work out dark impulses.

Perhaps the funniest thing about this exaggerated crossword is that, to many who struggle with tougher crosswords, it probably doesn’t seem exaggerated at all.

Great crossword puzzles manage to be clever and challenging while sidestepping many of the pitfalls featured in The Crossword From Hell. But this is a wonderfully funny reminder of what you should strive NOT to do.

A huge thank you to Dr. Petruso for his time AND his creative efforts on behalf of puzzlers everywhere.